At Muslim Sunday school, learning about Islam — and correcting misconceptions 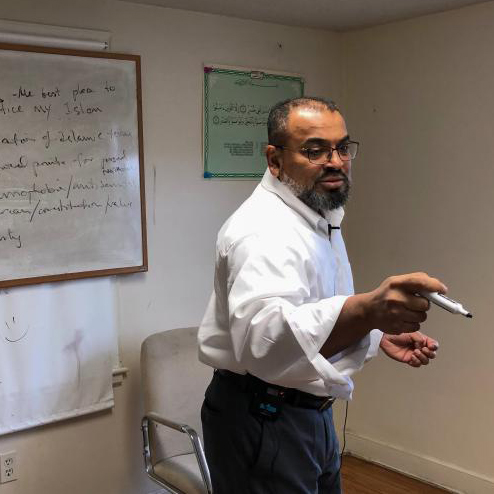 Off a highway in central Connecticut is the mosque with a 400-student Muslim Sunday school.

More guards are on patrol these days. And for the older students in the transition class, talking about Islamophobia is not only welcomed, but encouraged. The teenagers are in their final years of high school and will be heading off to college soon.

So before they head out into the “real world,” they aren’t just learning the tenets of Islam, said Dr. Reza Mansoor, their teacher on a recent Sunday. He’s coaching them on how to defend their faith from misconceptions.

Mansoor is president of the mosque, called Islamic Association of Greater Hartford, and he is big on translating Islamic phrases and words. Take jihad, for instance. It means a struggle — usually a personal, spiritual one — but if you hear jihad in the media, he said, it’s almost always associated with extremists who commit violence in the name of Islam, like the 9/11 terrorists.

“If you use jihadist for terrorist, you unfortunately give the terrorists… a position much higher than what they are,” Mansoor told his students.

People tend to fear what they don’t know. And when Islam is viewed as a threat, that makes Muslims a target.

“Just imagine someone calling you a terrorist and telling you to go home,” Aissa Bensalem, 17, said during the class. “I had one of my friends say that they were scared to come to the masjid because they were afraid that they were going to be shot on.”

Their mosque underwent an active shooter training just the other week. It’s part of a bigger security plan that has involved conversations with the FBI and local police, according to Mansoor, who said security was beefed up after the mass shootings at the Tree of Life synagogue in Pittsburgh and the mosque in Christchurch, New Zealand.

But for Mansoor, a cardiologist by trade, a conversation about security is incomplete without talk of “changing the narrative.” After 9/11, he founded the Muslim Coalition of Connecticut to counter the anti-Muslim rhetoric that he says is perpetuated in the media. Years after the terrorist attack, some Americans still see U.S. Muslims as anti-American.

Mansoor tells his students that Islamophobia is driven, in part, by false information. So he encourages them to be media-savvy and to correct those misconceptions when confronted with them. 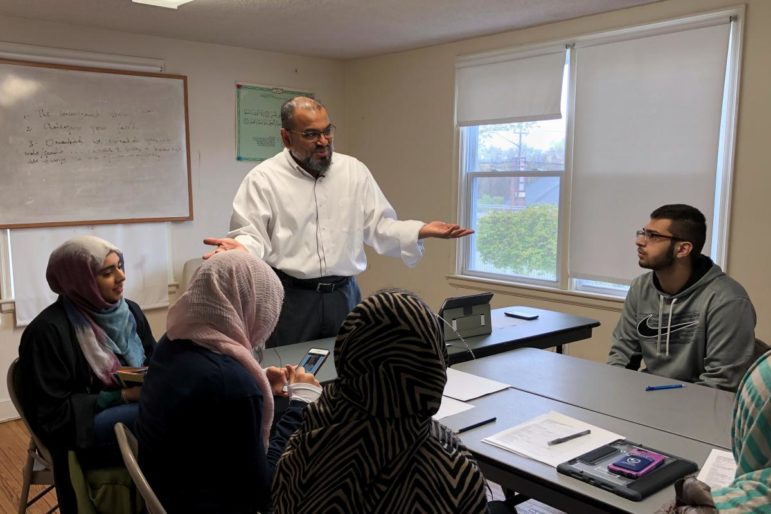 Dr. Reza Mansoor talks to Muslim students in this Sunday school class about correcting misconceptions about their faith.

“This is your job,” he said. “You are the next generation of Muslims to be able to show that Islamic values and American values are completely compatible.”

On this Sunday, they practice being a “modern voice of Islam,” as Mansoor put it, by having a debate. He wrote the topic on the whiteboard: “America is the best place to practice my Islam.”

“And you can bring Islamophobia rhetoric, media, all of that into it,” Mansoor instructed. “Some misconception that’s in the media and you clarify that, you get extra points for it, OK?”

They split into groups. One team leaned heavily on the constitutional protections for religious freedom. Student Ayesha Pasha responded on rebuttal: “It’s not the government that’s going into mosques or synagogues and holding mass shootings,” she said. “It’s the people that believe in these xenophobic ideas.”

Nonetheless, Mansoor told the class, he still thinks America is a great place to practice Islam — that it remains a safe haven for immigrants like himself. Mansoor explained how he came from Sri Lanka almost 30 years ago after his medical school there was bombed.

“We don’t want the Muslim ban and the ‘Islam hates America’ and stuff to change this nation that welcomes immigrants and that has made America such a beautiful country,” Mansoor said.

The class was winding down. “All right, good job, guys,” he said. “Time for pizza.” 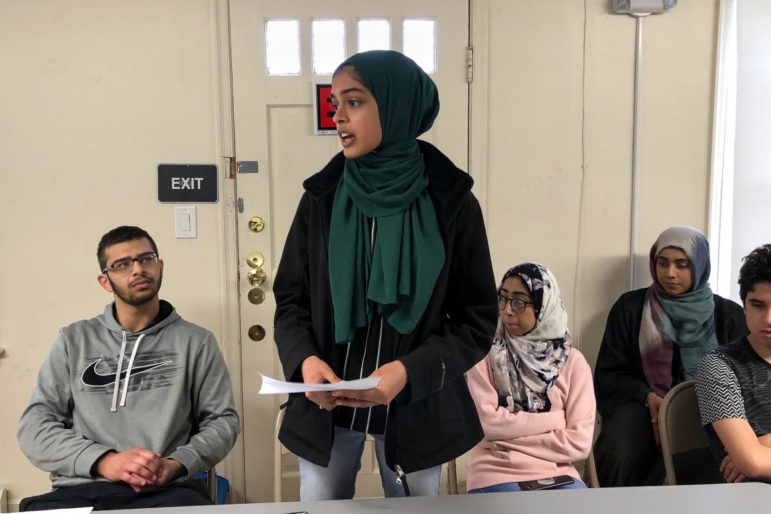 Nisaa Mohamed, 16, speaks up during a class debate on the topic, “America is the best place to my Islam.”

Outside, one of the security guards could be seen patrolling the property. Eleventh-grader Nisaa Mohamed, 16, said she feels safe at her mosque. But as a Connecticut high schooler who wears a headscarf, Mohamed said she’s had to deal with people calling her a terrorist.

“My friend and I, who also wears a scarf, we took our time to explain to them that our religion does not motivate or promote violence,” Mohamed said, “and that we’re a religion of peace.”

Like Mohamed, Ameen Parks is one of the only Muslims at his Connecticut high school. He tries to be a good ambassador for his faith, he said — just like he’s been taught in Sunday school. But when an incident involving Muslims happens out in the world, he hears the stereotypes and racist jokes.

“I try to clear things up,” Parks said. “But a lot of people you just can’t change. They’re really stubborn.”

So Parks, 17, tries to change minds by being himself.

“It’s best just to show people who you really are,” he said. “If they take it, they’ll take it. But if not — just try not to fuel the fire.”

People of all religions are welcomed to visit their mosque, Mansoor said. And if the students come away from class feeling empowered in their identity as Muslims — and as Americans — he sees that as a success.

Vanessa de la Torre is a reporter at Connecticut Public Radio and part of the public radio collaborative Sharing America, covering the intersection of race, identity and culture. This initiative, funded by the Corporation for Public Broadcasting, includes reporters in Hartford, St. Louis and Kansas City, Missouri, and Portland, Oregon.

One thought on “At Muslim Sunday school, learning about Islam — and correcting misconceptions”