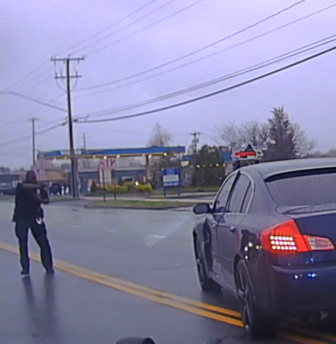 A screengrab from the first of three videos released by the chief state’s attorney on Friday, May 3, 2019 depicting the moments after a police officer in Wethersfield, Conn. shot an 18-year-old driver following a traffic stop.

The bill, which was approved in the House of Representatives on a 86-60 vote, requires dashboard camera recordings be made available to the public within 96 hours of an incident; establishes a task force to make policing more transparent and accountable; and charges the Police Officer Standards and Training Council with studying and reviewing officers’ use of firearms during their pursuits of suspects. It also requires law enforcement agencies to issue an annual use of force report to the state Office of Policy and Management.

“Information is power, and this transparency bill is a necessary first step toward placing power over police squarely where it belongs: with the people. No one should die or be harmed at the hands of police, and police should not be able to hide the number of times they hurt, kill, or threaten people,” American Civil Liberties Union of Connecticut Executive Director David McGuire said in a statement. “Transparency about police uses of force will not bring back people killed by police violence, but it is a critical tool for exposing police violence and enabling Connecticut to take democratic control over police.”

The Senate unanimously passed SB 380 last week after Sen. Gary A. Winfield, D-New Haven, obtained the blessing of police chiefs following quiet rounds of negotiations. The legislation forbids police from firing their weapons at motor vehicles unless there is an imminent threat to the life of an officer or bystander, a response to the recent shootings of two unarmed drivers in New Haven and Wethersfield.

“The ACLU of Connecticut will be watching closely to ensure this bill, should it be signed into law, is implemented correctly,” McGuire vowed. “This is an important step forward for police transparency, and we will continue to fight for comprehensive police accountability and an end to police violence and injustice.”

“Information is power, and this transparency bill is a necessary first step toward placing power over police squarely where it belongs: with the people.”

A litany of House Republicans voiced concerns about the bill for about two hours before their delegation unanimously voted against the measure. Democrats Ronald Napoli Jr. and John Hampton, of Waterbury and Simsbury, respectively, joined Republicans in voting against the bill.

Some lawmakers also took issue with the name of the bill, “An Act Concerning Mental Health Care and Wellness Training and Suicide Prevention for Police Officers.” On May 29, the Senate passed an amended version of the proposal that removed language prohibiting officials from disciplining officers for seeking mental health treatment, required police to undergo a mental health evaluation before they received their surrendered firearms, and allowed cops who voluntarily admit themselves for psychiatric treatment to have their official guns and ammunition returned to them when they are discharged.

“Mental health doesn’t get enough attention in this building and I don’t think anyone would argue with me on that, especially when it concerns our police officers,” said Rep. William Buckbee, R- New Milford. “And we have the audacity to strike that out and not even think about it. It’s arrogance. It’s frustrating to do this kind of thing.”

Another common Republican gripe about SB 380 was that lawmakers should not be dictating the actions of officers, who work stressful, dangerous jobs that are difficult for outsiders to comprehend.

“We are trying to legislate the details of a split-second decision made under stressful situations, something that we cannot even imagine,” said Rep. Stephanie Cummings, R- Waterbury. “I think that it is unfair and that it is restrictive on the police community when time and time again we tell them ‘you’re not doing it right, and we know better.’ ”

Rep. Steven Stafstrom, D-Bridgeport, rejected the idea that the bill was an extensive critique of police conduct.

“The reporting requirement could just as easily be of benefit to the police officer in that the facts and circumstances of the event can be out there publicly, without the need to wait a full year, or year and a half, for a formal report with witness details and the like being public,” Stafstrom said, adding that public disclosure can also “cut down some of the media or internet rumor.”

Reached by phone Wednesday night, McGuire said the bill is not anti-police and predicted it will lead to better police-community interactions. “It’s been my experience that many government reform efforts start with getting the data,” he said. “This is really the first step. This is a police transparency bill that will hopefully lead to meaningful police accountability in the state of Connecticut.”