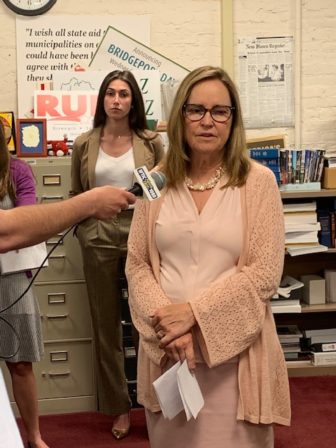 Secretary of the State Denise Merrill made an impromptu visit to the Capitol press room Wednesday afternoon to express her “deep disappointment” that a bill expanding voting access was stalled in the Senate.

With just hours remaining in the 2019 legislative session, Republicans and Democrats blamed one another for the death of a bill that would have expanded Connecticut residents’ voting access.

Secretary of the State Denise Merrill told reporters Wednesday that Republicans had effectively killed House Bill 7160 by threatening to filibuster and waste valuable time that could be spent passing other legislative priorities.

“I’m deeply disappointed because this has been on the calendar for at least a week, and I was assured that it would be called,” Merrill said. “And they suddenly just said they’ll filibuster until they close down the Senate if we call the bill.”

Noting that his colleagues had a multitude of concerns about the bill, Fasano said Republicans have a right to express their uneasiness on the proposed legislation. “And I’m not going to ask my caucus to condense those rights, because the majority party decides to pull this bill out, on Wednesday, after 1:00,” he said, warning that, “If this comes out, other bills will die.”

The legislation, which passed the House on May 28, would have restored voting rights to parolees and incarcerated persons held in community residences; expanded the number of sites that allow for Election Day Registration; allowed the use of electronic signatures to sign some election-related documents; and instituted an automatic voter registration system.

“These are important changes. And with the 2020 election coming up, these need to be addressed,” Merrill said. “We cannot have the situation where people are waiting in line for hours. This is tantamount to denying their right to vote.”

In an effort to make the legislation more palatable to Republicans, Merrill said Democrats previously excised a provision from the bill that would have allowed people standing in line before 8 p.m. on Election Day to cast a ballot, even if they weren’t yet registered. Republicans expressed trepidation on this subject last November, when they went to court over about 300 ballots they worried were improperly cast in New Haven and Mansfield.

“We removed that section because we had heard they objected to that as something that could possibly create a situation where someone could vote twice,” Merrill said. “Not that that has ever been uncovered anywhere. But it goes in line with all the arguments you hear nationally about the rampant voter fraud that quite frankly doesn’t really exist.”

Fasano said Republicans were wary of expanding the DMV’s ability to register people to vote and took issue with restoring parolees’ right to cast a ballot. “Our caucus has a firm belief that until you pay your debt to society, including the fines, that you shouldn’t be allowed to vote,” he said. 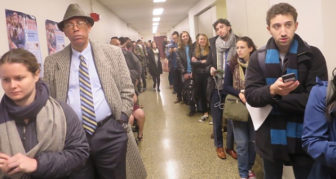 Lines at the New Haven polls in the 2018 election.

Merrill said she was taken aback by Republican opposition to the bill. “This should not be a partisan debate,” she said. “This is about allowing people more access to the ballot.”

The bill’s potential defeat is especially deflating in light of an increase in voter turnout last year, Merrill said.

“We had 300,000 new registered voters. We had unprecedented record turnout for midterm election,” she said. “And so that’s why I’m so intent on making sure that we maintain that spirit of participation, which I think we’re really getting to.”

Mae Flexer, co-chairwoman of the Government, Administration and Elections Committee, said “Republicans have made it clear they don’t like this bill.”

“It should be a bipartisan bill,” said Flexer, D-Killingly. “But unfortunately every time we have a conversation in this building about making it easier for people to participate in our democracy, the Senate Republicans time and time again say no. ”

Fasano castigated Democrats for waiting until late in the session to try and push the bill through the Senate, questioning how high HB 7160 had been on Democrats’ legislative agenda. “That’s management of the calendar. This happens every single year on a Wednesday,” he said. “Every single year, we go through the same dance.”

Jenna Carlesso and Kathleen Megan contributed to this story.