Lamont tells legislators to get ready for overtime 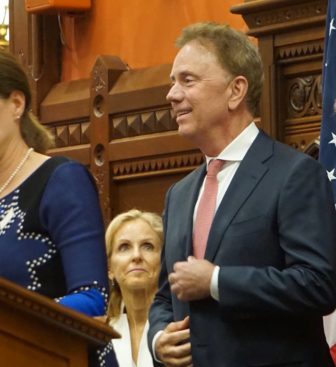 Gov. Ned Lamont marked the end of his first legislative session with a casual four-minute address to the General Assembly shortly after midnight Wednesday, inviting 187 lawmakers to join him for a drink in his office, and offering a wry reminder that they are coming back for special session.

“I hope it didn’t take too much of a toll on you,” Lamont said of the five-month session, glancing sideways as lawmakers laughed. “Which reminds me, we do have a little bit of unfinished business.”

Legislators adopted a resolution calling themselves back in special session only for the purpose of adopting a bond package — borrowing for school construction and other capital projects. Ignored for now is the issue dominating Lamont’s first months in office: the question of whether tolls will return to Connecticut’s highways.

The governor is able to issue his own call for a special session to address tolls, an all-consuming issue the governor set aside at his staff’s urging to focus on delivering a budget on time and with little drama, a departure for a state in a semi-permanent state of fiscal crisis since the Great Recession of 2008.

“I want to thank you for getting a balanced budget on time,” Lamont said. “This is so important.”

The session ended in the House on a discordant note. As the clock struck 12, the constitutional adjournment deadline, Republicans still were denouncing a Democratic offer of how to resolve the disputed election of Rep. Phillip Young, D-Stratford.

Young won by 13 votes, but more than 70 voters in one polling place were given incorrect ballots. Democrats offered a do-over at that single polling place on July 2, the Tuesday before the Fourth of July weekend. Republicans declined.

Lawmakers left the Capitol with their own uncertainty about when they would  return and how extensive an agenda they would face.Lamont was intent on sending them home satisfied with the job so far.

“Good night, good luck and I’ll see you in a couple of weeks,” he said.

With more than $2 billion in budget reserves, Lamont said the state is well-positioned to weather an economic downturn. “Fiscal stability is the key to economic growth and this is a budget that gets us in the right direction,” he said.

Lamont got off to an uncertain start in January.

He promised an open door and an open mind, initially welcome attributes. But legislators and lobbyists soon complained that the governor, a Democratic businessman elected with the backing of labor, lacked a political compass or a clear sense of direction.

In February, he abandoned a campaign position of favoring tolls only on trucks, proposing a comprehensive system of tolls for all vehicles on the Merritt Parkway and Interstates 84, 91 and 95 as a means to raise $800 million annually, stabilize the special transportation fund and allow Connecticut to be ambitious about modernizing its transportation infrastructure.

Now, facing a Democratic legislative leadership that views tolls as a threat to retaining control of the General Assembly, Lamont will have to decide how much political capital to invest in convincing Democrats of standing with him on his tolls plan — or if it’s smarter to revise and regroup.

Lamont said he was grateful that there is a consensus on two transportation issues: Connecticut’s transportation system is badly in need of upgrading if its economy is to grow, and the revenue from fuel taxes and fees that now finance transportation borrowing are insufficient.

By luck, skill or a bit of both, Lamont closed the session with a series of victories delivered by the Democratic majorities.

He already has signed a bill raising the $10.10 minimum wage to $11 this fall and in one-dollar annual raises to $15 in 2023. The legislature responded to his veto threat on a paid family and medical leave bill, meeting his demands to place the new program under the control of a quasi-public authority.

Lamont will review his first session and his plans for the next with reporters later today. 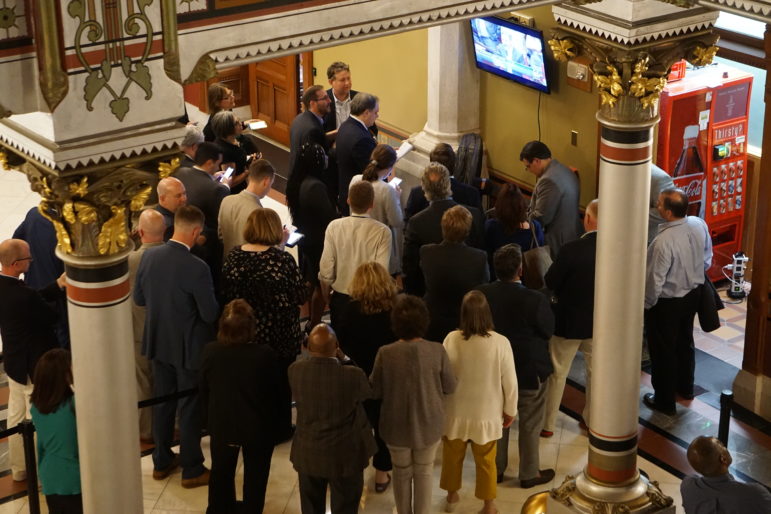 Lobbyist crowd around a TV monitor listening to the bills being added to the Senate consent calendar on the last night.