Officials gather in Hartford to address outbreak of opioid deaths 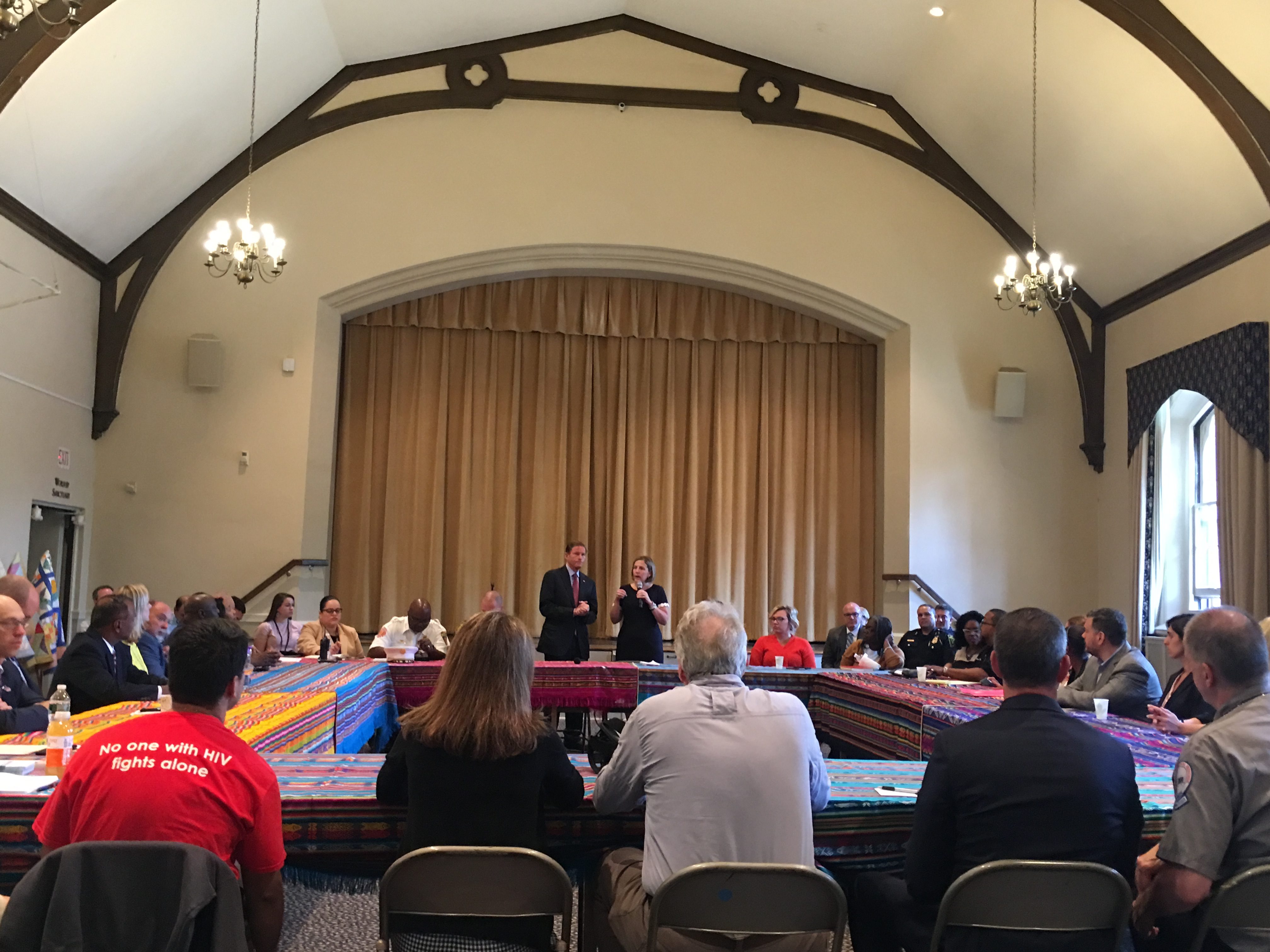 Monday, those alarmed officials gathered at the behest of Sen. Richard Blumenthal at the Asylum Hill Congregational Church to discuss measures to effectively address the crisis.

“We are seeing a rapid evolution of this threat,” Hartford Mayor Luke Bronin said as he addressed a room full of people who have, one way or another, been touched by the crisis. “What we have seen in the last two weeks is a whole new type of problem.”

The opioid epidemic that has besieged Hartford — claiming 10 lives in the last week — coincides with key legislation that was passed just under the wire during the legislative session.  One bill would regulate the prescribing of opioids by pharmacists and its administration by doctors, requiring them to oversee treatment if they prescribe more than a 12-week dose.

“We need to see a vast expansion of mediation treatment systems, vastly larger capacity than we have and I think that’s only going to happen if we see federal resources go into this in a dramatic way,” Bronin said.

Although Connecticut saw a drop in accidental drug overdoses in 2018, according to the state medical examiner’s office, deaths from fentanyl were up 12 percent from 2017 and four times higher than in 2015.

The threat from fentanyl – a synthetic opioid that can be deadly in in a quantity as small as a few grains of salt — explains part, but not all, of the Hartford outbreak, officials said Monday.

Hartford Police Department Sgt. Jeffrey Morrison, who investigates overdoses as part of the Major Crimes Division, said the city is averaging six to seven overdoses a month in 2019 — for a total of 45 deaths so far this year, dwarfing the 24 deaths recorded at the same time last year.

“The reason we are here today is that for June we already have 10 deaths– and it’s only June 10th,” Morrison said, adding that three of those deaths are suspected of being caused by crack cocaine laced with fentanyl.

Mark Jenkins, Executive Director of the Greater Hartford Harm Reduction Coalition, said the recent deaths are “a game changer” and completely different than anything his organization has encountered before.

“I pray that it was a fluke because we don’t have the resources and we still don’t have our feet under us,” Jenkins said. “Everything we have done has been reactionary.”

Jenkins said the federal government should be supporting grassroots initiatives that are on the front lines of the epidemic and deploy “non-traditional” solutions such as safe needle and naloxone aftercare packages.

Congress has more than doubled the amount of money the federal government sends to the states to combat opioid addiction.

A recent analysis by the Bipartisan Policy Center identified 57 federal grant programs across five departments and multiple agencies, including the White House Office of National Drug Control Policy that, either entirely or substantially, support programs that seek to end the opioid epidemic.

According to the center, Connecticut received about $35.3 million in these grants in 2017 and $67.3 million in federal grant money to combat opioid addiction in 2018. That’s about $18.77 per capita, the center said.

Congress also approved the Opioid Crisis Response Act last year, legislation that President Donald Trump signed into law. Besides facilitating cooperation between the federal Food and Drug Administration and Customs and Border Protection, the bill requires the Postal Service to do more to detect shipment of synthetic compounds like fentanyl, which often come from overseas labs.

The new law boosts research on non-opioid pain treatments and make it easier for Medicare recipients to get substance-abuse therapy through telemedicine services, and direct the Department of Health and Human Services to undertake a pilot program of Medicare coverage for opioid addiction treatment.

The legislation would also lift a cap on the number of patients –from 100 to 275 — to whom a qualified doctor can prescribe drugs like buprenorphine, a drug proven effective at limiting opioid cravings and easing withdrawal.