A song, and a bill signing, for Ethan 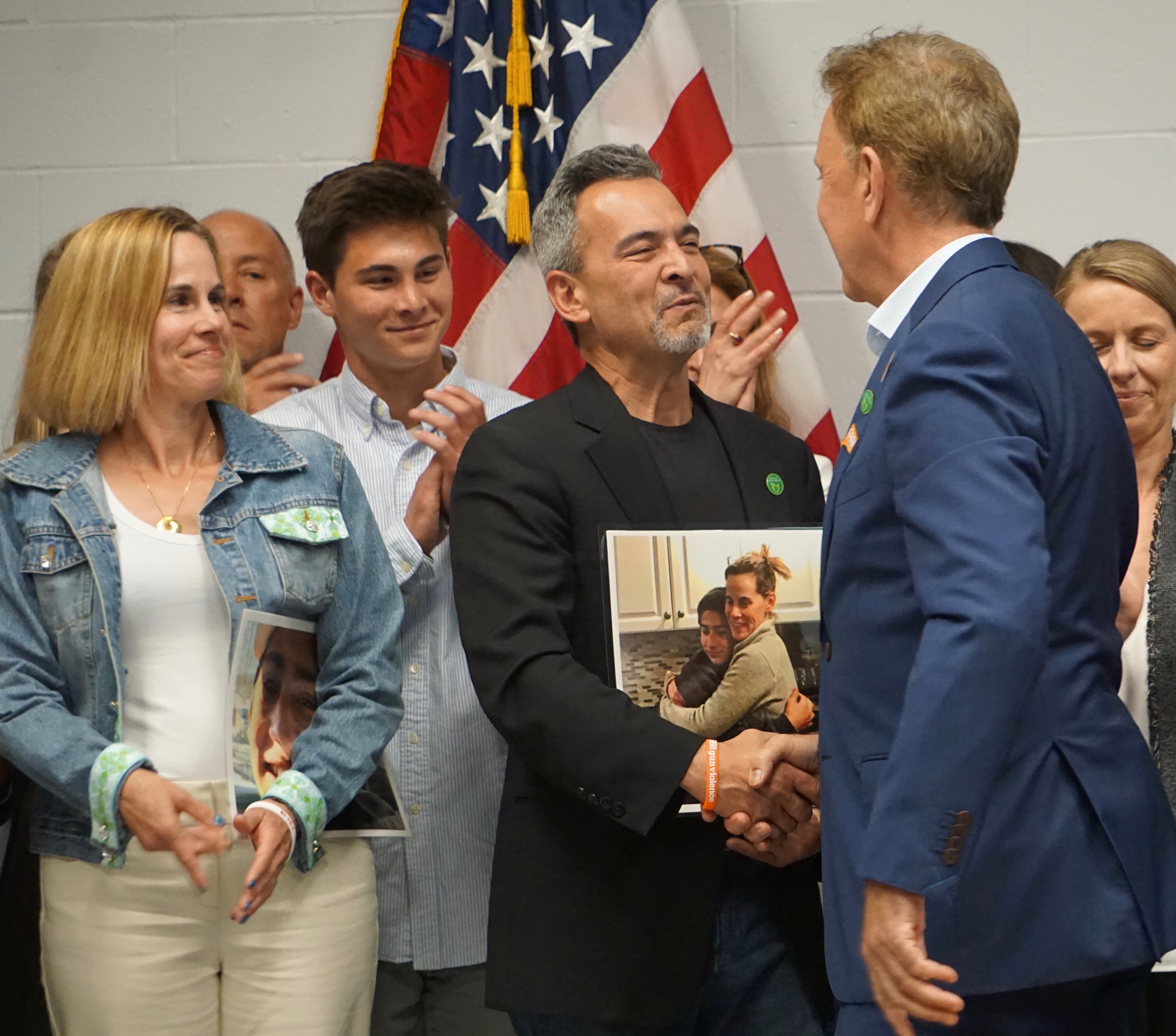 Guilford — A sweet teenaged voice sang “Rise Up,” the bluesy Andra Day song about overcoming despondency, about rising up, again and again, in spite of an ache that never leaves.  Holding a photo of her dead son, Kristin Song told the governor, legislators, friends and  reporters she sings it 100 times a day.

Her husband, Michael, held his own photo, one of Kristin enveloping Ethan in a hug. Gone at 15, he was their youngest. The Songs and their two other children, Emily and Evan, had held hands while a local high school junior, Julia Toussaint, sang, “High like the waves/We’ll rise up/In spite of the ache/We’ll rise up/And we’ll do it a thousands times again/For you/For you/For you/For you.”

They gathered Thursday for an unconventional ceremonial bill signing, marking the passage of the law they successfully sought in memory of their son, killed in a gun accident.

More fierce than mournful, Kristin said the song powers her through the day. 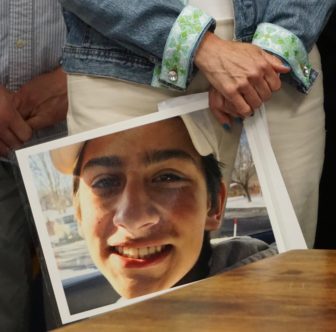 On Thursday, it got her through the small ceremony in the community room of a firehouse, just off I-95, crowded with friends and the gun-control advocates now an intimate part of their lives.

Gov. Ned Lamont and Lt. Gov. Susan Bysiewicz came to conduct the ceremonial signing of “Ethan’s Law,” a modest gun-safety measure. It requires firearms to be secured in the home, whether loaded or unloaded.

Mark Barden stood with the Song family. He lost a son at Sandy Hook, not quite two weeks before the Christmas of 2012. The Songs lost their boy on their own street, up in a neighbor’s bedroom, 31 days into the New Year of 2018. Ethan was killed handling a .357 Magnum handgun at a friend’s house.

The .357 Magnum was one of three owned by the friend’s father, a private investigator. The firearms were stored in a cardboard box inside a Tupperware container. The guns had trigger locks, but the keys were in the same box. So was the ammunition.

Rep. Sean Scanlon, D-Guilford, told the audience that the Songs had taken grief and turned it into something good, loss into a gain for Connecticut. “Because of their courage,” he said, “Connecticut will be a safer state from today going forward.”

Connecticut already has a gun-storage law. Gun owners have a legal duty to securely store a firearm when the weapon is loaded and there is a reasonable chance that a minor under age 16 is likely to gain access to it without his or her parent’s permission. In addition to expanding the law to cover unloaded weapons, the new law raises the age of children covered by it to anyone under 18.

Scanlon crafted the bill with a Republican, Rep. Vincent Candelora of North Branford. Candelora, whose district includes a piece of Guilford. Candelora had never voted for a gun-control bill, but they worked together on what became “Ethan’s Law.”

“You don’t see that on TV anymore,” Scanlon said.

“We all agreed to put down our party labels when Rep. Scanlon called me,” Candelora said.

The legislature also passed two other gun bills already signed by Lamont: One prohibits storage of a handgun in an unattended motor vehicle if the firearm is not in the trunk, a locked safe, or a locked glove box. The other regulates 3D-printed firearms and bans so-called “ghost guns” that can be assembled from untraceable parts, unless the owner obtains and engraves the weapon with a serial number.

Ethan’s Law passed 127-16 in the House and 34-2 in the Senate, lopsided margins celebrated by Jeremy Stein, the executive director of Connecticut Against Gun Violence.

“This has never been done on a gun bill in the history of Connecticut,” Stein said. He added, “The tide is changing.”

Lamont was not quite so grand in his assessment, staying away from the politics of gun control, or whether bipartisan support for a safe-storage law is really a breakthrough. Instead he simply observed the measure could save lives.

He addressed himself to the Songs and to this shoreline town where they still live, despite moving after Ethan’s death. 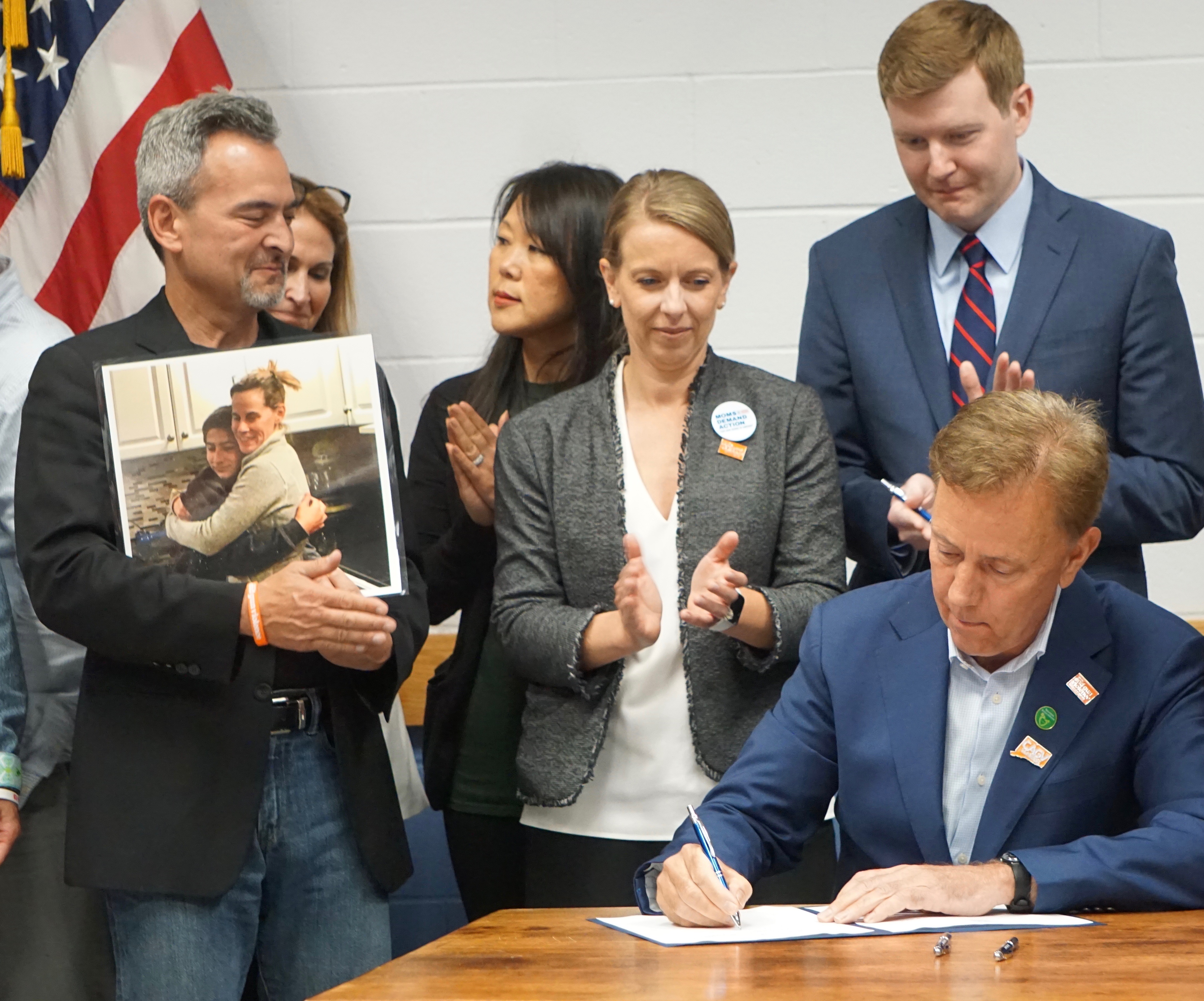