The state’s community colleges will have to cut their budgets by a collective $12.5 million next year under a $1.29 billion budget endorsed Thursday by the Board of Regent’s finance committee. 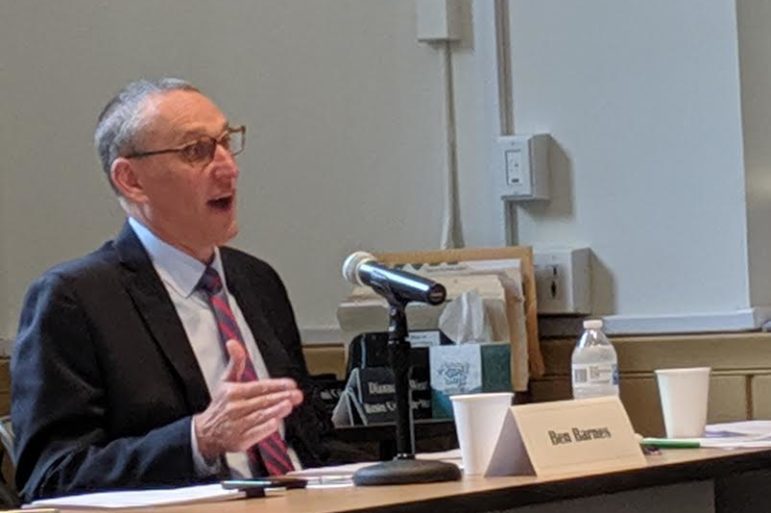 Ben Barnes, chief financial officer for the CSCU system, presented the budget for Fiscal Year 2020 at Thursday’s meeting of the Board of Regents’ finance committee.

Rather than deplete the community college reserves of $36.9 million, the committee voted to limit the use of reserves to $8 million,  leaving the colleges with the challenge of cutting the balance of the deficit from their budgets.

Ben Barnes, chief financial officer for the regents, said the cuts to colleges could have been worse.

“Frankly, it would be reasonable to make them operate without any deficit. But we’re allowing some level of deficit in order to minimize  the impact on student outcome and minimize the impact on students,” Barnes said. He added, “I hope it’s the sweet spot where we are able to reduce the spending without harming students too much, but we will have to see as we go through the year.”

If the colleges covered the entire $19.6 million deficit with reserves, Barnes said, more than half the reserve fund would be gone.

“That is not sustainable for more than one year,” he said. “If we were to draw down that two years running, you would be insolvent and have burned through all the reserves in the system.”

By contrast, he told the committee, the four state universities are in much better shape with a reserve that is $142.6 million, with adequate funds to cover the $7.5 million deficit. But he said he expects they may reduce their deficit as the year goes along.

The $1.29 billion budget is 4 percent higher than last year’s budget and includes an increase of $11.5 million in state funding, mainly boosting the state’s subsidy for fringe benefits for community colleges.

Barnes provided numbers showing that if the community colleges limit the spending on reserves to $8 million and make the $12.5 million cutback in spending and receive expected additional state money for fringe benefits, the reserve fund will bounce back to more than $30 million in the 2024 fiscal year.

Mark Ojakian, president of the Connecticut State Colleges and Universities system, said the budget is “challenging” and attempts to “minimize the amount of reserves we tap into to balance the budget.”” 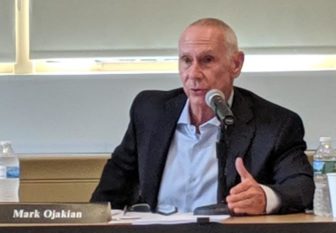 Mark Ojakian, president of the CSCU, makes a point during the Board of Regents Finance Committee meeting Thursday.

The full board of regents will vote on the budget at its next meeting on June 20.

Barnes presented an email from the non-partisan legislative Office of Fiscal Analysis which was asked to review the regents’ savings projections  — numbers that have been doubted by some critics of the plan. The regents have said that the merger will save about $23 million annually starting in the fall of 2023.

OFA’s Janelle Stevens, wrote in an email dated April 29, that OFA finds that “generally the Students First cost and savings are supported by position-level back-up and/or calculations supplied by CSCU.”

She said that OFA “replicated or otherwise verified the calculations.”

She did acknowledge, as she said CSCU does too, that there may be slight variations in the costs and savings. She said the elimination of personnel may result in higher savings while the the addition of new positions may cost slightly more than anticipated.

“This is important,” Ojakian said, “because throughout the legislative session and throughout the calendar year, there have been many … who have indicated that we made up the numbers, they were not valid, we could not achieve the savings.”

Ojakian said, “Now we have independent verification by a legislative, non-partisan office that our savings targets are real and can be confirmed.”