As food insecurity bill slips in under radar, advocates hope for further action 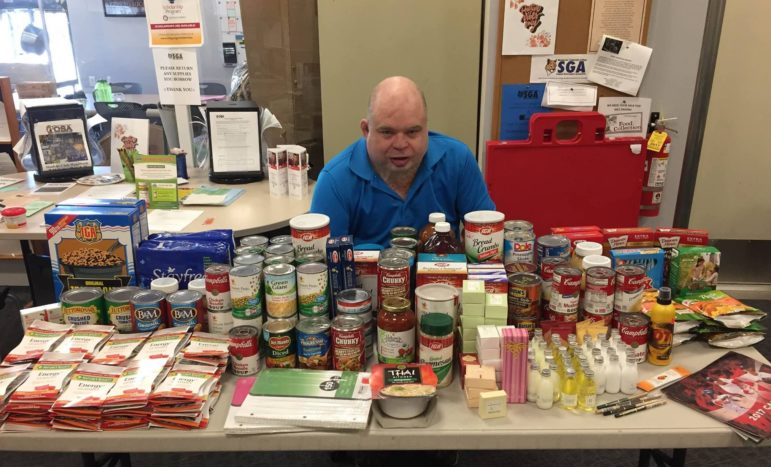 A growing number of colleges and universities are starting and operating food pantries, as more and more students grapple with food insecurity. Gordon Plouffe, with the CT Food Justice Project, has been managing the Cougar Pantry at Manchester Community College since 2016.

Though debt-free college took the lion’s share of headlines this legislative session, another bill with little financial impact but huge consequences for a growing number of college students facing hunger cleared both the state House and Senate without fanfare or fuss.

On the last day of the session, on the heels of midnight, Sen. Will Haskell, D-Westport, spoke about what he called a “growing epidemic” among his college-aged peers: food insecurity—or the inability to have “access to a sufficient quantity of affordable, nutritious food.”

The bill mandates the collection of data on food insecurity from the state’s public colleges and universities.

Haskell, who at 23 years-old is one of the youngest members of the General Assembly, said the issue had been a recurring theme in his meetings with administrators and students as part of the Higher Education and Employment Advancement Committee. He classified the matter as urgent and in need of further research—35 of his fellow senators agreed.

“There are students out there who are too rich for Pell Grants and too poor to afford college,” Haskell said. “There are students who are falling through the cracks and as much as we’d like to believe that we have a strong safety net in place, young people are being overlooked… and going to class hungry.”

According to Marlene Schwartz, director of the Rudd Center for Food Policy & Obesity, safety nets such as the Supplemental Nutrition Assistance Program (SNAP) often fail because the majority of full-time college students are not eligible for benefits unless they fulfill the 20-hour a week work requirement.

“There’s also an assumption that all college students have families that can give them the money they need. But that is not the reality today —especially in light of work to make college accessible to students from different backgrounds,” Schwartz said.

Specifically, the legislation requires the University of Connecticut and the Connecticut State Colleges and Universities to each study the policies affecting students experiencing food insecurity and collect data from their respective universities and colleges.

The term food insecurity has become commonplace in the lexicon of Connecticut’s colleges and universities with food pantries popping up at the University of Connecticut and larger scale ones, like the Cougar Pantry at Manchester Community College, expanding in size since its inception in 2015.

Nationally, at least 40 percent of college students experience food insecurity before graduating, according to a 2018 study released by The Hope Center for College, Community, and Justice, which surveyed over 160,000 students at 120 colleges and universities across the United States.

A study released by the U.S. Government Accountability Office late last year revealed an issue the bill attempts to address: information about the prevalence of food insecurity among college students is limited, both nationally and locally.

The GAO review of 31 national studies provided some insight despite limitations:  25 estimated that food insecurity affects between 9 percent to well over 50 percent of college students. Nearly two dozen of those studies estimated food insecurity rates of more than 30 percent.

This year, during the month of October, CSCU’s four state universities, 12 community colleges and all of UConn’s campuses will be required to record the number of students who reported experiencing food insecurity or attempted to access benefits offered by each institution. Additionally, each school must report the dispersal of any emergency aid or grants.

The bill’s House champion, Rep. Gregg Haddad, D-Mansfield, said the decision to limit the collection of data to one month was reached as a compromise to accommodate the smaller schools that may not have the infrastructure in place to roll out large scale data collection without interrupting services that already exist to help food insecure students.

In addition, the schools must report whether they currently operate a food pantry and disclose the number of students served and the number of pounds of food they distributed during that one month period.

Haddad, who also chairs the Higher Education and Employment Advancement Committee, classified the bill as exploratory and said its goal is not to establish a comprehensive database.

“We’re looking for [the colleges and universities in the study] to paint a picture of what is occurring on college campuses now,” Haddad said.  “We will use that information to have further conversations with the same institutions to determine if there’s something more we could do through the state.”

Food insecurity had been recognized long before it reached the House floor, and advocates hope now that it has received legislative backing this session, through a bill that would study its scope, it can further be dragged from the shadows.

Haddad said he attributed the successful passage of the bill to the persistence of the bill’s sponsors and cosponsors, but also to “the advocacy of students who helped increase awareness and helped to move a number of legislators to feel comfortable with authorizing and requiring additional research.”

One such student was UConn senior Wanjiku Gatheru, who spearheaded a grassroots initiative to address food insecurity on the university’s Storrs campus through a series of “pop-up” food pantries which served over 600 students over the course of two events. Currently, UConn does not operate a food pantry on campus, but Gatheru said she hopes the study will lead to the funding of a permanent one.

Gordon Plouffe, a member of the CT Food Justice Project, who is at the helm of Manchester Community College’s Cougar Pantry, said on average they serve 6,000 students and go through about 50,000 pounds of food a semester.

At least eight of the 12 community colleges that will take part in the study this October currently have food pantries on campus to serve its food insecure students, two other community colleges are stops on a mobile pantry bus route and both Central Connecticut State University and Eastern have on-site pantries.

Maureen Chalmers, president of the Congress of Connecticut Community Colleges (4Cs), said within the last five years, community college faculty and staff have ramped up efforts to support students struggling to have their basic needs met— according to both Schwartz and Haskell, community college students are disproportionally food insecure.

“When students are hungry or worrying about other essentials like where they will sleep that night, they cannot focus on academics,” Chalmers said. “Students should not be forced to choose between an education that could serve as a pathway out of poverty or paying for food and housing.”

Haskell said it’s a “piecemeal approach” to a problem that needs to be addressed at the root cause.

“I’m concerned and I think many other committee members are concerned that without a comprehensive solution, what we’re doing is putting a Band-Aid on the larger wound,” Haskell said. “We need to look at why they are food insecure, to begin with, and explore ways can we help them be on a more steady financial footing to make sure that they don’t have to visit the food pantry in the first place.”