Saving children from cycle of trauma

Shawn was 4 years old when he watched his dad, Jonathan Whaley, keel over at their doorstep from a gunshot wound to his back. He remembers the pool of blood, the paramedics, and the police. Whaley, 34, didn’t make it.

Shawn is now 8 years old. He lives with his grandmother and five siblings in one of Hartford’s rundown neighborhoods. “They got a lot of anger,” said Ishmeal Turner, Shawn’s grandfather. “It’s been rough. Rough.”

Turner, a cab driver, lives a few streets down and comes by to help. Shawn’s mother had moved out before Whaley’s death, and his grandmother is on chemotherapy for colon cancer. Turner said he pulled Shawn out of public school for aggression. He still worries over the child’s outbursts of anger, and nightmares involving gunshots and blood.

Like Shawn, thousands of children suffer from trauma, or what experts call traumatic dysregulation. When children are overwhelmed by a traumatic event, their ability to think in a linear fashion is compromised, and their coping mechanism goes haywire. The National Child Traumatic Stress Network estimates that 26 percent of children will experience a traumatic event by age 4.

But they are getting little or no help. “Imagine if you feel small or frightened all the time, imagine if you can’t get rid of intrusive thoughts about the original traumatic experience,” said Steven Marans, PhD, director of the Childhood Violent Trauma Center at the Yale Child Study Center, and professor of psychiatry at the Yale School of Medicine. “These are burdens that the developing child is not able to adequately negotiate and master.”

When left untreated, children are at a higher risk of post-traumatic stress disorder (PTSD), anti-social behavior, academic failure, difficulty forming relationships, and anxiety disorders. They are also more likely to abuse drugs and alcohol. There are physical disruptions too because “our bodies are central to our feelings,” Marans said. Symptoms can include increases in the heart rate, changes in the respiratory rate, headaches, and gastro-intestinal disorders. 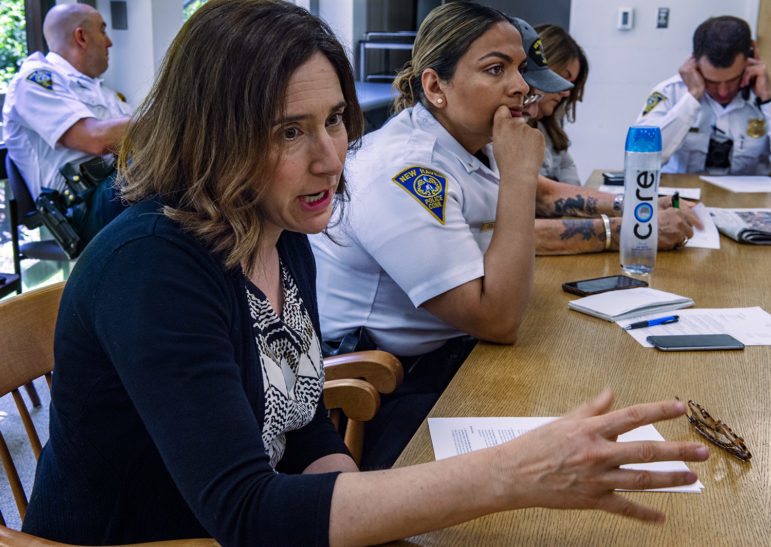 The long-term repercussions can be devastating. Doctors say they are frustrated by the cyclical nature of how adults exposed to trauma in their childhood end up in the ER repeatedly. Nothing has changed, they say, in the last 15 years. “They are showing up because they are using substances, for erratic behavior in the community, or are a threat to themselves,” said Dr. Gregory Shangold, an ER physician and vice president of the Connecticut State Medical Society.

Most, Shangold said, are from inner cities and the ER is their last resort. When they go back to their communities, they lack access to therapy and are at a higher risk of returning to the ER.

The late 1980s were particularly violent across the United States. The average penetrating wound per individual with a gunshot wound was 3.5 bullets per person, Dr. Jonathan Gates, chief of surgery at Hartford Hospital, pointed out. The volume of aggravated assaults appears to be on the rise again, Gates despaired. “Young victims pour into the trauma centers night after night, some with life-threatening wounds. Those who are saved are faced with long term post-traumatic stress from the event,” he said. Hartford Hospital admits over 2,000 trauma patients per year of which 10-15% are victims of penetrating wounds.

The need, then, is to intervene swiftly in the aftermath of a traumatic event. “The police can be the first adults for the children to provide an immediate sense of safety,” Marans said.

Under Marans’ guidance, the New Haven Police Department will become among the first in the country to train all of its officers in trauma-informed responses to children exposed to violence. The initiative builds upon an already existing partnership with the Yale Child Study Center through which mental health professionals respond to police calls involving child victims or witnesses of violence. The professionals offer an immediate buffer and assess initial symptoms—anxiety, discomfort, irritability, difficulty sleeping, easy startling, and more— identifying a child in need of treatment. The children are then referred for trauma-focused counseling at Yale.

Marans says the model is working and police departments have replicated it nationwide. “This is a great example of intervening early to help children and their families turn down the volume on symptoms,” he said.

Yale has several other treatment methods. In a June 2019 paper published in the journal Child Abuse & Neglect, Marans and his co-authors found that 640 caregivers nationally saw a 62 percent improvement in post-traumatic stress under the child and family traumatic stress intervention (CFTSI) model. Adult well-being has a cascading effect on how traumatized children recover.

But the need is so vast that nonprofits are filling the gap. Ellen Tracy, executive director of Big Brothers Big Sisters of Southwestern Connecticut, said a child once had a man drive up to her at her bus stop and he tried to get her into his car. The girl ran away but was afraid to take the bus again. “They see all levels of street violence—drugs, gang violence, domestic violence. They are very used to it and it becomes part of their life,” she said.

The findings highlight the link between children’s health and neighborhood safety, and the need for public-private investments in underserved communities.

Data from the Child Health and Development Institute of Connecticut, Inc. show that in the next five years across Connecticut, 13,000 additional children will receive an evidence-based trauma treatment. Of these, 2,000 will be under the age of 7. More than 700 early childhood providers will be trained in trauma through the Early Childhood Trauma Collaborative.

For now, though, kids like Shawn need immediate help. Though he has a counselor, Shawn’s grandfather is uncertain if he is receiving trauma-focused intervention, which is what he needs, Marans said.

Shawn remembers playing basketball with his dad. He misses his dad’s grilled chicken. How does he cope? The child shrugged, looking at the floor. “Dunno,” he whispered.

Families across Connecticut can search for providers offering selected evidence-based trauma treatments by visiting www.kidsmentalhealthinfo.com and clicking on “find a provider,” or by going directly to the zip code searchable directory at https://ebp.dcf.ct.gov/ebpsearch/. The database includes links to a number of providers. Since 2007, 13,000 children in Connecticut have received an evidence-based trauma treatment, however gaps in accessing care remain, especially for very young children. Recent efforts such the Early Child Trauma Collaborative have focused on expanding treatments and supports for children under age 7 and their families.

This story first appeared June 12, 2019, on the website of CTHIT.ORG, the Connecticut Health Investigative Team.