Pentagon to take a ‘hard look’ at Raytheon, UTC tie up 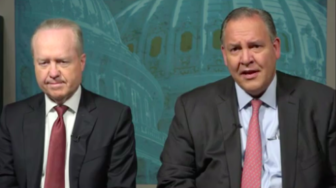 UTC’s CEO, Greg Hayes, right, and Raytehon’s Tom Kinnedy On Fox Business. Hayes said, “This is not about Connecticut being a bad place to invest or a bad place to be.”

Washington – The Pentagon is reviewing Raytheon Co’s planned merger with United Technologies, but  scrutiny of the proposed deal by the federal government will not end there.

Charles Tiefer, professor at the Baltimore School of Law who specializes in government contracts, said the Justice Department will ultimately decide whether to challenge the proposed UTC-Raytheon merger,  but will consider the advice they receive from the Pentagon. The Federal Trade Commission may also want to take a look at the deal.

The merger, a stock swap, would create a company with combined sales of about $70 billion and a new industry giant that would rank second behind Lockheed Martin in the defense and aerospace market.

Tiefer said the tie-up “would make a second giant” in the defense and aerospace industry, moving Raytheon from three to two in the ranking of the nation’s largest defense contractors.

He said the Trump administration “is, in general, a pro-contractor administration.” But the president has questioned the company’s impact on competition in the defense industry – and on the ability of the Pentagon to negotiate good deals for weaponry. About half of the merged company’s sales will be to the Defense Department.

“The Defense Department and federal agencies will give the merger a hard look,” Tiefer predicted.

Last Monday, soon after Raytheon and UTC announced their impending marriage, the Defense Department’s Office of Acquisition and Sustainment began its review of the merger.

That office is headed by Ellen Lord, who was previously the CEO of Textron Systems, a global aerospace, defense, security, and advanced technologies industrial conglomerate.

“Under Secretary Ellen Lord is engaging with industry leadership to understand the implications and governance as a result of this acquisition,” Lt. Col. Mike Andrews, Defense Department spokesman, said.

Andrews also said the Pentagon is working “to provide the best capabilities our warfighters deserve, at the greatest value to the taxpayer.”

UTC Chairman Gregory Hayes and Raytheon Chairman Tom Kennedy stressed that each of their companies had “complimentary technology,” with little duplication in research or production.

Raytheon’s strength is in its cyber capabilities, while UTC is focused on aircraft expertise, they said.

But that doesn’t quiet the merger’s critics, Tiefer said.

“The merger companies will argue they don’t overlap enough and critics will argue that Raytheon will go from No. 3 to No. 2,” he said.

The headquarters of the new merged company, called Raytheon Technologies, would be in the greater Boston area, where Raytheon, a much larger company than UTC, now has a headquarters that employs more than 400 people.

UTC, the parent company of Pratt & Whitney, is now headquartered in Farmington. The tie-up would leave Pratt & Whitney’s operations largely intact, and may result in more hires there.

The proposed merger would follow a decades-old trend toward consolidation in the defense industry that shows no sign of abatement.

Some members of Congress have already signaled concern about the proposed merger.

Democratic Rep. Ro Khanna of California, where rival Boeing has about 13,000 employees, and a member of the House Armed Services Committee, said he will seek a congressional hearing on the merger and its impact.

Khanna also said he is collecting signatures on a letter to the Justice Department and the Federal Trade Commission, “stating strong opposition to the impending merger.

“This pending deal will likely raise prices, harm workers, stifle competition, and undermine innovation,” Khanna said. “We cannot have the taxpayers and our soldiers bear the cost for the profits of defense contractors.”

Meanwhile, Sen. Chuck Grassley, R-Iowa, the head of the Senate Finance Committee, met last week with UTC’s Hayes to discuss the senator’s concerns about the merger.

Collins Aerospace, which was a division of Rockwell Collins and is now part of UTC’s portfolio, is headquartered in Iowa. Grassley said he wanted to make sure the merger did not affect employment in Iowa’s small towns that are home to Collins Aerospace workers.

While Boeing and Lockheed Martin will be the biggest competitors of the new merged company, smaller defense contractors and suppliers may have “more legitimate” complaints about consolidation in the industry.

Sen. Richard Blumenthal, D-Conn., a member of the Senate Armed Services Committee, has not called for a hearing on the proposed Raytheon-UTC merger, but said he supports congressional oversight of the increasing consolidation of the defense industry and proposals to support opportunities for small defense contractors.

“I am simultaneously concerned about the increasingly corporate culture at the Department of Defense and the growing consolidation of the defense industry,” Blumenthal said. “Both trends could have adverse impacts on innovation, competition, and costs, while increasing the potential for private companies to unduly influence national security decisions.”