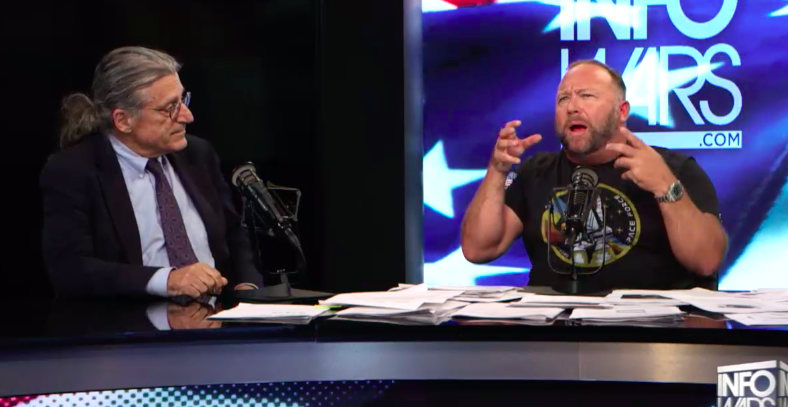 Bridgeport — It’s war. Alex Jones said so from his Infowars studio in Austin as his Connecticut attorney, Norm Pattis, sat beside him, mouth agape at times. They are coming for him, U.S. Sens. Richard Blumenthal and Chris Murphy leading the charge, trying to get him off the air. A Barack Obama appointee is their “errand boy,” using the Sandy Hook victims.

That was the story Jones told in a profanity-laced tirade broadcast Friday on radio stations and over the web, when he accused Chris Mattei, one of lawyers suing him for defamation on behalf of Sandy Hook families, of trying to frame him with child pornography. That was the story Pattis tried to defend Tuesday in a courtroom here, with limited success.

Superior Court Judge Barbara Bellis called it “indefensible” and “possibly criminal.” But she declined to punish Jones by declaring him in default, which would have stripped him of the right to a trial. Instead, she barred him from pursuing a motion to dismiss the case and ordered him to pay any attorneys’ fees associated with the imbroglio.

The case is tentatively scheduled for trial in November 2020.

And so went the latest chapter of a lawsuit that is a mashup of politics, law, conspiracy theories, and pop culture, all connected to a tragedy that still rubs raw in Connecticut — the mass shootings of 20 first-grade students and six educators at Sandy Hook School in Newtown in December 2012.

But, in his view, the lawsuit is.

As he said on his show, Jones blames “the Democratic party operatives that handle and manage all of those poor families and use their grief to inflict wounds on Connecticut every day.”

The suit was filed by Koskoff Koskoff & Bieder of Bridgeport, the same firm representing Sandy Hook families in a lawsuit against the manufacturer of the AR-15 used to kill their relatives. The suit accuses Jones of knowingly and recklessly promoting what he knew to be false: that Sandy Hook was staged.

“I live not far from Sandy Hook,” Pattis said on Jones’ show Saturday, when Pattis prodded him to walk back his accusation. “So from my perspective, there’s never been any doubt that it happened. A friend of mine lost his stepdaughter. And the suggestion that it didn’t happen to me is outrageous. But I don’t believe it’s outrageous to defend a person’s right to say that.”

On Saturday, Jones recanted, at least in part: “Now, I’m not saying that the lawyers for the Sandy Hook families set this up or did this.”

No one accused Jones of engaging in child pornography. The material was in attachments sent to Jones, some or all hidden in malware. Koskoff’s consultant and the FBI said it did not appear that any of the images were opened by anyone at Infowars. Koskoff had notified the FBI because possessing child pornography is a crime.

Pattis all but shrugged Tuesday, reminding the judge, “Mr. Jones is a conspiracy theorist. He thinks there are people out to get him. And guess what, there are.”

But Pattis made clear he doesn’t believe Koskoff did anything wrong, not does he think his client meant to harass or threaten Mattei.

“How would you characterize it?” Bellis asked.

“As an ugly outburst. As an angry outburst,” Pattis replied.

Pattis urged the judge not to take the radical step of declaring Jones in default, which essentially would be an order finding him liable damages for defamation.

If Mattei believes he was threatened, he should seek criminal charges; if he thinks he was defamed, he can pursue that claim in civil court, Pattis said. But the lawyer also questioned if Mattei was a public figure, who would have to prove actual malice in a defamation case. Mattei was a Democratic candidate for attorney general last year, losing a primary.

Pattis stood directly behind Mattei as he spoke. The courtroom was tiny. The plaintiffs’ lawyers sat a table in front, the defense directly behind them. Mattei sat with his hands folded, staring at the table as Pattis spoke. Jones had wrongly referred to Mattei as an Obama-appointed U.S. attorney. Mattei was a staff lawyer in the U.S. attorney’s office, not a presidential appointee. And he started there in 2007, when George W. Bush was president.

One of his co-counsels is Matt Blumenthal, a Democratic state representative and the son of Richard Blumenthal, the U.S. senator whom Jones describes as somehow directing a litigation conspiracy against him.

“He created this controversy,” Bloss said. “This was planned, your honor.”

Bloss said Jones may have stepped back from the accusation, but he offered not one grain of contrition. He reminded Bellis that Jones had once promoted a conspiracy theory that Democratic pedophiles were imprisoning children at a pizza shop in Washington D.C. called Comet Ping Pong.

A man with an AR-15 fired shots in the store, saying he was there to rescue the children. Jones later apologized to the owner, James Alefantis:

“I want our viewers and listeners to know that we regret any negative impact our commentaries may have had on Mr. Alefantis, Comet Ping Pong, or its employees. We apologize to the extent our commentaries could be construed as negative statements about Mr. Alefantis or Comet Ping Pong, and we hope that anyone else involved in commenting on Pizzagate will do the same thing.”

On Tuesday, Bloss said, a uniformed police officer was stationed at the law firm’s office.