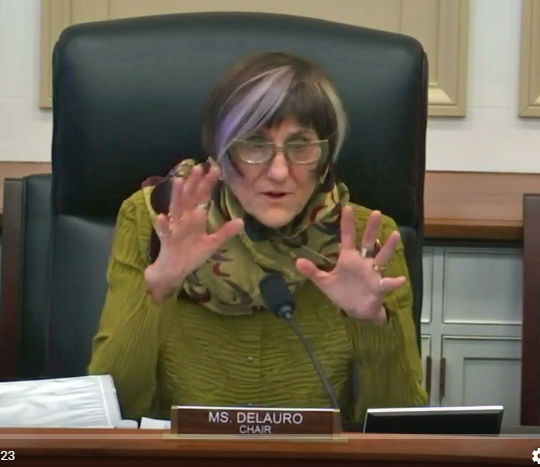 Washington – While Congress prepares to increase the defense budget for next year, U.S. Rep. Rosa DeLauro is intent on making sure the federal budget is fair to both “guns and butter.”

The U.S. House on Wednesday is expected to approve one of DeLauro’s most significant accomplishments in a long congressional career – a $190 billion appropriations bill that sharply increases spending on federal health, education and safety net programs.

For years she sat on the sidelines, frustrated at GOP efforts to cut social welfare programs, often by imposing work requirement on recipients.

But the Democratic electoral victory last November handed the party a majority in the U.S. House and DeLauro the gavel of a House Appropriations subcommittee that sets the budget for the Labor Department, the Education Department and the massive Department of Health and Human Services.

De Lauro’s subcommittee finished work on its spending bill last week, and the U.S. House is scheduled to vote on it Wednesday as part of a “minibus” with four other bills that would fund dozens of other agencies in 2020.

“We focused our efforts on programs that had been starved,” DeLauro said. “I have been fighting for money for these programs for so long.”

DeLauro said she has come full circle to where she was when she first was sworn into Congress in 1991 and sought a seat on the House Appropriations subcommittee that has authority over most of the nation’s education and social programs – and about a third of all non-defense, federal discretionary spending.

“I wanted to be on (the panel) from the beginning,” she said. “There is nothing more rewarding to me.”

For the first time, DeLauro secured federal money — $50 million — for gun violence research. In all, DeLauro’s panel increased the budget for the Labor Department, HHS and the Education Department by $12 billion over last year.

“This bill will provide a tremendous amount of opportunity to Connecticut,” DeLauro said. “I feel very good. We are blessed.”

The bill also nullifies the Trump administration’s “gag rule” that prohibits healthcare providers who participate in federal family planning programs, known as the Title X program, from counseling or referring their patients for abortions. That gag rule has been temporarily blocked in the courts.

But DeLauro’s bill continues to include the so-called Hyde Amendment, a provision included in HHS spending bills since 1976 that bars the use of federal funds to pay for abortion except to save the life of the woman, or if the pregnancy arises from incest or rape.

DeLauro, and House Speaker Nancy Pelosi, D-Calif., said they oppose the Hyde Amendment but there’s no way the HHS spending bill is approved without it, given strong GOP support for the measure.

“I don’t see that there is an opportunity to get rid of it with the current occupant of the White House and some in the United States Senate,” Pelosi said when asked about the inclusion of the Hyde amendment in the bill.

DeLauro has also used her chairmanship to hold a series of hearings on issues close to her heart, including the Trump administration’s policies of separating immigrant children from their parents at the U.S.-Mexico border and weakening the Affordable Care Act,  the conduct of  “for profit” colleges, and gun violence prevention studies. She has held 12 hearings in all.

But DeLauro faces a series of hurdles as she shepherds her first spending bill through Congress.

While the U.S. House may approve the Labor-HHS-Education bill this week as part of the minibus, the Senate has not acted on a single appropriations bill for fiscal 2020, which begins Oct. 1. , preferring to wait until GOP leaders can strike a deal on overall spending levels with Pelosi and the White House.

Congressional leaders will meet again this week to try to come to an agreement, but it may be elusive.

Republicans, and the White House, want Democrats to cut back on their proposed increases in domestic spending, saying it will add to a rapidly rising budget deficit.

Democrats, meanwhile, argue Republicans want to bust budget caps on defense spending, so there should be parity on the domestic side. Democrats also say the president’s tax cut is the reason for the growing deficit.

Funding for Trump’s border wall between the United States and Mexico has also provoked a sharp partisan divide and will likely hinder attempts at compromise.