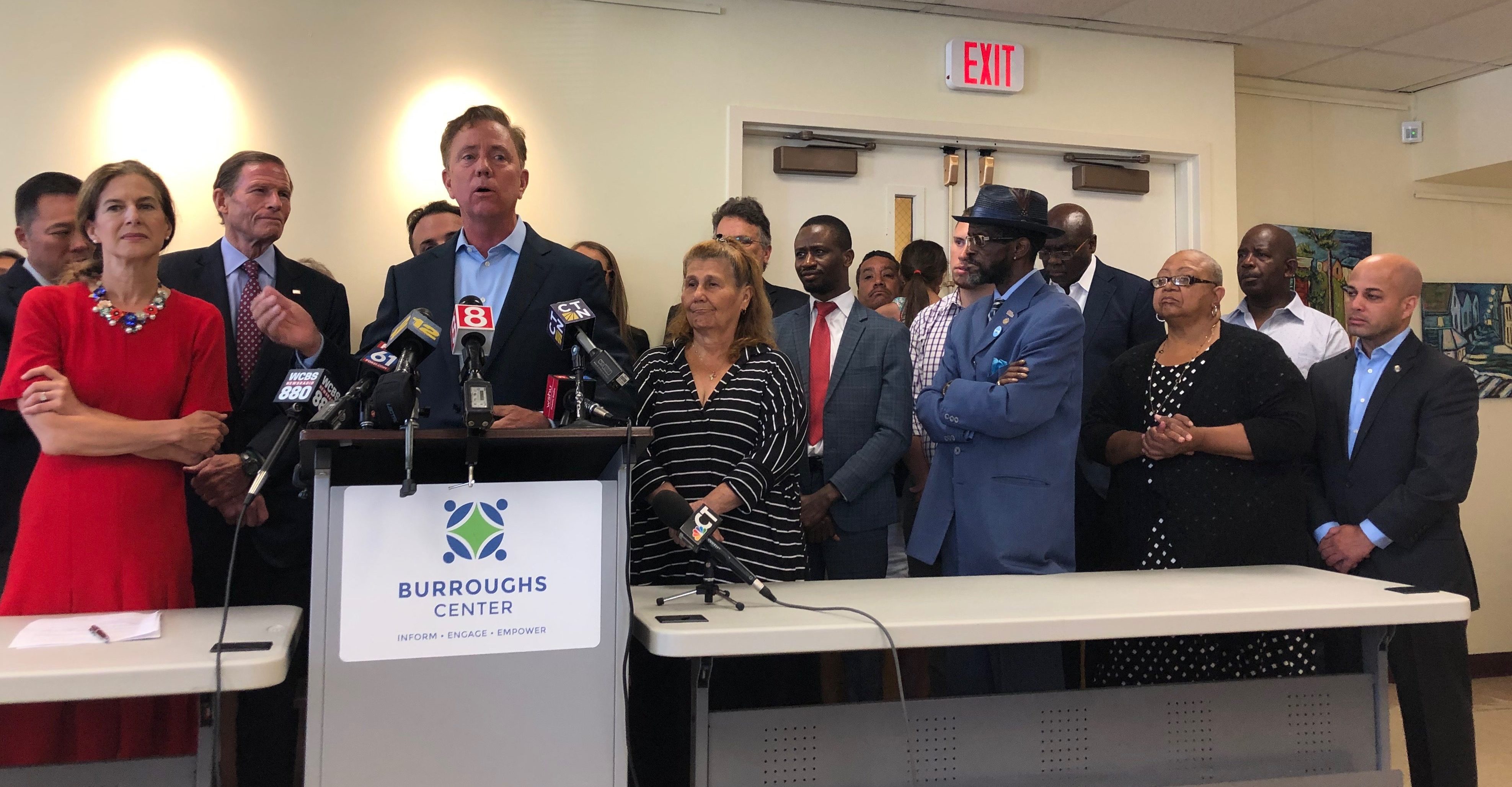 Gov. Ned Lamont and other state officials gathered Friday to denounce the Trump administration’s immigration raids, planned for Sunday in cities across the U.S.

Bridgeport – As federal authorities prepared to deport thousands of migrant families from cities across the U.S., Connecticut leaders gathered in Bridgeport Friday morning to underscore the state’s support of immigrants and refugees.

Immigrations and Customs Enforcement agents are expected to target some 2,000 immigrants who have been ordered deported but have stayed in the country illegally. The operation is set to begin Sunday in at least 10 cities across the country, including New York, Miami, Chicago and Los Angeles. There were no Connecticut cities on the list as of Friday.

Claudia Connor, the president and CEO of the Connecticut Institute for Refugees and Immigrants, said that although no Connecticut cities are listed for Sunday’s raid, the operation nonetheless “ratchets up the level of fear among our clients, to a very, very high degree. Families, individuals are afraid that if they are deported, that their children who are American citizens will be left behind.”

Dr. Takang Besong, the head pastor of Kings Class Family Chapel Worldwide, moved to Connecticut from Cameroon in September 2016. Speaking on behalf of immigrants and refugees across the state, Besong said members of these vulnerable communities are afraid they’ll be forced to return to their home countries after they’ve built lives and families here in Connecticut.

“We are ready to do everything we can to protect and defend Connecticut’s families,” Tong said.

Last legislative session, lawmakers tightened a law that restricts law enforcement and court officials from cooperating with ICE. Tong reiterated that Lamont will give guidance to state officials, agencies and police about their obligations to follow the so-called Trust Act, and remind them “not to be co-opted by the federal government. The state’s stricter Trust Act does not take effect until Oct. 1, however, so any new protections it offers will not be in place for these raids.

“State and local law enforcement need to do their jobs, not the jobs of the federal government,” Tong said.

“This policy can be summarized in two words: fear and cruelty,” said Blumenthal, adding that he has proposed legislation  that would protect immigrants from being arrested by immigration authorities when they are in “sensitive locations” like schools, hospitals and places of worship.

Bysiewicz encouraged those anxious about the upcoming deportations to reference the state’s Family Preparedness Plan, a resource for immigrant families that is available in nine languages.

The impending mass deportations are part of a broader effort by the president to intimidate minority communities, Bysiewicz said. “From ICE raids, to separating families at the border, locking children in cages and weaponizing the Census, the Trump administration has created a climate of fear across our country in immigrant communities and communities of color, here in Connecticut.”