Top GOP lawmaker, however, said approval of the bill led to a 'sad day' 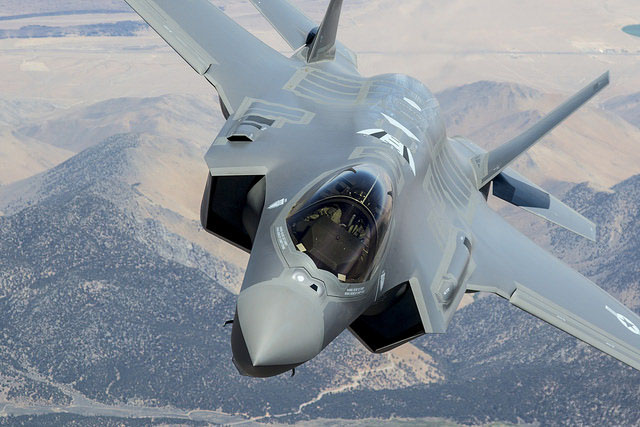 Both the House and Senate have increased Trump’s proposed funding for the F-35.

Washington – The U.S. House approved a defense bill Friday that would boost military spending in Connecticut, but the legislation — which did not attract a single Republican vote — faces a tough fight in negotiations with the Senate over a final bill.

Still, any final bill is expected to increase military spending in Connecticut substantially next year, as there is an agreement among a majority of House and Senate Democrats and Republicans on the need to shore up the nation’s defenses.

The House defense bill, approved Friday on a partisan vote of 220-197, would cut President Donald Trump’s request for the Pentagon from $750 billion to $733 billion  — which is still a substantial boost over this year’s military spending.

But perhaps more objectionable to the White House and congressional Republicans, the House-approved defense bill would  curb the president’s war-making authority.

That sets up a battle with the GOP-controlled Senate over a final National Defense Authorization bill.

The House NDAA contains an amendment that would prohibit funding U.S. military action against Iran unless Congress has declared war or enacted another specific statutory authorization. The legislation includes an exception for cases of self-defense.

The bill also differs from the Senate’s NDAA in that it would require military academies, including the Coast Guard Academy in New London, a “safe to report” policy which allows sexual assault victims to report their assaults without fear of being punished for minor misconduct  — including excessive drinking –they may have committed at the time.

Additionally, the bill would establish a four-year pilot program at the Coast Guard Academy and other military academies in which a special prosecutor would handle complaints of sexual assault and abuse. Currently those complaints are handled through the chain of command.

Connecticut’s Democratic House members on Friday hailed the approval of the legislation.

“The bill we passed today answers the call from our nation’s combatant commanders for additional undersea capacity by including authorization for a third Virginia-class submarine, a vindication of my bipartisan ‘Three Sub’ effort last year which was opposed by the Trump administration,” said Rep. Joe Courtney, D-2nd District.

No border wall, no base closing

As the chairman of the House Armed Services subcommittee in charge of sea power, Courtney help draft the NDAA.

Both the House and Senate have opened the door to the construction of three Virginia class subs in 2023.

The bill also authorizes $1.6 billion to continue work in Connecticut and Virginia on the new, massive Columbia-class nuclear ballistic missile submarine and $73 million to build a new pier at the Naval Submarine Base New London.

Similar shipbuilding provisions were included in the Senate bill, which was approved in June, and are not expected to be a point of contention.

But there may be dispute between the chambers on how many F-35s the Pentagon can purchase next year. The jet’s engines are built by Pratt & Whitney.

The House defense bill provides $8.5 billion for the procurement of 90 F-35s and the Senate bill includes more than $10 billion for 94 Joint Strike Fighters. The president’s budget only called for 78 F-35s.

The Senate bill authorizes $807.9 million to fund 6 CH-53K “heavy lift” helicopters for the U.S. Marine Corps and $1.3 billion for 66 UH-60M Black Hawks, which are also built by Sikorsky in Connecticut.

The House bill also authorizes nearly $808 million for the heavy lift helicopters but raises the number of Black Hawks the Pentagon can buy next year to 73.

On Tuesday, Rep. Rosa DeLauro spoke about the House NDAA to a group interns at Teamsters Local 1150, all of them currently employed with Sikorsky Aircraft.

“Sikorsky builds the best helicopter in the world and there is a recognition of that by the Department of Defense and the armed services. So there’s unanimity about making a major investment here,” DeLauro said.

There are billions of dollars more for Connecticut defense projects, including Sikorsky search and rescue helicopters and the specially equipped helicopters used by the White House, as well the B-21 Long Range Strike Bomber program, whose engines will be produced by Pratt & Whitney.

The House NDAA also prohibits the use of any defense money to build Trump’s proposed wall between the United States and Mexico and blocks another round of military base closings.

A final NDAA is likely to bring more defense money to Connecticut than it has had in many years.

But, to get to that point, a partisan feud over the defense authorization bill must be resolved.

“It’s really a sad day,” House Minority Whip Steve Scalise, R-La., said Friday. “We’ve all seen the internal problems within the Democrat conference. But just to appease the far-left socialist radical element, Speaker (Nancy) Pelosi is putting our troops at risk by drafting a bill that breaks with that 58-year tradition of moving a bipartisan NDAA bill that puts our troops first.”