Rep. Rosa DeLauro and fellow Democrats hold a press conference outside a center that holds migrant youth in Homestead, Fla.

Rep. Rosa DeLauro and a group of fellow Democrats toured a facility that holds migrant youth in southern Florida on Monday and said they are both dissatisfied with conditions at the center and information they received about the children’s care.

DeLauro , D-3rd District, said the lawmakers left the Homestead Temporary Shelter for Unaccompanied Children with questions about the standard of care at the center and about how long it takes for children to be placed with family in the United States.

She and other members of the House Appropriations Committee who traveled to the Homestead facility said they spoke to children who have been there 44 days, 60 days, and longer. Some of the children told the lawmakers they had contact information for close relatives in the United States, but there has been no effort to reunite them with family members.

“There seems to be a logjam in placing these children,” DeLauro said.

The Homestead facility — and other centers that house migrant youth —  are under contract with the Department of Health and Human Services. DeLauro is the chairwoman of the House Appropriation subcommittee with authority over the HHS budget.

She plans to demand more information about the centers housing migrant children at a subcommittee hearing on July 24. 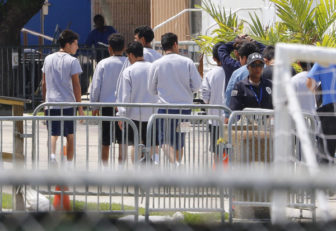 “Rest assured, we are going to keep their feet to the fire,” DeLauro said.

After a migrant center in Tornillo, Texas was closed in January following reports of mistreatment of immigrants there, the federal government expanded operations at the Homestead Temporary Shelter for Unaccompanied Children and opened a new center in Carrizo Springs, Texas.

Advocates say these holding centers have traumatized children through overcrowding and inadequate staffing.

“This is the United States of America, we have to be human,” said Rep. Charlie Crist, D-Fla.

He and other members of the delegation that visited the Homestead center on Monday said the noise in the overcrowded facility hinder any attempts to educate the children, most of whom are between the ages of 13 and 17.

“You can’t learn anything, the noise is overwhelming,” DeLauro said.

The Democratic lawmakers also said they were shocked to learn that once a child turns 18, he or she is “shackled” by Immigration and Customs Enforcement (ICE) agents and arrested.

In recent months, there’s been a dramatic spike in border crossings of migrants, including unaccompanied children. Most come from the countries of Guatemala, Honduras, and El Salvador and have had to travel through Mexico to reach the United States. Many have turned themselves in at U.S. Border Patrol stations and claimed asylum.

DeLauro and her fellow Democrats visited the Homestead facility following a tough week for Customs and Border Protection and the Border Patrol, which is reeling from personnel and leadership scandals. Agents were caught making racist remarks on a Facebook group and minting a commemorative coin mocking their duty to care for migrants.

At least 12 migrants have died in CBP custody since September.  Minors, however, are placed in the custody of the Department of Health and Human Services.

The congressional delegation’s visit to the Homestead facility also occurred after the Trump administration was expected to begin a crackdown on immigrant families with deportation orders, but there have not yet been reports of widespread arrests.

On Monday, the Trump administration published a new rule in the Federal Register, to take effect immediately, that would require most migrants entering the United States from the nation’s border with Mexico to first seek asylum in one of the countries they travelled through. Only if that application is denied would they be able to seek asylum in the United States.

Rep. Debbie Wasserman-Shultz, D-Fla., said the president does not have authority to change U.S. asylum policy, which she said rests with Congress.

“The president is not a dictator,” Wasserman-Shultz said. “He cannot just decree he’s going to change standards…it will be challenged in court.”