Family of man killed by police calls for release of video footage, reports 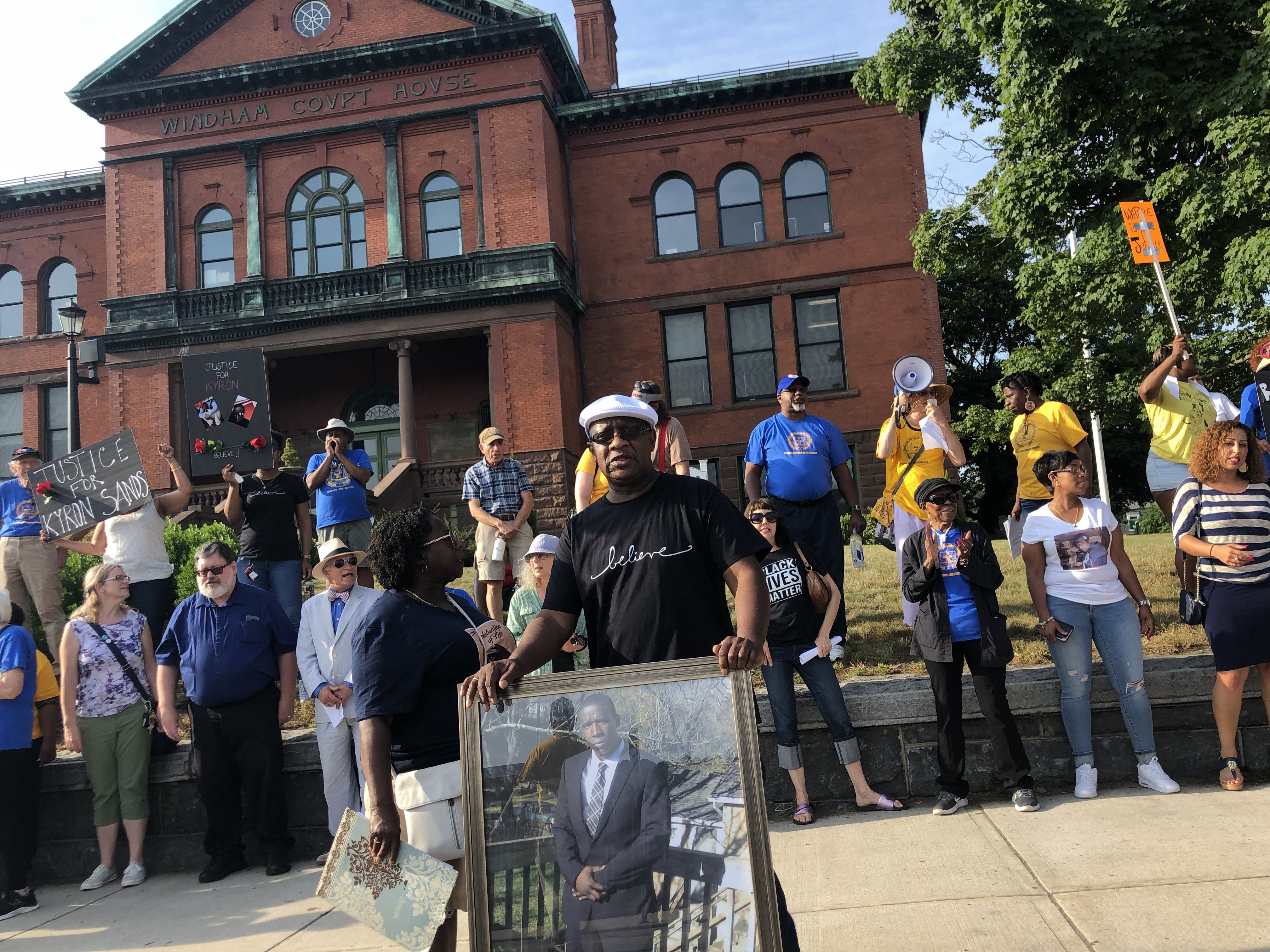 Keith Sands holds a picture of his son as roughly 50 community members join him in calling on the state to make public information on the death of his son, whom police killed last February.

Windham — Holding a framed picture of their slain son, Keith and Barbara Sands called on the state Tuesday evening to release police body- and dash-cam video footage of the shooting that resulted in the death of their second-born child, Kyron Marcel Sands, last February.

Listing a slew of unanswered questions —What was the name of the officers who shot Kyron? Was he unarmed when he died? What are police protocols for responding to a mental health crisis?— Keith Sands said the family was seeking answers after being left in the dark for the five months following their son’s death.

“No one has contacted and told us anything,” Sands said. “He’s never coming back. That’s something that we all have to live with.”

Summarizing the goals of Tuesday night’s news conference, Leah Ralls, the president of the Windham/Willimantic branch of the NAACP, said supporters were calling on officials to release their report on the shooting, as well as any dash cam footage, and to sit down with the Sands family and update them on the case, which Ralls said would be “an acknowledgement of their pain.”

According to news articles published at the time of the shooting, police first made contact with Kyron Sands that day, Feb. 20, in Norwich, where he had allegedly been attempting to break into an apartment building. Sands and officers exchanged gunfire before Sands stole a car and drove onto Interstate 395.

Law enforcement chased Sands through several cities and towns, during which Sands reportedly fired a gun at civilians and police officers.  Officers deployed stop sticks in Windham, forcing Sands out of his vehicle. At least one bullet struck Sands in the stomach, according to initial reports. He was pronounced dead at the scene.

Standing outside the Windham Town Hall Tuesday night, Barbara Sands said the autopsy report her family recently saw showed Kyron had been shot in the back, not in the stomach, as police claimed. She said Kyron, whom she called, “my baby, my best friend,” had been experiencing a psychotic break at the time of his death, and deserved help, not lethal force.

“When he was on his medications, he made better choices,” Barbara Sands said. “When he’s off, he has problems, and he starts to hear things.”

The 39-year-old’s mother said Kyron had had run-ins with the Norwich Police before, and they should have known to send a Mobile Crisis Team after getting the initial call about an alleged break-in. “It would have been a totally different outlook,” Barbara said. “Whoever was in charge, I want them to be held accountable, and I don’t want another family to have to go through this.”

Kyron’s cousin, Tonìa Marable, said Connecticut must do a better job of caring for its residents who suffer from schizophrenia. “Those people deserve to be treated with civility, and proper care,” Marable said. “I’m so sorry this had to happen to my cousin, but if we can help one person, one family, so that they don’t have to suffer like my uncle and my aunt had to, we would have did some work today.”

There have been about 70 reported uses of deadly police force throughout Connecticut since 2001, according the Windham/Willimantic NAACP. In the majority of those cases, civilians lose their lives and the police are cleared of any wrongdoing.

About a week after Sands was killed, a jury convicted  Andrew Samuolis, a white man, of killing his father and shooting a police officer. Advocates outside the Windham Town Hall pointed to the different outcomes in Sands’ and Samuolis’ interactions with police as evidence that African-American suspects are treated differently than whites.

State Rep. Susan Johnson, D-Windham, called on the state to make public its report on the shooting, and that doing so would help lawmakers to craft better policies and training procedures to make these shootings stop.

“We need to make sure black people feel just as safe as white people when they go out,” Johnson said.

Brian Foley, the executive assistant to Public Safety Commissioner James Rovella in the state’s Department of Emergency Services and Public Protection, said his office has finished its investigation of the shooting and sent its report to the Chief State’s Attorney’s Office, which did not respond to the Mirror’s request for comment.

Earlier this month, Gov. Ned Lamont signed into law a bill designed to make police officers’ work more transparent. Among other things, Senate Bill 380 requires dashboard and body camera recordings be made available to the public within 96 hours of an incident, and the release of preliminary investigative findings within five days after a cause of death determination. These mandates of the new law will not go into effect until Oct. 1, 2019. It will not apply retroactively, meaning Sands’ case will not be subject to the same requirements. Regardless of SB 380, state agencies still can make these items public, though they are not subject to the same time frames.

“We’ve already taken a strong stance toward support for that bill,” Foley said, noting that the commissioner has quickly released video footage from recent police shootings in Danbury, Wethersfield and New Haven. “As we believe, that bill could have been even stronger.”

Glancing at the framed photo of Kyron dressed in a spiffy suit on a wooden porch, Keith Sands said he was proud of his son.”I would have rather had visited him in prison,” Keith said, “than to actually have to mourn him, as we’re doing right now.”

Connecticut's newest justice was confirmed unanimously in the House and on a 34-1 vote in Senate.

The House voted unanimously to confirm Christine E. Keller to the Supreme Court and three others to the Appellate Court.

More than 1,500 inmates have tested positive for COVID, and, they say, long-standing systemic issues also need to be addressed,

Drops in burglaries and property crime were also among the biggest reductions in the country.