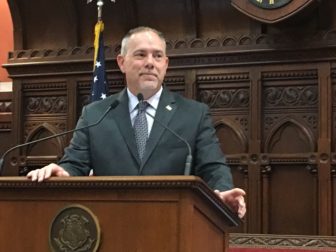 Gov. Ned Lamont’s fellow Democrats in the legislature may try to override at least one of the three vetoes he issued last week.

House Speaker Joe Aresimowicz, D-Berlin, said members of his chamber haven’t caucused yet, but there’s a good chance they will want to resurrect a bill on workforce training needs.

“I anticipate us taking action,” Aresimowicz said Tuesday, calling the measure “a house priority and an important economic development bill.”

Legislators will return to the Capitol on July 22 for a veto session.

But another section of the bill includes a controversial provision involving those who work for tips in Connecticut — and this is the portion that sparked Lamont’s veto.

Current law allows employers to pay a lesser minimum wage to employees who work for tips.

And if an employee has blended duties, spending some time working for tips and other time performing duties that don’t involve gratuities, employers are required to segregate the hours and pay different rates in accordance with the different job tasks.

If an employer doesn’t keep track of how much time is spent working for gratuities versus tip-free work, they must pay the standard minimum wage for all work.

But the bill Lamont vetoed would have required the state Department of Labor to craft new regulations in this area patterned after federal labor rules. These rules allow employers to pay employees with blended job responsibilities the lower minimum wage for all work.

“While it may be reasonable to conclude that state and federal laws should be consistent in this area, that conclusion ought to be made only after sufficient study, debate and input from affected stakeholders,” Lamont wrote in his veto message. “That did not happen here.”

The governor also objected to another provision in the bill which would have made these regulation changes retroactive to any pending labor complaints or other civil actions, something Lamont called  “patently unfair” and raising “serious due process and other constitutional concerns.”

The legislature voted earlier this year to enact a bill to raise the state’s standard minimum wage from $10.10 per hour to $15 per hour by June 1, 2023.

It would require two-thirds of the 151-member House, or 101 representatives, to override a veto. It would also require 24 of the 36 senators to agree.

One would have changed a statute regarding the theft of waste vegetable oil used in restaurants. The oil sometimes is stolen because it can be sold to recycling firms. Lamont argued the penalty imposed in the new bill — up to one year in prison — was too high.

The other bill that was vetoed would have removed a requirement that real estate agents disclose whom they represent to potential buyers before negotiations begin.