Blumenthal to travel to U.S.-Mexico border to investigate migrant detentions 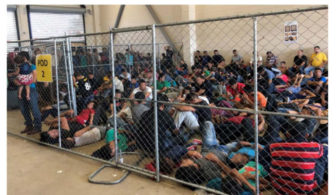 Overcrowding at Border Patrol’s McAllen, Tex. facility as observed by Office of Inspector General on June 10.

Washington – Sen. Richard Blumenthal will be traveling to the U.S.-Mexico border this weekend as part of a Senate delegation that aims to investigate the detention of migrants.

The trip will also allow the senators to assess how the Trump administration is handling an increased flow of immigrants to the United States from Central America.

Senate Minority Leader Charles Schumer, D-N.Y., said he is leading the delegation of at least a dozen senators to “investigate, inspect and evaluate the latest conditions at (migrant) facilities.”

Blumenthal said he expects the delegation will be hindered in its investigation.

“They aren’t likely to show a group of 14 senators the real picture in all its inhumanity,” Blumenthal said. “But we will be talking to people whose eyes and ears are everywhere.”

“We are going to talk to people on the ground,” he said.

“They aren’t likely to show a group of 14 senators the real picture in all its inhumanity. But we will be talking to people whose eyes and ears are everywhere.”

The group of Senate Democrats plan to visit sites in McAllen, Tex., including a detention facility visited by Vice President Mike Pence last week in which reporters saw migrants crowded in facilities without beds or showers.

The detention of minors, especially those who have been separated from their parents at the border, has also come under scrutiny.

On the Senate floor Thursday, Schumer said “faultless kids, many traveling alone and many very young, are subject to inhumane conditions without the proper health care, nutrition, hygiene or space.”

“No one should want to see these kids treated so inhumanely. All they’re doing is fleeing for a better life,” the minority leader said.

The trip to the border comes as Schumer is being slammed by progressives for agreeing to support a bill that gave President Donald Trump billions of dollars for border operations with no real requirements that the federal government improve conditions at the camps where migrants are held.

Progressive Democrats in the U.S. House are concerned that the bill allows the Trump administration to siphon money away from humanitarian relief toward policing migrants.

The trip also comes after Trump used his executive authority to change U.S. asylum law when it comes to Central Americans. Under the new Trump administration rules, migrants would have to apply for asylum, and be denied, in the nations they travel through before they could apply for asylum in the United States.

The American Civil Liberties Union and immigrant advocate organizations have filed lawsuits to try to block implementation of the new asylum rules.

Blumenthal’s visit to the border is the second since the Trump administration implemented a “zero-tolerance” policy aimed at detaining all undocumented immigrants who try to enter the United States, even those who are trying to make asylum claims at border checkpoints.

That has resulted in family separations, as a court order known as the “Flores settlement” forbids the federal government from holding minors in the same facilities as adults for more than 20 days. After that deadline, those minors, and others who came to the United States on their own, are to be held in facilities run by the Department of Health and Human Services.