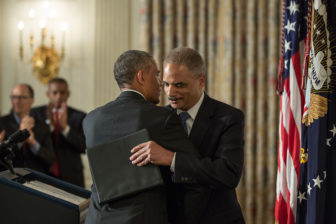 America’s longstanding democratic institutions are under assault by the Trump administration’s policies, former Attorney General Eric Holder told a roomful of about 300 attorneys in Hartford Thursday night, but the country has weathered similar threats throughout its history and will survive should its residents band together and fight for those most in need.

“The social progress that we have made as a nation, long sought and long fought for, is at risk,” Holder said. “But just as this is an hour of great need, it is also a moment of significant opportunity.”

Holder, the first African American to serve as the U.S. Attorney General, a position he held from 2009 to 2015 in the Obama administration, delivered remarks at the G. Fox Building for Greater Hartford Legal Aid’s third annual “Celebrating Leaders for Justice.”  Holder’s keynote speech capped off an evening celebrating GHLA’s work providing free civil legal services for the elderly and low-income residents of the Hartford area.

Since leaving the Justice Department, Holder has helped states in legal battles against the Trump administration’s policies, fought to end gerrymandering and improve individuals’ voting rights and sued to block Trump’s plan to add a citizenship question to the 2020 census, a controversial scheme Trump officials abandoned earlier this month.

“We kicked their asses,” Holder said of the census victory, to laughter. “I meant to say we won decisively.”

Holder lauded Greater Hartford Legal Aid for representing clients in more than 3,000 legal matters in 2018, helping almost 8,000 people in dire need of assistance. To qualify for GHLA’s services, clients must earn less than 125% of the federal poverty level, or about $32,000 for a family of four.

Holder’s short speech heavily emphasized the importance of diversity in the legal profession and in the county as a whole, and underscored the lifeline that legal assistance can offer vulnerable people and families.

“Every single person in this country deserves equal treatment under the law,” Holder said. “It doesn’t matter what kind of law you practice, each of us can, and each of us must, find ways to contribute to the public good.”

Positive change is possible, not promised, Holder told the crowd.

“We must commit ourselves as a profession and as a nation to making real the opportunities that are the birthright of every American,” he said. “I call on everyone here tonight, and lawyers around the country, really, to commit yourselves to making this nation live up to its founding documents.”