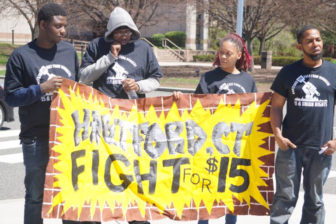 Washington – Connecticut’s delegation to  the U.S. House, as well as most of their Democratic colleagues, united Thursday behind a bill that would raise the minimum wage to $15 a hour for all American workers.

The bill was approved 231-199 on a largely party line vote, with six Democrats voting against the bill and only three Republicans voting for it.

The legislation, which could die in the Senate, would raise today’s $7.25 federal minimum wage by increments to $15 an hour by 2025.

Thursday’s vote was a win in the “Fight for $15” movement, launched in 2012 by the nation’s fast food workers.

The vote also helped unify the House Democratic caucus. The wage hike was negotiated for months because moderate Democrats were concerned about the impact of a higher minimum wage on small businesses and in rural areas where pay scales are lower than in the nation’s larger cities.

Those moderates won some concessions, including raising the minimum wage over six, instead of five, years. The bill would also require relevant congressional committees in the House and Senate to make recommendations on whether future scheduled wage increases should be delayed, modified or allowed to go forward when the minimum wage hits $9.85 an hour.

Many states, including Connecticut, have not waited for Congress to act. About 30 states have already imposed their own minimum wage increase above the federally mandated $7.25.

Connecticut and six other states have approved laws that phase in a $15 minimum wage. Other states moving toward a $15 an hour minimum wage, include Illinois, Maryland, Massachusetts, New Jersey and New York, are home to cities with a high cost of living. 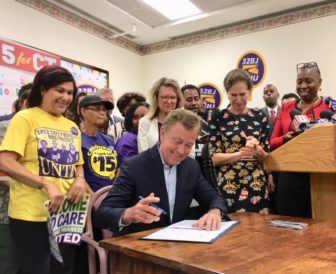 But the law also sets a sub-minimum training wage for workers ages 16 and 17, who could be paid 85 percent of the state minimum for up to 90 days; and imposes a freeze on the minimum wage for tipped workers, $6.38 for wait staff and $8.23 for bartenders.

The minimum wage bill approved by the House on Thursday would lift salaries to $15 an hour for all workers, including 16 and 17-year-olds and tipped workers.

“At a pitiful $7.25 an hour, the current federal minimum wage fails to reflect the true cost of living across the United States,” said Rep. Joe Courtney, D-2nd District.

Rep. John Larson, D-1st District, a co-sponsor of the bill said “ everybody deserves to be paid a living wage for their work.”

Republicans in the Senate, however, say a sweeping minimum wage hike will kill jobs.

The reality is there will be winners and losers. According to a recent report by the Congressional Budget Office, more than 30 million workers would see bigger paychecks and 1 million people would be lifted out of poverty if the $15 minimum were put in place. But the CBO also said that between 1 million and 3 million low wage jobs could be lost.

Democratic presidential candidates have made “Fight for $15” a rallying cry and Juan Hernandez, Vice President of 32BJ SEIU Connecticut, a union that represents low-wage workers, said Thursday’s House vote on the minimum wage will also be a factor in congressional elections.

“Next year, voters will remember which members of Congress voted to balance the scales and lift millions of Americans out of poverty by supporting the $15 an hour minimum wage,” Hernandez said.

One thought on “U.S. House approves minimum wage hike to $15 an hour”