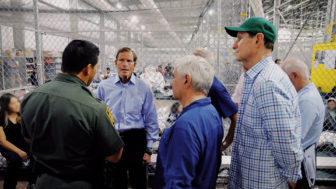 Blumenthal was part of a delegation of about a dozen Democratic senators led by Senate Minority Leader Charles Schumer, D-N.Y.  who toured several facilities in McAllen, Tex., to investigate the conditions there.

The Democrats blamed the GOP and the Trump administration for an immigration crisis that began after President Donald Trump implemented a “zero-tolerance” policy aimed at detaining all undocumented immigrants who try to enter the United States, even those who are trying to make asylum claims at border checkpoints.

That has resulted in crowded detention facilities and the separation of immigrant children from their parents since an agreement known as the “Flores settlement” forbids holding minors with adults for more than 20 days.

“But what is needed is comprehensive immigration reform,” Blumenthal said.

At a press conference in McAllen, Schumer said the lawmakers saw ‘one good place,” a facility run by Catholic Charities, in which migrants were treated well.

Although there’s been recent efforts to ease crowding at other facilities, the conditions there are still deplorable, Schumer said.

Sen. Bob Menendez, D-N.J., said one child migrant said his family was forced to leave their home in  Central  America “because they were killing so many people there.”

While Democrats are likely to characterize the migrants trying to enter the United States as people who are fleeing violence and chaos in Central America, Trump and congressional Republicans say they are economic migrants looking for a better standard of living and that many are criminals.

They say the crisis at the border has been caused by Democrats who have opposed tough immigration policies and Trump’s plan to build a border wall.

Schumer said “only two or three percent” of the migrants have criminal records.

The situation does not seem to have any immediate solution.

Trump this week used his executive authority to change U.S. asylum law when it comes to Central Americans. Under the new Trump administration rules, migrants would have to apply for asylum, and be denied, in the nations they travel through before they could apply for asylum in the United States.

Meanwhile, Democrats in Congress plan to continue to hold hearings on the Trump administration immigration policies. At one of those hearings this week, Rep. Alexandria Ocasio-Cortez, D-N.Y.,  questioned Acting Homeland Security Secretary Kevin McAleenan about the whereabouts of Border Patrol agents who threatened her in a  secret Facebook group that had current and former Border Patrol officers as its members.

Trips to detention facilities by Democratic members of Congress will also continue.

Although it was Blumenthal’s second trip to the U.S.-Mexico border since Trump assumed office, he said his latest visit has affected him.

“I think that what we’ve seen here is going to haunt us for some time to come,” Blumenthal said.