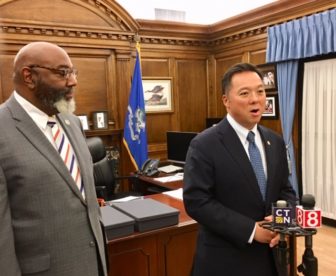 Attorney General William Tong, right, and Carleton J. Giles, the chair of the pardons board.

Connecticut’s attorney general challenged the Trump administration Monday over an Obama-era deportation case that has called into question whether a pardon issued by the state Board of Pardons and Parole is sufficient to stave off a deportation over a criminal conviction.

Richard Marvin Johnson was 18 when convicted of second-degree assault after a fight in 2001. He got off with a suspended sentence, but ICE would cite the crime as grounds for removal in 2012, the high-water year for deportations in the U.S.

The administration of Barack Obama deported nearly 420,000 people in the midst of the Criminal Alien Removal Initiative of 2012, a crackdown that produced an annual record that President Donald Trump has yet to match.

A series of appeals to the Board of Immigration Appeals failed to end the effort to deport Johnson, a Jamaican citizen who was living in Bridgeport with a green card as a legal U.S. resident. But it bought him time.

The state Board of Pardons and Paroles granted him a “full, complete, absolute, and unconditional” pardon on December 13, 2017, which the office of Attorney General William Tong says “has the legal effect of erasing his criminal record and even the fact of any arrest.”

In oral arguments heard Monday in Boston by the U.S. Court of Appeals for the First Circuit, Johnson’s lawyer and Connecticut’s attorney general argued that the grounds for his deportation disappeared on the day Johnson was pardoned.

The appeal was heard in Boston because Johnson was detained there when he filed his appeal. He now is in a detention center in Alabama.

Johnson is one of two Connecticut residents currently detained by ICE and awaiting deportation over criminal convictions, despite winning full pardons.

The other is Wayzaro Walton, a British citizens and permanent legal resident who was living in Hartford. Filed while still living in Connecticut, her case is currently before the U.S. Court of Appeals for the Second Circuit in New York. She has been detained in Boston since March, arrested before her pardon was finalized.

The Trump administration disagreed with Connecticut and Johnson, noting in its appellate brief that the “pardon waiver clause” cited by Johnson clearly applies only to pardons issued by the president or a governor.

In Connecticut, pardons are issued by gubernatorial appointees to the Board of Pardons and Parole, but not by a governor.

In its appellate brief, the Justice Department said the Board of Immigration Appeals was correct in refusing to recognize the Connecticut pardon as grounds for stopping the deportation of Johnson because of his criminal conviction, even if state, local and federal law enforcement no longer considers him an ex-convict.

“The pardon waiver statute is unambiguous and the Board’s interpretation should be upheld,” wrote Jessica E. Burns, an immigration lawyer with the Justice Department in Washington.

Tong, whose office intervened by filing an amicus brief in Johnson’s appeal, was permitted to argue before the court. Tong said his presence underscored to the court Connecticut’s belief that its interests were at stake.

“Connecticut has a compelling interest in ensuring that the federal government does not treat its immigrant residents differently and worse from those of other states,” Tong’s office wrote its brief. “More than one in seven Connecticut residents – well over 500,000 people – is an immigrant, while another one in eight is a native-born U.S. citizen with at least one immigrant parent. These residents are vital members of Connecticut’s communities, its workforce, and its families.”

In a press conference later Monday in Hartford, Tong conceded that the pardon waiver provision explicitly refers to pardons by the president and governors. But Tong said the pardons board is an executive agency, its members appointed by the governor.

Tong questioned why immigration officials were questioning the validity of pardons in Connecticut, a blue state, while there is no record of similar denials involving pardons from five red states with similar boards: Alabama, Georgia, Idaho, South Carolina, and Utah.

“The key issue here is that the Board of Immigration Appeals, all of a sudden, just decided to treat Connecticut pardons differently from pardons in every other state,” said Greg Romanovsky, a Boston lawyer who represented Thompson, according to Connecticut Public Radio.

The Justice Department had no public comment, but argued in its brief that its position was legally correct and the Court of Appeals has no grounds to overturn the removal order.

“The language of the pardon waiver is clear: the relevant grounds of removability can be waived only by pardons granted by the President of the United States and the Governors of the several states and, as Thompson admits, Connecticut’s Board of Pardons is a legislative creation, “ the department wrote. “Because the Board’s interpretation is consistent with the plain statutory mandate, the Board did not commit any reviewable legal error in declining to reopen Thompson’s case.”

“Even if the pardon waiver statute contained some ambiguity,” the Justice Department wrote, “the Court should still decline to exercise jurisdiction over this case because the Board’s interpretation of the ambiguous statutory language is reasonable, such that its exercise of discretion was not based on a legal error.”