Q-poll: Support for Biden surges among Dems, Trump holding his own 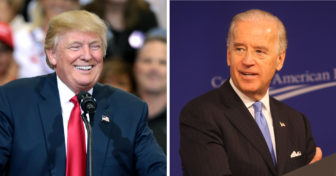 President Donald Trump and former Vice President Joe Biden. Biden is holding onto his lead among Democratic candidates hoping to beat Trump in 2020.

Washington – A national Quinnipiac University poll released Monday shows former Vice President Joe Biden’s popularity has surged among Democrats since a similar survey was taken about a month ago.

Meanwhile, 32 percent of all American voters told Quinnipiac pollsters they would “definitely” vote for Trump if he is the Republican candidate in the 2020 presidential election, while 12 percent say they will consider voting for Trump.

But 54 percent of all American voters polled said they “definitely” will not vote for Trump, matching the “never Trump” total from a May 21 Quinnipiac University National Poll.

The new Quinnipiac poll showed Biden was the favored candidate to run for president among 34 percent of Democrats and “Democratic leaners” surveyed, followed by Sen. Elizabeth Warren, D-Mass., who won 15 percent of their support.

The latest poll shows Biden’s popularity rose 12 percent since Quinnipiac’s last survey, which had the former vice president favored by only 22 percent of respondents. That poll was taken shortly after the Democratic presidential debate.

During those debates, Harris attacked Biden’s opposition in the 1970s to school busing to achieve the desegregation of public schools.

That attack seemed to help Harris, whose popularity surged in several polls, including the one Quinnipiac conducted a month ago. But support for Harris dropped by 8 percent in the latest university poll.

Biden also has the best chance of beating Trump in the general election, said 51 percent of Democrats polled by Quinnipiac, with 10 percent for Sanders and 8 percent each for Harris and Warren.

But Snow said Warren seems to be the one to watch.

“While Biden and Sen. Kamala Harris have been riding a seesaw of support, Sen. Elizabeth Warren is holding steady in the support she’s seeing from Democrats and Democratic leaners and she remains the candidate seen as having the best policy ideas,” she said.