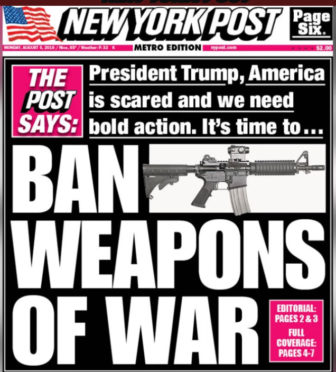 The front page of the Aug. 5 New York Post.

Washington – Thirty-one people were killed by semi-automatic weapons in two mass shootings over the weekend, but Democratic leaders have so far avoided calling for the reinstatement of a federal ban on those weapons in favor of a more moderate response.

The weekend’s violence provoked the Rupert Murdoch-owned New York Post, a right-leaning publication, to demand the banning of “weapons of war.”

But Democratic congressional leaders, who could press for action on an assault weapons ban, turned to a more modest response – pressing the GOP Senate to move on House-approved bills that would expand FBI background checks of prospective gun purchasers.

House Speaker Nancy Pelosi and Senate Minority Leader Charles Schumer said in a joint statement Monday that the Democratic-led U.S. House in February “promptly did its duty and passed the Bipartisan Background Checks Act of 2019.”

“However, Senate Republican Leader Mitch McConnell has called himself the ‘grim reaper’ and refuses to act on this bipartisan legislation. It is incumbent upon the Senate to come back into session to pass this legislation immediately,” the Democratic leaders said.

Sen. Dianne Feinstein, D-Calif., is the Senate sponsor of an assault weapons ban that is co-sponsored by Sens. Richard Blumenthal and Chris Murphy.

On Monday, Feinstein blamed McConnell for failure to move her bill in the Senate, but there are four bills in the House that would re-establish a federal ban on assault weapons that have failed to move in a chamber controlled by Democrats.

The leading bill was introduced by Rep. David Cicilline, D-R.I., and co-sponsored by all five members of Connecticut’s delegation to the U.S. House.

After the weekend’s violence, Cicilline called for the Senate to act on the expanded FBI background check bills – and for the U.S. House to return from its August recess to act on his legislation.

“As we have seen time and time again, it is far too easy for bad people to buy guns in our country. Congress must act now,” Cicilline said.

In his “manifesto” the El Paso gunman lamented that his WASR 10 rifle, an AK-47 variant, couldn’t match the lethality of an AR-15.

That Texas shooting came six days after a gunman killed three people at a garlic festival in Gilroy, Calif., with an AK-47-style weapon legally purchased in Nevada, but illegally brought to California, which is one of seven states, including Connecticut, to ban sales of semi-automatic weapons. 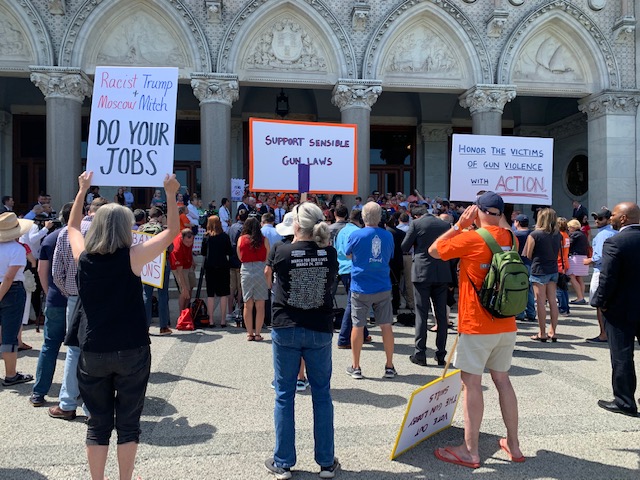 The shooter who killed 9 people in Ohio on Sunday used what the police described as an “assault-style rifle” when he opened fire in a busy entertainment district in Dayton, Ohio.

The types of guns used in these killings were banned by the federal government in a wide-
sweeping  crime bill approved by Congress in 1994 and signed into law by former President Clinton.

That federal law included a prohibition on the manufacture for civilian use of certain semi-automatic firearms that were defined as assault weapons and large-capacity ammunition magazines. That ban expired in 2004.

Pelosi’s office did not respond to a request for comment Monday on an assault weapons ban, which would prove much tougher for some House Democrats to support than expanded FBI background check bills.

But Rep. John Larson, D-Conn., on Monday called for votes in the U.S. House and Senate to reimpose it.

“Since the ban on assault weapons expired in 2004, these weapons of war have been used time and time to murder innocent people,” he said. “The House and Senate must vote on the Assault Weapons Ban of 2019. Enough is enough.”

Rep. Jim Himes, D-4th District, also called for stronger action than that being proposed by his Democratic leaders.

“Today, I call on the Congress to finish the work of requiring that anyone exercising their Second Amendment rights undergoes a background check to ensure that they are not a danger to others,” Himes said. “I also call upon the Congress to remove every weapon of war from our streets. Assault rifles, 100 round ammunition drums, bump stocks and silencers must be in police stations and military barracks and nowhere else.” 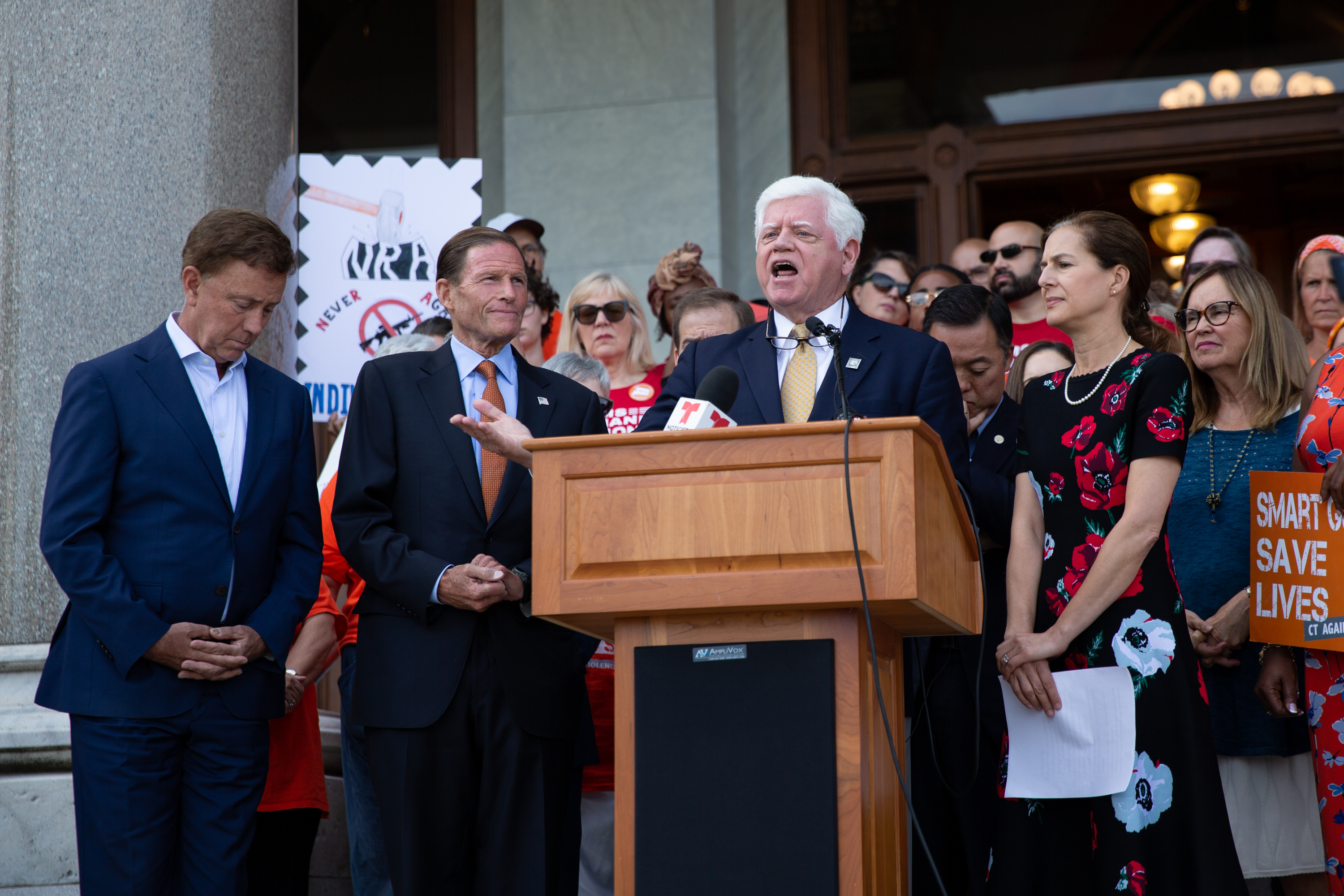 Rep. John Larson, D-Hartford, took aim at Republicans during a rally in Hartford on Monday, saying they have blocked sensible gun laws.

After the 1994 midterm elections, many Democrats blamed historic losses in the House and Senate on their support for stricter gun laws. Serious discussion of gun control measures did not happen again until the 2012 massacre at Sandy Hook Elementary School.

But the National Rifle Association, which spent millions attacking Democrats who voted for the 1994 gun control legislation, is in disarray now.

Three NRA board members resigned last week amid continued legal battles and infighting that has shaken the gun-rights group.

And public sentiment for stricter gun control laws is growing. A July survey by the Watson Center for Public Policy, taken before the latest mass killings,  showed 65 percents of voters said they support a ban on assault weapons  — 49 percent of Republicans polled and and 84 percent of Democrats.

The NRA on Monday said it “welcomes the President’s call to address the root causes of the horrific acts of violence that have occurred in our country.”

In remarks Monday at the White House, President Donald Trump urged the nation to condemn bigotry and white supremacy and focus on combating mental illness.

The president outlined a number of possible steps, including so-called “red-flag laws,” that focus on better identifying mentally ill people who should not be allowed to purchase firearms.

“It has been the NRA’s long-standing position that those who have been adjudicated as a danger to themselves or others should not have access to firearms and should be admitted for treatment,” the NRA said in a statement in response to the weekend’s violence.

Connecticut was a leader in implementing a “red flag” law, which allows the seizure of guns from people who might hurt themselves or others. The state approved this law in 1999, in response to a mass shooting at a state lottery office.

Another gun rights group, considered more radical than the NRA, pressed Congress and state legislatures to do nothing.

Senior Vice President of Gun Owners of America Erich Pratt said the shootings in El Paso, Tex., and Dayton, Ohio “are tragic, yet they remind us that life is precious and worth protecting — and that firearms in the hands of honest citizens are the best way to protect both liberty and security.”

“This is why GOA is calling on the president, Congress and state legislatures to utterly reject any calls for gun control, including Universal Background Checks, so-called ‘Assault Weapon’ Bans, and so-called Red Flag laws.”

Connecticut was also a pioneer in banning assault weapons, approving legislation to do so in 1993. But the weapon used by Sandy Hook shooter Adam Lanza was a Bushmaster Model XM15-E2S rifle, modified by the manufacturer to not fit Connecticut’s definition of an assault weapon.

After Lanza killed 20 first graders and six adults in Newtown, Connecticut beefed up its gun laws to outlaw the weapon Lanza used.