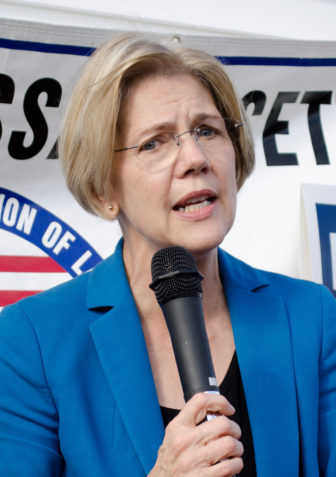 The poll found former Vice President Joseph Biden has retained his front-runner status with 32 percent of Democrats and independents who “‘lean Democratic” surveyed, but Warren’s support rose from 15 percent to 21 percent since the July 29 poll.

The Quinnipiac poll also showed that California Sen. Kamala Harris, D-Calif., whose support surged to 20 percent after the first Democratic debates last month, dropped to 7 percent after the latest set of debates.

Malloy said Warren’s “policy heavy presentation” and Biden’s “ ability to handle the heat from all corners” put those Democratic candidates on top.

The poll found that “very liberal Democrats” went 40 percent for Warren, 20 percent for Sanders, 19 percent for Biden and 7 percent for Harris, an indication Warren is eating into Biden’s progressive base of supporters.

But the poll showed Biden is also the most popular candidate among “moderate/conservative Democrats,” who went 43 percent for Biden, 11 percent for Warren, 9 percent for Sanders, and 4 percent each for Harris and Buttigieg.

Forty-nine percent of Democrats also believe Biden has the best chance of beating President Donald Trump in the general election. Twelve percent of the respondents said Sanders could beat Trump, 9 percent said Warren was the best choice to defeat the president, and 6% favored Harris.

The electability issue has split Democratic voters, the poll showed.

The poll was conducted from Aug.  1 – 5, and surveyed 807 Democrats and independent voters leaning Democratic. It has a margin of error of plus or minus 4.1 percentage points.