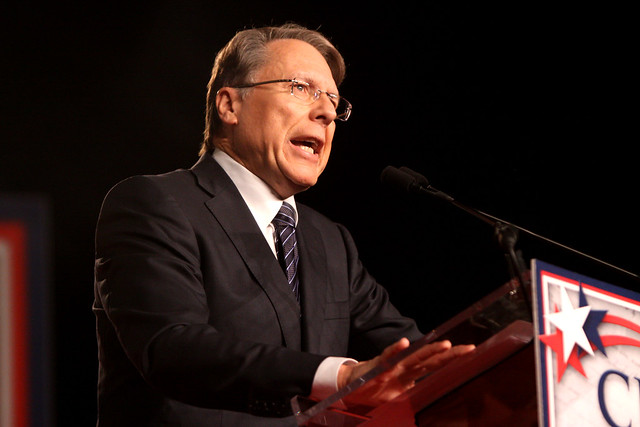 In news reports this week, the National Rifle Association’s outside counsel, William A. Brewer III, has insisted that “not a cent” of the nonprofit’s money was “ultimately spent” on a plan to buy a multimillion-dollar Dallas mansion for top executive Wayne LaPierre.

But a document obtained by ProPublica shows that NRA money was used to help facilitate the purchase of a 10,000-square-foot Texas mansion for LaPierre, setting off alarms within the nonprofit. In response to questions about the transaction, the NRA on Thursday did not provide a comment or say whether the funds were eventually returned.

NRA accountants flagged a $70,000 payment to WBB Investments LLC in a document titled “List of Top Concerns for the Audit Committee.” They asked the audit committee to examine the payment, which they said was not properly documented.

The memo warned of the payment to a company with a “vague description, company didn’t exist and address of business was the home of the Chief Accounting Officer of AcMc” — a reference to Ackerman McQueen, the NRA’s longtime advertising firm.

Ackerman has acknowledged that at the time it was helping LaPierre, who was reportedly concerned about personal security after a mass shooting in Parkland, Florida, find a safe retreat in Dallas. But the accounting record of payment to the affiliated LLC has not been previously reported.

Now, Ackerman has turned over records related to LaPierre’s house search to the New York attorney general’s office, which is investigating whether the NRA violated its tax-exempt status with lavish spending and insider deals. The Wall Street Journal first reported LaPierre’s housing plan, and attributed to an anonymous source a description of a $70,000 transfer of cash from the NRA to an unnamed limited liability company affiliated with Ackerman. Disclosure of the arrangement has escalated tensions between the NRA and the company that was once its most highly paid vendor.

For its part, the NRA maintains that Ackerman conceived and shepherded the idea to purchase the home for LaPierre and his wife, Susan. The plan, the gun group says, was ultimately rejected by the organization after its “full terms” and Ackerman’s intent to use NRA money were disclosed to LaPierre.

According to Ackerman, however, the deal originated with LaPierre. “The truth is that Mr. LaPierre decided to proactively propose his plan to leave his current residence,” the firm said in a statement issued this week. “Acting outside the parties’ Services Agreement, Mr. LaPierre sought the involvement of Ackerman McQueen.”

Emails authored by an Ackerman staffer that were described to The Washington Post demonstrate that Susan LaPierre took an active interest in the luxury home’s layout. “The men’s master bedroom and bathroom need some changes,” the email said. “There isn’t much closet space. Susan will have specific input here and can probably work with the eventual interior designer to get this accomplished.”

According to the Post, the LaPierres sought to close the real estate deal on July 1, 2018. Within the next two weeks, the NRA’s accountants produced their audit committee document flagging the $70,000 transaction.

The entry on a 2018 NRA accounting document that describes the transfer of NRA funds into an LLC. The purpose of the transaction, we now know, was to help Wayne LaPierre purchase a mansion in Dallas.

The NRA accountants did not know at the time the purpose of the $70,000 transaction. According to the document, they viewed the payment as a violation of the NRA’s “accounts payable procedures.”

The NRA and Ackerman worked closely together for almost four decades. The firm shaped the organization’s public image and devised its most memorable ad campaigns, at a cost of tens of millions of dollars annually.

In April, the gun group sued Ackerman in a Virginia state court over its billing practices, and it soon after ended its relationship with the firm. Ackerman denied the allegations, and it eventually responded with a defamation suit against the NRA. The former partners are now tied up in litigation.

Ackerman has been involved in other transactions that benefited LaPierre. In May, according to NRA records anonymously posted online, the firm paid more than half a million dollars for LaPierre’s custom suits and exotic travel.

The audit committee document was part of an effort by NRA accountants last year to address a broad array of questionable transactions and business arrangements that they believed could threaten the organization’s tax-exempt status. The deals involved top NRA executives, favored vendors and consultants. Brewer, the NRA’s outside counsel, at the time called the document “obsolete and misleading.”

This month, ProPublica reported on another document authored by a former senior employee in the NRA’s treasurer’s office. The former employee, who resigned in November, alleged that Brewer tried to impede the accountants’ work. She said that he “intimidated NRA staff and threatened our professional livelihoods,” using coercive tactics such as the compilation of “burn books,” which were filled with sensitive personal information that could be used as leverage against staffers.

Brewer and his firm denied the allegations. A firm partner told ProPublica that “the notion that our research team compiles opposition research, or ‘burn books,’ regarding clients or their employees is simply not true.”

This story first appeared in ProPublica on Aug. 8, 2019. It was produced in partnership with The Trace.