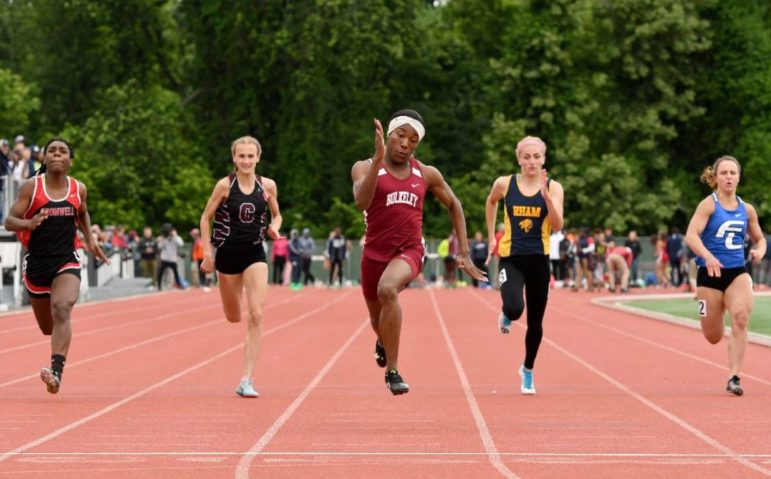 Terry Miller, now a student in Bloomfield, set records in the 100 and 200 meter races at the State Open high school boys and girls track and field championships at Veterans Stadium in New Britain in June, 2018. In the 100, Miller beat (L to R) Andraya Yearwood of Cromwell, Chelsea Mitchell of Canton, Bridget Lalonde of RHAM and Maya Mocarski of Fairfield Lu. (John Woike, Hartford Courant)

Selina Soule said Monday she is ‘grateful’ that the U.S. Department of Education’s Office of Civil Rights has agreed to investigate Connecticut’s policy that allows high school transgender athletes to compete as the gender with which they identify.

“Girls should never be simply spectators in their own sport, they deserve to compete on a level playing field,” said the Glastonbury High School athlete. “I hope that this important step will help return fairness to the sport I love, for me and for all girls who dream big.”

Soule and two other girls who were not named filed a complaint in June contending that the Connecticut Interscholastic Athletic Conference policy on transgender athlete participation violates Title IX.

In a letter to the Alliance Defending Freedom, the conservative group that filed the complaint on behalf of Soule and the two other girls, Adrienne M. Mundy-Shepard, acting regional director for the Office for Civil Rights, wrote that “opening the complaint for investigation in no way implies that OCR has made a determination on the merits of the complaint.”

The complaint argues that the girls’ Title IX rights have been violated by the CIAC policy because it pits girls against athletes who are biologically male despite their female gender identity. They contend the situation has robbed them of top finishes, the chance to compete in postseason play  and possibly college scholarships.

Christiana Holcomb, legal counsel for the Alliance, said the OCR decision to investigate is “excellent news. It’s certainly a step in the right direction. We are optimistic now that OCR has opened an investigation that it will ultimately conclude that the [CIAC] violated Title IX by allowing biological males to compete in girls athletics.”

Holcomb said, however that she wanted to clarify that at this point, all that OCR has said is that “they recognize they have jurisdiction and have opened an investigation.” 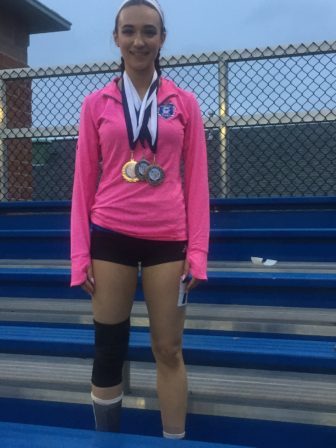 Selina Soule, one of three female athletes who have brought a Title IX complaint against the CIAC.

A statement from the CIAC said the organization is “committed to equity in providing opportunities to student athletes in Connecticut, and the CIAC will participate fully with this investigation.”

In the letter, the  OCR says it will investigate whether the CIAC and the Glastonbury Board of Education have “denied equal athletic benefits and opportunities to girls” through the transgender participation policy.

The OCR said it will also investigate whether the CIAC retaliated against one of the complainants for her advocacy against the transgender policy by informing her in March, 2019 that the CIAC’s executive director would no longer accept communications from her.

And OCR said it will look into whether the Glastonbury district “retaliated” against a student when,  the letter says,  her track coach replaced her on a sprint medley team in Feb. 2019; told her and her parents  that he could not give a good report to college coaches about her; and denied her a position as a team captain.

Glastonbury Superintendent Alan Bookman said of the investigation: “We’re obviously going to defend our position. We feel we’ve done everything correctly and that’s out job to show that to the Office of Civil Rights.”

Dan Barrett, legal director for the American Civil Liberties Union of Connecticut, which has helped the transgender athletes, Andraya Yearwood of Cromwell and Terry Miller of Bloomfield, get their message out, said “Efforts to undermine Title IX by claiming it doesn’t apply to a subset of girls will ultimately hurt all students.

“Girls who are transgender are girls. The Trump administration – from the Office of Civil Rights to the Supreme Court – is systematically trying to roll back rights for transgender people in all aspects of life,” Barrett continued.  “We will fight to defend transgender people across the country, including in sports. Connecticut’s policy of allowing all girls, including transgender girls, to run on the girls team remains unchanged.“

With the CIAC policy in play, Yearwood and Miller have won multiple championships, with Miller shattering state records in recent years and winning the Hartford Courant’s girls’ indoor track and field athlete of the year award this year.

There is no time frame on when OCR will complete its investigation.