Merrill will push for updating the state's elections hardware 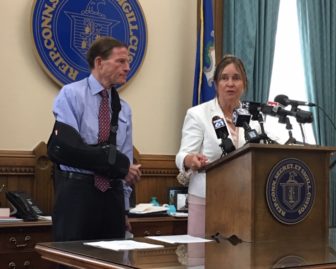 Connecticut’s current system of casting and counting votes has its roots in the chaotic presidential election of 2000. With the winner unclear for a month, it was a frightening moment in U.S. politics that led to a bipartisan consensus about the need to maintain confidence in the integrity of elections.

Passage of the federal Help Americans Vote Act in 2002 established broad standards for the conduct of elections and provided funding for new hardware, leading Connecticut in 2006 to abandon its old mechanical lever voting machines for a mix of the old and new — paper ballots counted by computer-driven tabulators.

“We fortunately made the right choice,” Secretary of the State Denise Merrill said Wednesday.

But as Merrill and U.S. Sen. Richard Blumenthal made clear Wednesday at a press conference on elections security, the technical and political challenges in protecting U.S. elections are far more complex today than in the aftermath of the Florida recount in the Bush-Gore campaign of 2000. Blumenthal arrived at Merrill’s State Capitol office with his right arm in a sling. He had surgery last week for a torn rotator cuff.

Blumenthal and Merrill, both Democrats, assailed the U.S. Senate Majority Leader Mitch McConnell, R-Ky., for blocking a vote on one Blumenthal elections proposal — one of several on elections security he has declined to move. Their press conference was partisan, even though one element was Merrill’s call for a non-partisan measure: Planning for another overhaul of vote-counting in Connecticut, hopefully with federal guidance and funding.

Connecticut’s electronic tabulators no longer are manufactured, making maintenance a challenge. They were first used here in 2007 and have been the standard for more than a decade, an extraordinarily long time in any device that relies on computer technology, Merrill said.

“They are coming to the end of their useful life,” Merrill said.

Once confined to relatively mundane matters of voting-machine reliability and ballot clarity, the issue of elections integrity now turns on the ability to defeat computer hackers and neutralize social-media disinformation campaigns like the one that national-security officials say was waged by Russia in 2016.

“Let’s be absolutely and abundantly clear: The Russians attacked this nation in 2016 in a systematic and sweeping way. That’s the characterization of the special counsel,” Blumenthal said, referring to Robert Mueller’s recent testimony before Congress.

“I do believe, as many people do, that the real target is the trust of the American people in their elections,” Merrill said.

Merrill said she will be testifying Thursday in Washington before the federal Elections Assistance Commission, which is working on new standards for elections infrastructure in the wake of computer attacks on various state elections systems.

Connecticut’s decentralized elections system is relatively safe: Its tabulating system is off line and theoretically protected against hacking, though the computer chips used to program the tabulators could be compromised. Connecticut defends against that possibility with pre-election inspections of the chips and post-election audits.

A Senate bill would provide $380 million in funding for upgraded elections infrastructure, while a House version would provide $1 billion, Blumenthal said. He sees both as inadequate. “We’re investing in the fundamental underpinnings of our democracy,” he said.

More controversial have been bills addressing the question of foreign interference.

In an interview with George Stephanopolous on ABC in June, Trump said he saw no obligation on the part of his campaign or any candidate to do so. Trump initially said he would accept such information if offered in 2020.

He walked back the comment a few days later on Fox.

Blumenthal said McConnell is blocking a vote on the Duty to Report Act, even though it appears to have widespread support.

Another bill supported by Blumenthal would require on-line political ads in federal races to disclose who had had placed them, as is the case with most other political advertising. Connecticut already has such a requirement in state races.