A mortgage company goes to war with Connecticut regulators 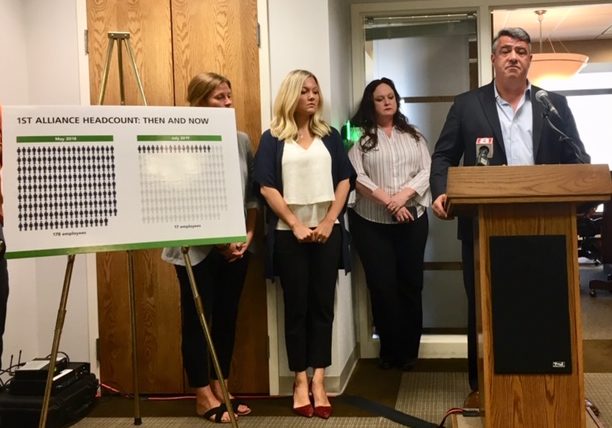 John DiIorio and some of his remaining employees. The chart shows his workforce at its height and its present 17 workers.

East Hartford — No one has ever fought an enforcement action by the state Department of Banking quite like John DiIorio. He is the founder and chief executive of 1st Alliance Lending, a mortgage lender whose rapid growth was aided by one state agency, the Department of Economic and Community Development, as it did battle with another.

Accused by banking regulators of improperly using unlicensed call-center employees to help negotiate loans, 1st Alliance not only has defended itself with lawyers, but the company has waged a campaign managed by one of Connecticut’s leading political operatives, Roy Occhiogrosso.

Occhiogrosso, who was a senior strategist to Gov. Dannel P. Malloy’s campaigns for governor and briefly served in his administration, was hired in August 2018, three months after the department opened an investigation.

He succeeded in getting DiIorio a meeting with Malloy and the governor’s chief of staff, Brian Durand, though Malloy declined to intervene after being briefed on the case by Jorge Perez, the commissioner of banking. Perez was reappointed this year by Malloy’s successor, Gov. Ned Lamont.

The unusually bitter and public battle is providing a rare, if largely one-sided, view of what it’s like to fall into the cross hairs of state regulators. And it poses a challenge to the administration of Lamont, who has promised to make Connecticut a friendlier state for businesses.

The state began an audit of 1st Alliance in May 2018 and put the East Hartford company on notice in December that it would seek a suspension of its license to do business over what it saw as potential violations of state and federal banking rules. Its license was automatically suspended on July 31 after an insurer revoked its surety bond — an act DiIorio says was prompted by the investigation.

On Thursday, DiIorio held a press conference accusing Perez and the Department of Banking of using regulatory overreach to unfairly challenge the company’s business model, which relies on unlicensed “home loan consultants” to make the initial contact with potential customers, rather than licensed mortgage loan officers.

One of DiIorio’s claims is that the agency not only is misinterpreting federal lending rules adopted after the financial collapse of 2008, but it is improperly influencing regulators in other states to take similar action. To prove its case, DiIorio has filed a freedom of information request seeking copies of communications with other states.

He was surrounded Thursday by 17 remaining employees, down from a high of nearly 170. One round of layoffs was due to the company’s mismanagement of growth that came too quickly, but he attributed the majority of the job losses to 1st Alliance’s protracted fight with Banking and the agency’s interference with its ability to do business in other states.

DiIorio has declined to accept the terms of a consent decree offered by the Banking Department, which he says called for payment of a $250,000 fine, accepting Connecticut’s interpretation of lending rules for its operations in 45 other states, and a “gag order.”

(Speaking generally, the department says it does not seek gag orders in consent decrees, other than a promise not to publicly disavow their contents.)

DiIorio said he has little hopes of a positive outcome at an administrative hearing in September. A hearing officer will preside, but Perez will have the final say over what action is taken by the department.

Matt Smith, a spokesman for the department, declined to comment on the specifics of the 1st Alliance investigation, instead broadly defending the agency in its approach to the dual roles of regulator and promoter of banking services in Connecticut.

“As a regulator, the Connecticut Department of Banking has the dual task of ensuring a healthy financial services sector while protecting the hardworking families of Connecticut,” Smith said. “The department never looks to limit access and choices for consumers. It is the department’s goal to apply the law equitably to all regulated entities so they have the opportunity to thrive and prosper here in Connecticut.”

Smith said the department continues to seek “a fair resolution of the allegations against 1st Alliance, but must ensure that companies doing business in Connecticut play by the same rules.”

In 2016, the state Department of Economic and Community Development offered 1st Alliance a $10 million aid package geared to adding 168 employees and relocating to an industrial site in Putnam. The package included $6 million in low-interest, forgivable loans and $4 million in tax credits.

DECD disbursed $3.5 million in January 2017. But 1st Alliance renegotiated in October 2018 after abandoning plans to move to Putnam. DECD said the company repaid $2 million and forfeited any claim on the tax credits.

The Department of Banking had begun an investigation of 1st Alliance in May 2018, acting on a whistleblower complaint by an employee who has not been identified. From the start, DiIorio said, the approach was hostile and the questions to employees were leading, seeming aimed at confirming a tip and not assessing its business.

DiIorio said he understands why Malloy and Lamont declined to intervene, given the political and even legal risks. But he said it would have been appropriate, given what he says was abuse by “an out-of-control bureaucracy.” He said he was asking them to “obstruct injustice,” not justice.

One former state official who declined to be quoted by name said commissioners answer to governors, but no governor should interfere in regulatory cases where the commissioners effective act as judges.

Dan Esty, who was the commissioner of energy and environmental protection under Malloy, said the governor had a clear sense of when it was appropriate to push back at the state bureaucracy. He didn’t intervene in specific enforcement or permit cases, but he would ask questions about agency processes.

Esty said the agency was continually under fire from the owners of waterfront property who wanted expedited permits to put docks in the water. Some tried to involve the governor’s office.

Malloy never intervened on a single permit application, but he did push the department to streamline a process that he saw as too cumbersome, Esty said.

“I found that to be a totally appropriate intervention by the governor,” Esty said. The timeline for getting a decision on a permit was cut by three-quarters, he said.

Max Reiss, the communication director for Lamont, said the governor has confidence in his commissioners to fairly enforce state laws and regulations.

DiIorio appears to be alone among lenders in his fight with Connecticut over the question of how much work an unlicensed worker can do on a loan application. He said that was because his business model was unique, relying on unlicensed loan officials to evaluate initial applications.

Correction: As originally posted, the story said that Commissioner Jorge Perez will preside over the hearing. Perez is the final authority as to what action will be taken by the department, but a hearing officer will preside.