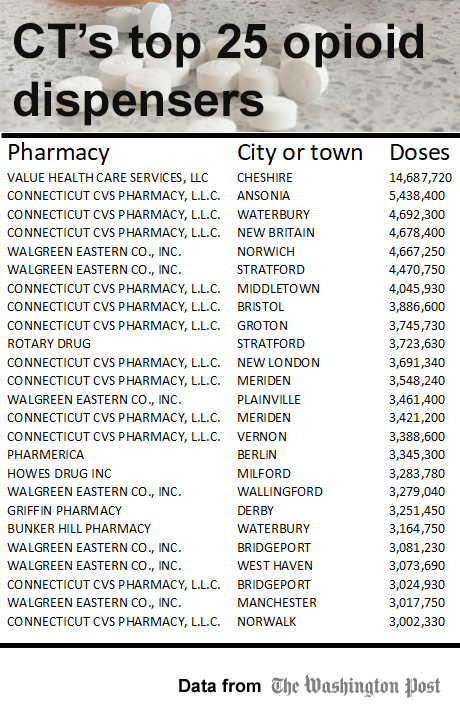 As the opioid epidemic flourished across America between 2006 and 2012, Connecticut’s pharmacies dispensed more than 675 million opioid-based pills.

Those are the findings of a database maintained by the Drug Enforcement Administration that tracks the path of every single pain pill manufactured in the United States.

The database was obtained by the The Washington Post, which battled the DEA and the Justice Department in court to obtain the information.

It showed the volume of pills dispensed climbing as the opioid epidemic surged, increasing 51 percent from 8.4 billion in 2006 to 12.6 billion in 2012. By contrast, doses of morphine, a well-known treatment for severe pain, averaged slightly more than 500 million a year during the same period.

In Connecticut, the pharmacy that handled the most pills in that seven-year period – about 14.7 million of them – was Value Health Care Services, or Omnicare of Connecticut, in Cheshire. That translates into 168 pills per year for each of the 12,465 people who live within five miles of the pharmacy, the database says.

Omnicare merged with CVS in 2015, part of a consolidation in the pharmacy business, and its manager referred questions about its prescribing practices to a corporate spokesman.

CVS spokesman Mike DeAngelis said “pharmacies do not promote or otherwise create demand for prescription opioid medications. They fill prescriptions for FDA-approved medications that are written by licensed physicians for their patients,” he said. “Doctors have the primary responsibility to make sure the opioid prescriptions they write are for a legitimate purpose.”

Many of the top dispensers of opioids were linked to hospitals or long-term care facilities.

“An Omnicare pharmacy typically has a larger scale of business than a retail pharmacy due to the number of patients being served by its clients,” DeAngelis said.

But it was the large chain drug stores that dominated the list of those with outsized volumes.

CVS accounted for 12 of the top 25 pharmacies that received the greatest number of opioid pills in the seven-year time frame, including a store in Ansonia that received more than 5.4 million pills between 2006 and 2012. That’s about 24 pills each year for each of the 32,046 people who live within five miles of that pharmacy.

“Walgreens pharmacists are highly trained professionals committed to dispensing legitimate prescriptions that meet the needs of our,” said spokesman Phil Caruso. He also said Walgreen’s “has been an industry leader” in combating the opioid crisis in communities where its pharmacists live and work.

The opioid epidemic began with prescription pills. When those pills became too expensive or difficult to obtain, many addicted to opioids turned toward heroin, which led to the nation’s current fentanyl crisis.

The Centers for Disease Control says that from 1999 to 2017, more than 702,000 people have died from a drug overdose. Of those deaths, nearly 68 percent involved a prescription or illicit opioid, the CDC says.

The National Institute of Drug Abuse says that in 2017, there were 955 overdose deaths involving opioids in Connecticut — a rate of 27.7 deaths per 100,000 persons.

But while Connecticut is suffering along with the rest of the nation from the opioid crisis, the DEA databases showed far fewer pills flowing into Connecticut than other states. It showed the states that received the highest concentrations of pills per person per year were: West Virginia with 66.5, Kentucky with 63.3, South Carolina with 58, Tennessee with 57.7 and Nevada with 54.7.

In contrast, Connecticut’s concentration of pills per person was about 28 pills a year. 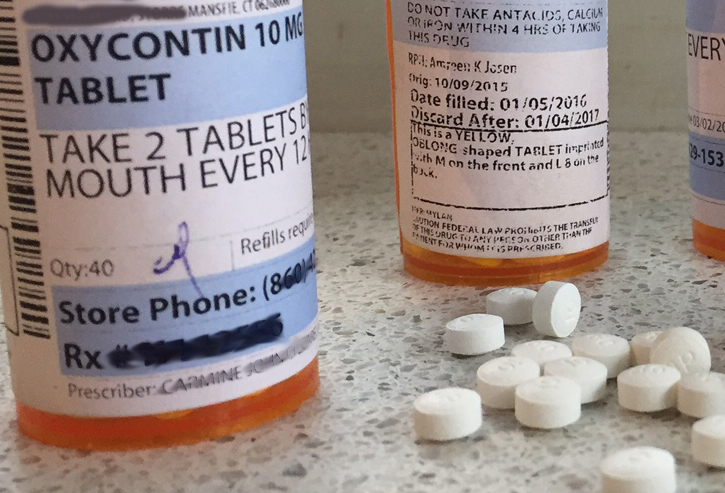 Because it may provide more anonymity,  opioid abusers often to go to large chain pharmacies to fill multiple prescriptions culled from visits to various doctors for the same ailment, a practice known as “doctor shopping.”

But there were a number of smaller, independent pharmacies on the list of the top opioid pill recipients in Connecticut.

Bhavesh Patel, Howes Drugs’ latest owner, said the person who purchased the facility in 2012 implemented a strict procedure for its pharmacists to fill opioid prescriptions, procedures that were continued when he purchased the business in 2017.

Several pharmacists contacted for this story said the state was slow to implement a drug monitoring program that could have helped fight opioid abuse.

Connecticut’s Prescription Monitoring Program, run by the state Department of Consumer Protection, was established in 2008 by a law passed by the General Assembly to give doctors a complete picture of a patient’s controlled substance use, including prescriptions by other providers, so that the physician can properly manage the patient’s treatment.

The information culled from the DEA database is welcomed, said LoraRae Anderson, spokeswoman for the Connecticut Department of Consumer Protection.

“The information provided in reports like these is always helpful for us as we work with our partners to make sure that the right medication is used in the right circumstances for patients based on the professional judgment of prescribers in our state,” she said.

“This data doesn’t surprise me because there was an insane amount of marketing and a deliberate attempt to hook America on these deadly drugs that got us into this mess in the first place,” he said. “And now we’re trying to play catch up to get out of it.”