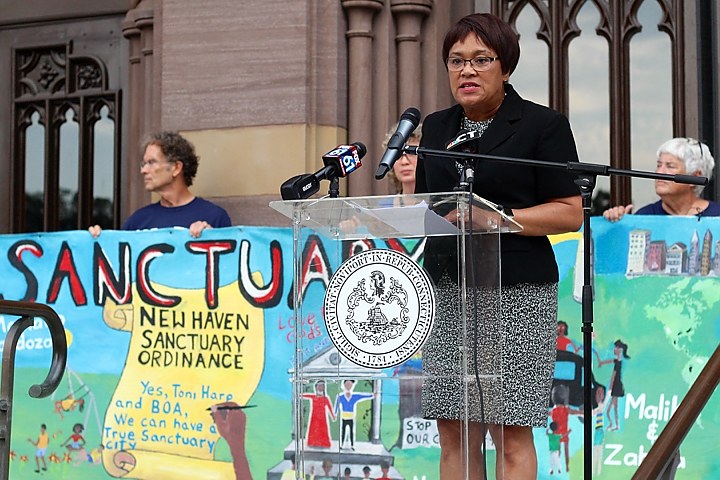 Mayor Toni Harp announces her executive order at a rally.

A month after immigration activists heckled her at a rally, New Haven Mayor Toni Harp surprised them last week by announcing a new sanctuary-style executive order to protect the legal rights of the undocumented.

Activists praised the move — and called on the Board of Alders to take the next step by passing a law to make official New Haven’s status as a “sanctuary city.”

Harp announced the executive order on City Hall’s steps last Wednesday evening, in front of nearly 150 sign-carrying protesters who’d turned out for a rally organized by Unidad Latina en Acción (ULA) and New Haven Rising to call on the Board of Alders to pass the proposal to formally define New Haven as a “sanctuary city.”

Under the proposed legislation that alders are expected to take up soon, New Haven’s approach would be “Don’t Ask, Don’t Tell, Don’t Arrest.”

Policies already require cops and teachers to follow most of those rules. Harp’s new executive order extends them to the rest of city government.

The executive order says no city employee can ask about a person’s immigration status unless required by law; can use city resources to assist in registering individuals on the basis of their national origin or other demographics; nor can disclose confidential info, including receipt of public assistance or immigration status, without the person’s approval, authorization by another law or a separate investigation into crime or terrorism.

The executive order also forbids cops, school resource officers and security guards from asking crime victims about their immigration status, from detaining a person solely for living here without authorization, and from keeping a person in jail just based on a request from ICE.

Any alleged violations must be investigated by the human resources director within 90 days and can result in disciplinary action. 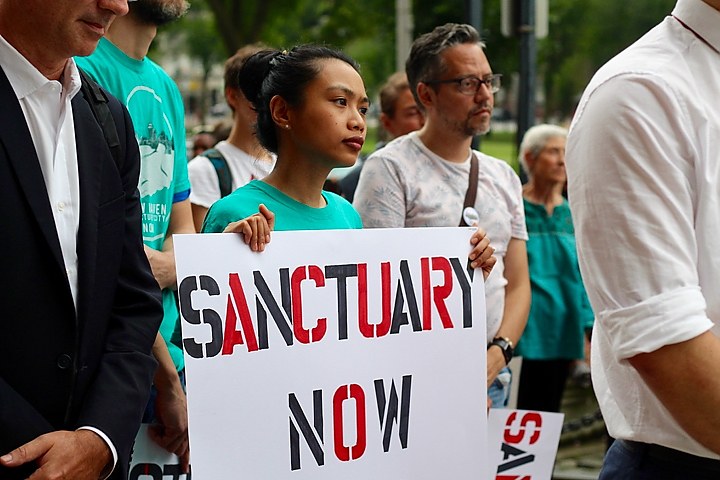 But it does all that without officially deeming New Haven a “sanctuary city” — a term that the mayor’s spokesperson said comes with too many negative connotations, but that immigration advocates say would be a powerful symbol to those living in fear of deportation.

Harp has consistently defended the city’s “sanctuary” status. She carefully avoided using the term on Wednesday. She called the event a “unity rally,” referred to the city as a “haven” offering “refuge” in her speech, and titled the executive order “Concerning Undocumented Immigrants.”

In the end, she stopped short of backing the “sanctuary city” ordinance, saying she’d leave it up to alders to decide what to do.

“This is also a call for us to do better,” Jesus Morales Sanchez, an organizer with the Connecticut Immigrant Rights Alliance, said at the rally. “Whether you are an immigrant, a child of immigrants, whether you’ve been here for countless generations, it is the moment to stand together and keep fighting. Because we know that the fight is far from over and the fight is evolving.”

Afterwards, he said Harp’s executive order came as “a little bit of a surprise.” He called it a “bold” first step that shows City Hall is listening.

“Hopefully,” he added, “this means that we’re going to be working together so that we can really strengthen the sanctuary policy so we can create permanent change for the New Haven community, right now and for generations to come.”

What’s In A Name?

What exactly is a “sanctuary city?” There’s no legal definition, but the term is generally understood to be anywhere that prohibits their employees from asking about immigration status and keeping detainees in lockup any longer than required.

Mayors in “sanctuary cities” say those policies comply with federal law. They say they will turn over undocumented immigrants who’ve committed crimes if the situation is serious enough for federal agents to have obtained a warrant. But short of that, they say they don’t want to see local employees deputized to enforce federal immigration laws. 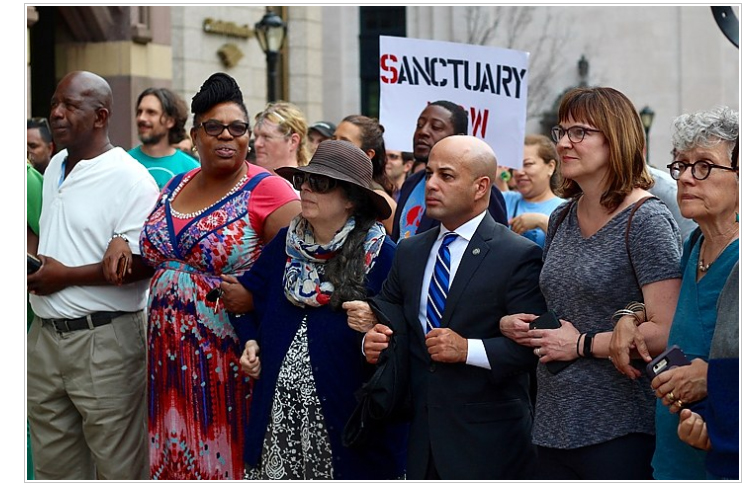 That’s pretty much exactly what Mayor Harp mandated throughout city government this week.

That all builds on 13 years of city policies designed to protect immigrants, including a first-in-the-nation municipal ID card, that had been pushed for by organizations like JUNTA for Progressive Action, ULA and St. Rose of Lima Church and that made the city a target for a retaliatory raid in 2007.

Especially since Donald Trump’s election, Mayor Harp herself has repeatedly called New Haven a sanctuary city. She’s affirmed those protections on the campaign trail, repeatedly shown up for immigrants who’ve claimed sanctuary in city churches, and refused to back down to Republican attacks, including from the president himself.

Harp had been noncommital to the idea of codifying a 2006 general order for the police department and a 2017 policy for the school system into an ordinance.

So far, that might’ve kept New Haven from showing up in recent lists of “sanctuary” jurisdictions that Trump illegally tried to cut off from federal grants.

For instance, one map compiled from Immigration and Customs Enforcement documents by The Center for Immigration Studies, a restrictionist group that wants to see less immigration, identified Hartford and East Haven as “sanctuary cities,” while skipping over Bridgeport, which describes itself as a “compassionate city,” and New Haven.

Immigration activists argued the city can do more.

“Now, more than 10 years later, we’ve learned from the experience of other states and cities around the country that have taken the ideas and policies that began right here on these steps, expanded on them and tested them and worked with them. We’ve found there are things we can do here to update and improve our policies. They were great 2007 policies, but now it’s time for 2019 policies,” said Michael Wishnie, a professor at Yale Law School who co-leads a clinic on workers and immigrants rights.

“Mayor Harp, thank you for the courage and leadership of the executive order that you’ve just announced,” he added. “Board of Alders, it’s over to you. It’s time to codify this law so that it cannot be changed by the stroke of a pen by a new police chief or new mayor when that time comes. It’s time to make this the law of our city.”

Since 2006, said John Lugo, an organizer with ULA, they’ve argued that an official designation would let immigrants know they’re going to be safe in the Elm City, regardless of who occupies the mayor’s office. And they argue that past reforms are now outdated, especially in terms of accountability for violations.

As Fatima Rojas, a volunteer with ULA, put it recently, “New Haven is a sanctuary city in culture, in enforcement, but not in law.”

At a rally earlier this summer, after Trump threatened a weekend of immigration raids, activists interrupted Harp during her speech over the issue. “What do we want? A real sanctuary ordinance,” they chanted. “When do we want it? Now.”

Harp responded that an ordinance would need to go through the Board of Alders, but she pledged to “work with you to work with them to get it to happen.” Later, she added, “We have been a sanctuary city for years and I have supported it from the start.” 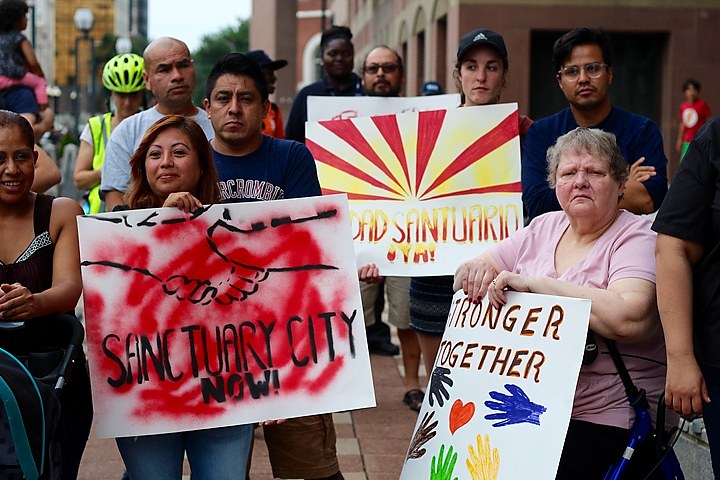 More demonstrators at the rally.

A month and a half later, Harp announced the citywide executive order, which her spokesperson, Laurence Grotheer, said the mayor had been motivated to issue by the “continuing deterioration of the national climate.”

In her speech on last Wednesday, Harp continued to leave the ordinance question up to alders.

Lugo called the executive order is an “important step” to put protections for undocumented immigrants in place now, because it’s unclear how long drafting the legislation will take. But they urged the city’s lawmakers not to make any compromises in declaring New Haven a “sanctuary city.”

“As a person of faith, as people of goodwill, as neighbors to one another, we have no business being neutral on white supremacy,” said First & Summerfield Pastor Vicki Flippin. “Our business must be nothing less than actively and vigorously resisting white supremacy. Sanctuary is the refusal to cooperate with evil.”

Whatever alders decide, the city’s ability to halt deportations within its borders is limited. It can’t stop ICE agents from driving through Fair Haven, arranging a pick-up with Superior Court prosecutors, or stopping by the state-run New Haven Correctional Center on Whalley Avenue.

Since 2017, ICE has sent only 43 detainer requests directly to the New Haven Police Department, according to data collected by Syracuse University’s Transactional Records Access Clearinghouse.

Maybe most importantly, the law only applies within city limits. Several undocumented New Haven residents said they’d initially been arrested in nearby towns, like for driving without a license in Milford.

An update to Connecticut’s Trust Act, sponsored by State Sen. Gary Winfield, should close some of the loopholes that allowed police officers, state troopers and judicial marshals to turn residents over to ICE.

“I’m very excited about the mayor’s plan for the executive order and the process for the Board of Alders, but I want to let you know that those things exist only on paper, and paper is no good unless there’s human bodies willing to do what we’re here to do today,” he said. “Today is the day that we come together, that we fight to make sure that families are together.”

Chants of ‘No justice, no peace’ and no traffic moving on I-95

“It’s not every day we take over a highway, you know," one protester said. "It makes you want to cry."

People throughout Connecticut protest the death of George Floyd

Protesters in Hartford, New Haven, Bridgeport, New London, and other parts of Connecticut joined a nationwide call for action Saturday following the death of George Floyd in Minneapolis police custody.

Newly released data provides the most comprehensive look yet at how the virus has affected the state's courts and prisons.