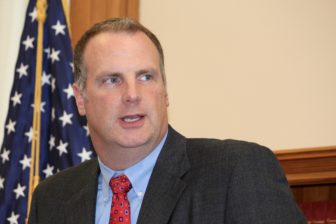 Editor’s Note: Some of the data contained in this story was incorrect, due to an analysis error by CCM. An updated story on the report can be found here.

Nearly 60% of Connecticut cities and towns increased property taxes this fiscal year, with most of those tax hikes outpacing the rate of inflation, according to a new analysis.

The Connecticut Conference of Municipalities also reported Monday that the property tax burden per capita in this state is nearly twice the U.S. average and third-highest in the nation.

CCM reviewed tax rates in all 169 cities and towns, conducting separate analyses for communities that underwent property revaluation and for those that did not. The process of revaluation, which is periodically required by state law, can lead to lower property tax rates even if owners end up paying more in taxes.

The group found 91 out of 154 municipalities that did not undertake revaluation increased property taxes this year, a ratio of 59%. And of those 91 communities, 70 approved increases greater than 1.6%, topping the latest inflation rate for Connecticut.

“The need for adequate state aid to achieve significant property tax relief — along with other diversified local revenue sources and greater authority to contain local costs — is undeniable,” said CCM Executive Director Joe DeLong. “Nearly 100 towns and cities were forced to increase their property tax rates because of cuts in some state aid programs, and in spite of sustained state aid in others areas for local governments.”

CCM and other municipal advocates have argued for decades that Connecticut’s reliance on the local property tax is undermining economic growth and overburdening low- and middle-income households.

State efforts to reverse this trend also have bogged down , particularly since the last recession, as governors and legislators grapple with surging pension and debt costs accumulated over more than seven decades.

For example, two separate initiatives to share state sales tax receipts with cities and towns haven’t met legislators’ goals. One enacted in 2011 was reversed within two years. A second, adopted in 2015, has been scaled back dramatically.

Education aid for local school districts has increased. For example, the Education Cost Sharing grant is projected to grow by $116 million by the 2020-21 fiscal year.

But over the past decade, key non-education grants that help communities that host large amounts of tax-exempt property — colleges, hospitals and state buildings — have been reduced or have not kept pace with inflation.

Gov. Ned Lamont pledged during the 2018 campaign to expand property tax relief for low- and middle-income households starting with his first budget.

Lamont and legislators opted not to restore that tax break and instead closed a projected state budget deficit without increasing income tax rates.

“We share the concerns of the municipalities and their representatives, which is why Governor Lamont continues to seek solutions that will lessen the property tax burden and stabilize municipal finances, just as he did this year when he engaged with local leaders throughout the legislative session,” said Max Reiss, Lamont’s communications director.

Reiss added that “Governor Lamont is always looking to run government in the most effective and efficient way from the state level down the local level,” “With cost-saving efficiencies, such as the centralization of human resources and new Microsoft licensing, we are able to trim the state’s operating costs and maintain support for our municipalities.”

The CCM study also found that local property taxes now generate more than $11 billion per year statewide, an increase of about $500 million since 2017, according to CCM. That’s also slightly more than the $10.8 billion the state income tax raised in 2018.

Norfolk, Bethlehem and Weston were the only communities with double-digit increases, boosting property taxes by 14.5 %, 10.9 % and 10.1 %, respectively.

All but five of the reductions were less than 5%. The largest decline — and the only one in double digits — was Killingly’s 10.1% property tax cut.

“Some enhanced state aid enacted over the last several state legislative sessions has enabled some already high-tax communities to hold the line on property tax increases, or in some towns, to actually reduce taxes,” DeLong said. “Despite this, some communities still have extraordinarily high property tax rates.”