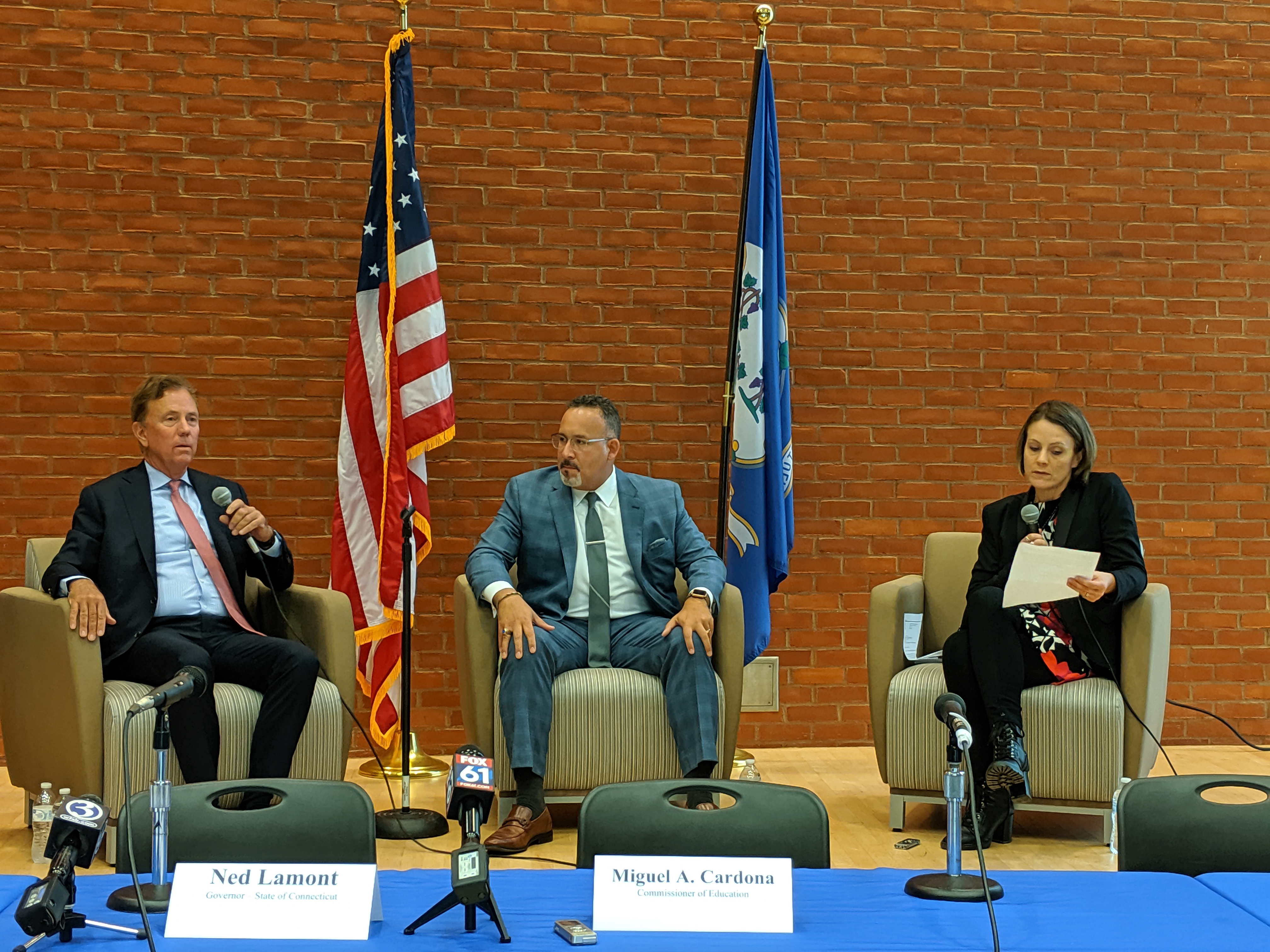 “Florida has sunshine, Texas has oil,” Lamont told the dozens of education leaders and advocates gathered at Wilcox Technical High School — Cardona’s alma mater. “You go with what your strengths are. In Connecticut, our strength has always been an amazing school system.”

Education, Lamont said, is about “about making sure you’re prepared for a 21st century economy, but it’s also about good people and good citizens and educating the whole person and making you enthusiastic about learning in a great local school where the community can be involved.”

Several of the education leaders in attendance Tuesday said while they agree with the governor’s broader vision, they didn’t hear much that was new and they hope to eventually get more specifics on his plan to improve Connecticut’s schools.

“I heard the governor reiterate much of what he said when he was running for governor,” said Fran Rabinowitz, executive director of the Connecticut Association for Public School Superintendents. “I’m really hopeful that we’ll get together to plan the specifics as soon as possible.”

Robert Rader, executive director of the Connecticut Association of Boards of Education, said he thought “it was very nice to get everybody together,” but he had hoped there would be “sort of a call to work together on these issues in some framework.”

“I would use the word platitudes,” Lavielle said.  “It was very nice, but I didn’t hear anything new.”

Lamont and Cardona took turns answering questions from Christine Stuart, editor of CT News Junkie, who raised topics ranging from the achievement gap, to the state’s efforts to prepare students for careers, to the future of regionalization.

Cardona said the achievement gap can only be closed if all districts have a “viable, quality curriculum” and teachers are given the tools to address the more complex needs of their students.

“We need to raise the bar, we need to make sure that we have high expectations for kids,” Cardona said, adding that educators must partner with social service agencies.

“Kids can’t learn if they are hungry,” he said.

Lamont was questioned about two controversial topics — school regionalization and the public-private partnership administering the $100 million grant from Dalio Philanthropies to improve education, which will be matched $100 million in state funds, that is not subject to the state’s Freedom of Information laws. Lawmakers exempted the panel overseeing those funds from key ethics and disclosure rules in the final days of the legislative session.

Lamont said the process will be transparent, but he offered no specifics about how that will happen.

“You’ll know everything going on there,” Lamont said.

Asked about the importance of desegregating schools, he said, “My first priority is to have great local schools where the community can be involved.”

Stuart asked Lamont if he was considering another proposal on school regionalization — which he abandoned after hundreds of residents opposed it during the legislative session.

“I think I learned a little bit on that one and the politicians really had fun,” Lamont said.

Talking with reporters after the meeting, Lamont said he is still interested in seeing if communities can share back office services to cut down on expense.

“I’m not sure why the governor’s got to be involved in that at all,” Lamont said. “I think the local mayor or first selectman who wants to hold down property taxes and say we’re doing better by our students would do this on their own.”

But he said he would make sure that government gets out of the way, to make such cooperative efforts easier. 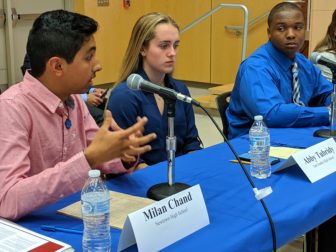 Lamont and Cardona also heard from students at the meeting.

Milan Chand, a student from Newtown High School, said that one of the biggest factors affecting students is “definitely mental health, gun violence, bullying. I see it in my community and other communities. So many students are dealing with countless different psychiatric disorders. It’s affecting not only their school performance, but their social life, their interactions with teachers and students and how they engage in their communities.”

He said that new programs have to be developed to help students, perhaps incorporating peers in the process, because some students aren’t willing to go to adults.

Cardona said he agrees that peer relationships could be helpful, and that efforts should be made to provide supports for teachers and to partner with agencies that can help.

Eugene Bertrand, a senior at Wilcox, said the high school has only two African American teachers and he believes that if there were more minority teachers, “it would help students take more from the classroom.”

Cardona, who has said he was the only Latino student in some of his college preparatory classes when he studied at Wilcox, commended Bertrand for bringing this up.

“I was where you are now, I get it, I totally get it,” Cardona said, adding that the state must “double down” on recruiting minority teachers.