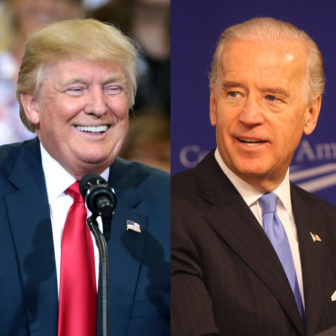 Latest Q-poll, shows Biden, and other top Democrats, would beat Trump if election were held today.

Washington – A Quinnipiac poll released Wednesday shows former Vice President Joe Biden enjoys a substantial lead over his Democratic rivals for the White House, despite Biden’s recent gaffes, while another poll finds that he and two other Democrats are in a statistical dead heat

The poll, conducted from Aug. 21 to Aug. 26, also showed that, if the 2020 presidential election were held today, 54% of registered voters say that they would vote for Biden, while only 38% would vote to re-elect President Donald Trump.

The poll also shows that Vermont Sen. Bernie Sanders would also beat Trump 53-39%; Massachusetts Sen. Elizabeth Warren was ahead of Trump 52-40%; and California Sen. Kamal a Harris would beat Trump 51-40%.

“In hypothetical matchups between President Trump and the top five Democratic presidential candidates, one key number is 40,” said Quinnipiac University Polling analyst Mary Snow. “It’s the ceiling of support for Trump, no matter the candidate. It hovers close to his job approval rating, which has stayed in a tight range since being elected.”

Quinnipiac pollsters also said the race for the 2020 Democratic presidential nomination has remained steady, with little to no movement since the last time the university conducted a similar survey, in early August.

The university’s latest poll shows Biden leading the pack with the support of 32% of Democratic voters and independent voters who “lean Democratic,” followed by Warren at 19%, Sanders with 15%, Harris with 7%, and Buttigieg at 5%. Entrepreneur Andrew Yang received the support of 3% of those polled, and no other candidate topped 1%.

The Quinnipiac poll’s findings are similar to the average results determined by Real Clear Politics of eight recent polls on the Democratic race for the party’s presidential nominee.

A recent Monmouth University poll showed support for Biden plunging and indicated the race for the Democratic nomination may be tightening.

That poll, considered by many an outlier, especially after the results of the latest Quinnipiac poll, showed Biden, Sanders and Warren in a statistical dead heat and touched off speculation that Biden’s recent gaffes has hurt the former vice president.

“What’s not to like about Vermont?” Biden asked on Saturday — at a campaign stop in New Hampshire.

Biden has also recently confused Burlington, Iowa, with Burlington, Vermont, and said last week that “Bobby Kennedy and Dr. King had been assassinated in the ’70s, the late ’70s, when I got engaged.”

The assassinations occurred a decade earlier, in the late 1960s.

Biden also recently said “poor kids are just as bright and just as talented as white kids,” and told a crowd at the Iowa State Fair “we choose truth over facts!”

The Quinnipiac poll also showed that approval of Trump’s handling of the economy is split, with 46% of those polled approving and 49% disapproving.

“On his handling of other issues, the president is decidedly under water,” the poll said.

The latest Quinnipiac poll surveyed 1,422 self-identified registered voters nationwide and had a margin of error of plus or minus 3.1 percentage points.  The survey included 648 Democratic voters and independent voters who lean Democratic .