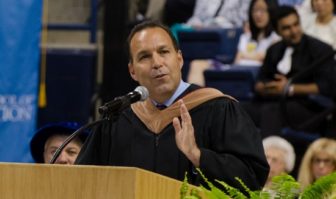 Daniel Toscano ’87 (BUS) gives the keynote address at the School of Business Commencement ceremony held at Gampel Pavilion on May 12, 2013.

Dan Toscano, a Darien financier and longtime financial supporter of the University of Connecticut, has been chosen by Gov. Ned Lamont as the new chairman of the UConn Board of Trustees.

Toscano, who graduated from UConn in 1987 and currently has a son enrolled there, is the former head of the UConn Foundation Board of Directors and has been a long time donor to the university.

He served on the search committee that recently selected Thomas Katsouleas as UConn’s new president and is managing director of global leveraged finance at Morgan Stanley Co., Inc.

“A graduate of UConn himself, Dan has gone on to have an incredibly successful business career, helping manage one of the world’s largest financial services firms, all while continuing to maintain strong connections to his home state of Connecticut and his alma mater,” Lamont said Thursday in a statement. “Importantly, Dan’s leadership will not only come from the perspective of a business leader and alumnus, but he will also provide the board with the much-needed voice of a parent who has a teenager currently enrolled at UConn.”

Toscano said he is “humbled and excited” to join the trustees.

“As Connecticut’s flagship university and a top research institution, UConn has the opportunity to play a pivotal role in the economic recovery of Connecticut. UConn has begun to show its full potential over the past decade and the state has chosen wisely to invest in a top 25 public research university. “UConn produces high-caliber graduates at all levels and is capable of attracting research funding that drives considerable economic development on its campuses. As my alma mater, I have incredible passion for the potential of UConn to rise to ever-greater heights.”

His appointment ends four months of uncertainty about who Lamont would pick to lead the board of the state’s flagship university, which recently welcomed Katsouleas as UConn’s new president. Thomas E. Kruger resigned in April as chair once it became clear that Lamont wanted new leadership.

Kruger had publicly promoted Shari Cantor, a board member and West Hartford mayor, as a successor, a move that was seen as much as a criticism of Thomas D. Ritter, the former House speaker who is the vice chair. Without mentioning Ritter, Kruger described Cantor as “a unifying, non-polarizing force on the board.”

Soon after Kruger resigned, Paul Mounds, Lamont’s chief operating officer said the governor will be looking for a new chairman who  “bleeds blue and someone in line with the governor’s vision of how UConn can play a role in terms of the economy, in terms of the academic development of our students and workforce, but also an individual who understands what it means to be a UConn Husky.”

Born and raised in Bristol, Toscano went on from UConn to earn a Master’s of Business Administration at UPenn. Toscano is currently completing an eleven year stint on the UConn Foundation board, including serving as chairman from 2015 to 2018 and as chairman of the investment committee for several years.
He is also a member of the dean’s advisory cabinet for the UConn School of Business and was previously on UConn’s steering committee for athletics fundraising.

After graduating from UConn in 1987, Toscano headed to Wall Street, where he spent the bulk of his career at Bankers Trust and its successor, Deutsche Bank. Toscano joined Morgan Stanley in 2010. He returned to live in Connecticut in 1995 and has been an active advocate for UConn since 2005.

Toscano and his wife, Tresa, have directed the majority of their donations to UConn to students with financial need, attracting top faculty, and athletics. The couple established two four-year, need-based scholarships and they have also created the Toscano Family Chair in Finance in the School of Business.

A statement from the governor’s officer said the Toscanos’ generosity “has been felt in virtually every corner of the university, from the soccer team to the Natural Resources Conservation Academy. ”

The couple has three children: twins, Max and Jeremy, 20, and Olivia, 16. Jeremy is a junior in the School of Business at UConn.

Lamont today also announced Thursday that he is appointing Scott S. Cowen to serve as a member of the board, and re-appointing four other members to continue their service on the group.

Cowen received his bachelor’s degree in 1968 from UConn and also played on the school’s football team. He now serves as president emeritus and distinguished university chair of Tulane University in New Orleans, Louisiana. From 1998 to 2014, he served as president of the university and was named by TIME magazine as one of the nation’s Top 10 Best College Presidents.

The members Governor Lamont is re-appointing include: Charles F. Bunnell, chief of staff for external and governmental affairs to the Mohegan Tribal Nation; Shari Cantor, West Hartford Mayor; and Andrea B. Dennis-LaVigne, veterinarian and founder and owner of the Bloomfield Animal Hospital.

The Board of Trustees is comprised of 21 members: 12 appointed by the governor; two elected by alumni; two elected by students; and five ex-officio, including the governor, UConn Health Board of Directors chair, and the commissioners of Agriculture, Economic and Community Development, and Education.

Opinion The revolution will proceed reclining: the Capitol mob, their past, and the future of democracy

Looking at pictures of Richard “Bigo” Barnett in the U.S. Capitol last week, grinning, his foot resting on a staffer’s desk in Speaker Nancy Pelosi’s office and his arms extended, I recognized a jarringly familiar if initially hard to place tableau. Barnett appeared to be acting, according to Saul Loeb, the Agence France Press photographer who snapped the picture, “just sort of like he owned the place.” Where had I seen this before?

Connecticut faces a deadly threat from climate change, the local results of a global capitalist crisis, and an epidemic of inequality made worse by racial oppression. The means exist to solve these problems and build a better world, but not within the capitalist system.