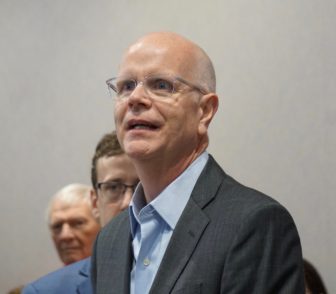 Answer: When legislators and Gov. Ned Lamont designed the budget to run $141 million in the black.

In his first budget forecast of the new fiscal year, Comptroller Kevin P. Lembo also warned Tuesday that given the current economic uncertainty nationally any optimism must be tempered.

“Our early surplus projection for Fiscal Year 2020 should be treated with cautious optimism, because while there are positive early trends, they are just that – early,” Lembo said. “It should also be noted that Connecticut’s budget results are ultimately dependent upon the performance of the national and state economies. For now, economic indicators for the national and state economies are sending mixed messages.”

After grappling with deficit projections for much of Connecticut’s slow recovery since the recession of 2008-2010, state officials have enjoyed surpluses for most of the past two fiscal years.

Connecticut has nearly $1.2 billion in its emergency reserve, commonly known as the rainy day fund, and that is set to explode to a record-setting $2.45 billion at the end of September when Lembo completes his audit of the 2018-19 fiscal year.

That would represent 12.6% of this fiscal year’s General Fund, not far from the statutory maximum of 15%. Connecticut’s largest reserve to date was the nearly $1.4 billion it held until June 2009, equal to about 8% of annual operating costs at that time.

Legislators and then-Gov. M. Jodi Rell drained all reserves in 2009 and also borrowed about $1 billion to cover operating debt.

Eight years later, a new legislature built several safeguards into state finances to approve saving habits to prepare for the next recession.

A special “volatility” cap sets aside a portion of state income tax receipts tied to capital gains and other investment-related earnings, barring lawmakers and the governor from spending them until after the fiscal year has closed.

A second provision requires legislators to build a modest fiscal cushion into each budget. For example, the $21.3 billion budget adopted for this fiscal year — which includes a $19.3 billion General Fund to cover most operating costs — assumes that fund will receive $141 million in revenue than it spends.

And Lembo wrote Tuesday that while the fiscal year, which began July 1, is still very young, Connecticut may need to draw on some of that projected cushion to settle a lawsuit with the hospital industry.

Lamont and the Connecticut Hospital Association announced a tentative deal in late spring. And though details weren’t disclosed, administration officials said most of the funds Connecticut would pay to settle the industry’s dispute over the hospital provider tax would be drawn from last fiscal year’s surplus, though some could come from the 2019-20 budget.

Hospitals are expected to complete their review of the deal in September or October, after which the agreement would need ratification by the legislature.

But Lembo also warned Tuesday this isn’t the only variable in the budget.

While there has been some positive movement in state income tax receipts and home prices continue to appreciate, he said, volatility in the bond market and global financial matters, including the U.S. trade war with China, could be indicators of a recession-to-come.