Connecticut Attorney General William Tong joined 49 attorneys general  on Monday to announce an antitrust investigation of Google, embarking on a wide-ranging review of a tech giant.

Tong and his fellow attorneys general say Google threatens competition and hurts consumers and business through its continued growth on the web and its dominance on the internet.

“This is about competition and opening up the technology marketplace,” Tong said.

The investigation is headed by Texas Attorney General Ken Paxton, who held a press conference Monday on the steps of the U.S. Supreme Court with other Republican attorneys general involved in the probe. California and Alabama are the only states not to have joined the investigation.

He said “there is nothing wrong with a business becoming the biggest game in town if it does so through free market competition.”

But Paxton, Tong and the others investigating Google say it may have undermined consumer choice by limiting information, or making some information more accessible than other,  hurting small businesses that rely on the internet to advertise their goods and products.

“Even if people drive by (your business) every day, you have to have an online presence,” Tong said.

Manipulation of information by Google and other tech giants also may force consumers to pay higher prices, Tong said.

“They bombard us with information and influence us heavily in what we buy,” he said. “It forces us to pay more than what we have to.”

Kent Walker, Google’s senior vice president for global affairs, said his company’s services “help people, create more choice, and support thousands of jobs and small businesses across the United States.”
“Google is one of America’s top spenders on research and development, making investments that spur innovation,” Walker said. “Things that were science fiction a few years ago are now free for everyone…”

After several years of investigation by the U.S. Justice Department and nearly two dozen state attorneys general, Microsoft was sued for alleged anti-trust and other consumer protection violations. The case accused Microsoft of making it difficult for consumers to install competing software on computers operated by Windows. 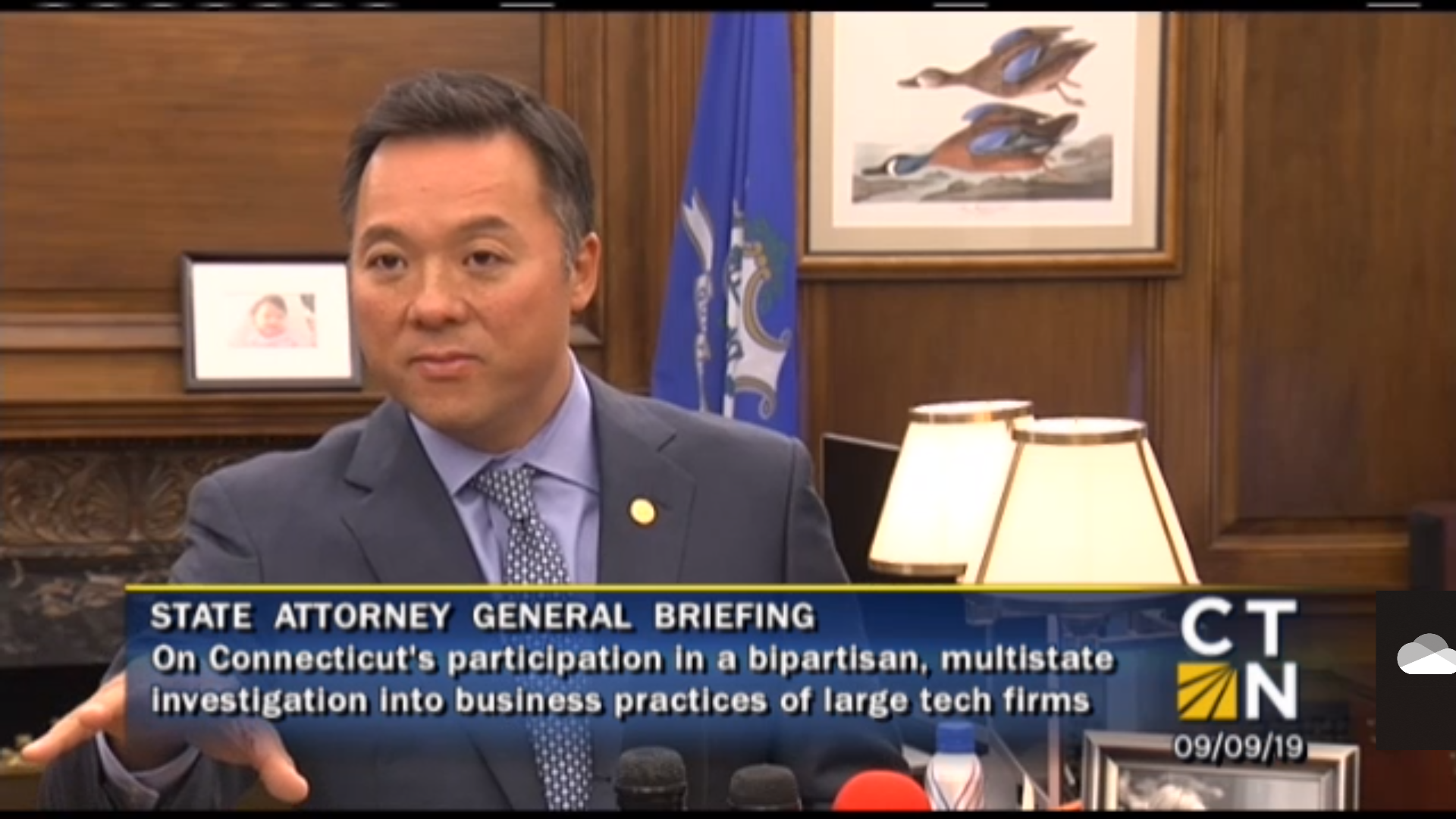 Microsoft agreed to make concessions, but the lawsuit failed to achieve its goal – a breakup of the giant tech company.

Tong, however, is optimistic the investigation of Google will bear fruit.

He said the group of attorneys general have already issued Google a “40-page investigation demand.”

“This investigation is critical to our state and how we do business in Connecticut,” he said.

Tong also said he can work well with Paxton, his opponent in a lawsuit that will determine the future of the Affordable Care Act, and other GOP attorneys general.

“This is a fairly open leadership team and I suspect Connecticut will play a heavy role,” he said.

There is a separate multi-state investigation into Facebook, led by New York Attorney General Letitia James, with attorneys general from seven other states plus the District of Columbia. Connecticut is not involved in that probe.

The U.S. Federal Trade Commission is also investigating Facebook, and the U.S. Department of Justice is investigating Google – and just about every other major technology company including Apple and Amazon – for possible anti-trust violations.

Yet the investigation into Google by Connecticut and other states and U.S. territories represents a new, wide-ranging front in the government-led assault on the tech giant’s power.

And if the Justice Department fails in its mission, some of the more aggressive state prosecutors could carry on the fight.

Google’s Walker said “we have answered many questions on these issues over many years, in the United States as well as overseas, across many aspects of our business, so this is not new for us.”

“The DOJ has asked us to provide information about these past investigations, and we expect state attorneys general will ask similar questions,” he said. “We have always worked constructively with regulators and we will continue to do so.”