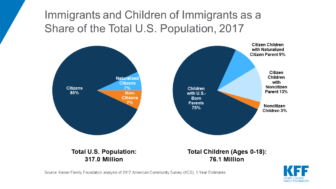 Connecticut has joined New York and Vermont in seeking an injunction to stop the Trump administration from implementing its controversial “public charge” rule that’s aimed at deterring millions of immigrants from accessing public benefits.

“If the Trump Administration is not stopped, nearly 200,000 people in Connecticut will be harmed and their access to basic human needs like health care, food and housing will be jeopardized,” Tong said. “This is needlessly cruel and heartless and we are doing everything we can to stop this attack on immigrant families.”

Under the new rule, which would take effect on Oct. 15, the definition of “public charge” — traditionally meant to refer to someone who is primarily dependent on public assistance — has been expanded to include those immigrants who depend on one or two social service programs for limited periods of time.

The new rule considers an immigrant a public charge if he or she receives public benefits for more than 12 months in any 36-month period. Those benefits include food stamps, Medicaid, housing assistance and Temporary Assistance for Needy Families, a program previously known as welfare.

The request for an injunction filed Monday in the U.S. District Court for the Southern District of New York said the “defendants’ effort to remake federal immigration law to suit their preferred policy objectives is illegal because it exceeds their congressional authorization, contravenes clearly-expressed congressional intent, and bears no reasonable relationship to determining whether an immigrant is in fact likely to become a public charge.”

“The Final Rule transparently seeks to exclude working class immigrants of color to the benefit of wealthier, whiter immigrants ‘coming from Europe,’” the request for an injunction said.

It also said that if immigrants don’t use federal social programs there will be a spike in the number of people suffering from homelessness, food insecurity, and undiagnosed and untreated medical issues, forcing state and local governments “to bear severe financial and public health consequences.”

States and local governments would also be hurt by a decrease of federal spending in their jurisdictions.

California, which has the largest number of immigrants, and 15 other states have also filed lawsuits against the new public charge rule, as have a number of counties and cities, including San Francisco, and immigrant advocacy groups.

The Trump administration, however, says it is imposing the new restrictions to prod immigrants toward self-sufficiency.

There is evidence the new rule, which the Trump administration unveiled in October of last year, has already had an impact.

A new U.S. Census Bureau survey says the proportion of Americans without health insurance has grown significantly for the first time in a decade.

The national drop in the number of insured was driven primarily by a decrease in enrollment in Medicaid, or HUSKY as that health program for the poor is known in Connecticut, dropping by 0.7%.