GOP: ‘Restaurant tax’ has exploded into broad hike on groceries 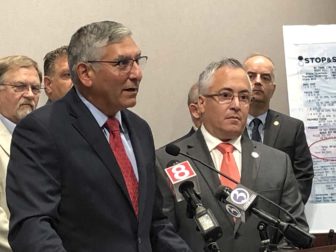 Shoppers will pay a higher sales tax rate on far more than restaurant meals when a new 1% surcharge kicks in on Oct. 1, Republican lawmakers charged Thursday.

The extra penny will come on each dollar spent on popsicles and other frozen treats, doughnuts and bagels, pizza slices, hot dogs, smoothies, power bars, a hot bag of popcorn, and even pre-packaged bags of lettuce and spinach, according to written guidance prepared for grocery stores and other retailers by the Department of Revenue Services.

The effective sales tax rate of 7.35% also applies to beer, fruit juices, milkshakes, hot chocolate, wine, and distilled alcohol like brandy or rum. It even applies to coffee and tea if purchased prepared to drink, rather than as coffee grounds or in tea bags.

“It is simply a money grab, that’s all it is,” Senate Minority Leader Len Fasano, R-North Haven, said during a mid-day press conference in the Legislative Office Building.

“It opens up so many items to taxation,” said Deputy House Minority Leader Vincent Candelora, R-North Branford. “… At best this [tax legislation] was sloppy work. At worst it was very purposeful.”

GOP lawmakers predicted the new tax, which was adopted by the Democrat-controlled legislature and signed by Gov. Ned Lamont, also a Democrat, will amount to a sweeping sales tax hike on many consumables that most residents consider to be groceries — and which therefore should be tax-exempt.

The concept of a sales tax hike on prepared foods originally was proposed by the legislature’s Finance, Revenue and Bonding Committee as an option to funnel more revenue into cities and towns. Communities would be allowed to keep the extra sales tax receipts generated by businesses within their borders.

But when Lamont opposed a committee plan also to raise income tax rates on the investment earnings of Connecticut’s wealthiest residents, the administration and Democratic legislative leaders scrambled to find other revenue-raising options.

The tax on prepared foods remained in the new state budget — but instead of giving the money to the towns, the state would keep the revenue.

But regardless of who was getting the tax receipts, the tax itself was described largely as a tax on restaurant food or on “prepared meals.” In other words, someone who purchased a grinder and small soda combination, even at a supermarket, would pay the extra tax.

Yet when the Department of Revenue Services released a policy statement to instruct retailers on how to apply the new tax, it was applied to a much wider range of prepared foods.

Sandwiches and grinders — whether sold at a restaurant, grocery store or convenience store — were included in the memo listing “examples of taxable meals.” But so were much smaller quantities of prepared foods.

“They consider this a meal,” Fasano said, holding up a power bar.

What was described as a tax on prepared meals evolved into a levy on meals, snacks and other foods that could be purchased and consumed with little or no work, Candelora said.

Democratic legislative leaders said Republican criticism of the budget are unfair, given that the GOP offered no plan last spring.

“It’s apparently easier for the GOP to criticize rather than do the work of presenting their own budget,” said Max Reiss, Lamont’s communications director. “Connecticut will have the largest rainy day fund in history and this budget maintains and grows our reserves, providing reliability and predictability for our taxpayers, businesses, and those looking to invest in our state well into the future.”

“I’m still waiting for the Republican budget,” said Sen. Cathy Osten, D-Sprague, co-chairwoman of the Appropriations Committee. “I feel it is a little bit disingenuous.”

The legislature’s nonpartisan Office of Fiscal Analysis estimated back in early June that the tax surcharge would raise $48.3 million between Oct. 1 and the end of the fiscal year on June 30, and $65.8 million in 2020-21, during its first full fiscal year of implementation.

But Republican lawmakers asked OFA this week to recalculate its projections based upon the DRS guidelines.

Candelora and Fasano both predicted the tax hike would generate more than the original forecast.

Candelora also noted that the Lamont administration back in January had researched removing the longstanding sales tax exemption on groceries as part of a larger plan to close numerous exemptions and also lower the overall sales tax rate on all items.

“That fell like a lead balloon,” Candelora said, adding too many legislators feared “it would hurt the most needy people.”

Fasano added that this sales tax surcharge would have the same effect. The elderly, single people and others who purchase and consume small quantities of food at one time would be harmed, he said.

4 thoughts on “GOP: ‘Restaurant tax’ has exploded into broad hike on groceries”