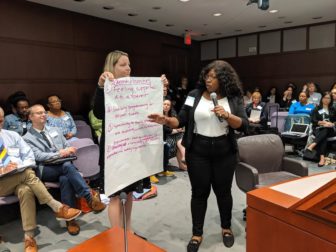 Fatima Horton, a parent from Middletown, presents a list of child care priorities reached by parents at Thursday’s event. Valerie Hosley, a Yale professor who had trouble finding child care for her daughter holds the list.

The national director of child care came to Hartford Thursday and got an earful from parents and child care operators from around New England, who complained about both the lack of affordable, quality care and the difficulty of finding qualified staff.

Shannon Christian, director of the Office of Child Care in the U.S. Department of Health and Human Services, is making a tour of 10 regions in the U.S. — with Hartford as her first stop  — to hear directly from parents, providers, employers, policy makers and others.

“We know a lot of the problems, but we’re trying to think about very specific barriers that we might address, as well as look for innovations and for people who have made progress on those issues that we can start to share with others,” Christian said. “We want to make sure we hear all the different perspectives and that we’re in rooms where the different perspectives hear each other. We need to hear from real people with real lived experience talking about what they can do to move the needle.”

By the time Christian is done with the nationwide tour, she hopes to have “a taste of America” in the child care arena. On Thursday at the Legislative Office Building, dozens of people from all over New England delivered their perspectives on the tensions and difficulties that permeate the child care field.

Danbury resident Angali Illescas told the group that although she is a licensed social worker, she chose not to return to work after her third child was born because child care for her three children, who range in age from 4 to 14 months, was too expensive.

“So this past 14 months, I have been home with my kids and it has been rough financially but it has been the best option for my family because child care is just not affordable with three small kids,” she said. “It just would have been me going to work to pay for child care.”

Lori Cuyler had a similar story when she went to look for child care for her 18-month-old while her older two were in school. She was determined to find a quality program and paid $100 to apply to one that provides financial aid to families who need it, but was denied a scholarship. So her husband stayed home with their child. 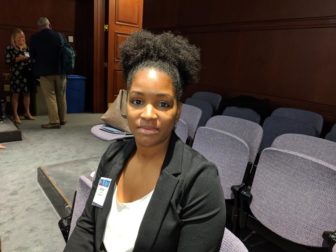 Lori Cuyler, a West Hartford mother, couldn’t find affordable quality daycare for her child, so her husband had to stay home with their toddler.

“My husband had to turn down a full time position, which really would have helped us,” said Cuyler, a West Hartford resident. “That was kind of another blow to us.”

Recently, she said, she was lucky enough to get a spot for her son, now 2, in a public school pre-kindergarten.

Another mother, Delrose Newman, a single mother from Massachusetts, said she lost a job because her employer wasn’t flexible on the occasional day her daughter was sick or Newman had to get to the child care center before it closed. She said she was out of work for almost two years, which set her back professionally.

Sue Murphy, executive director of the Liberty Bank Foundation, said that employers have to be part of the solution.

“It’s not okay for people to have to feel that constant tension between the need to work and the need to take proper care of your children,” she said. “We put people in an impossible situation. I think employers who are really focused on the success of their companies need to be focused on the success of their employees and their ability to take care not just of their job, but their whole life. I think it is possible to be a great company and very profitable … and to be able to be flexible and understanding that certain employment practices are damaging to families and if we keep this up as a sector, businesswise, we’re setting ourselves up for failure.”

Many of the child care operators and policy experts talked about how difficult it is to pay teachers and staff adequately enough to attract people into the profession, while keeping the cost of child care affordable.

“We’re on a teeter totter between access and quality,” said Elaine Zimmerman, regional administrator in New England for the Administration for Children and Families. “We have to stop treating it like it’s babysitting.”

Jill Marini, director of early learning and school age programs at the YWCA Hartford Region asked, “How do I pay a teacher equitable wages that put her equal with her peers that have bachelor’s degrees and are professionals in their earnings? How do I provide quality materials and experiences for children, but make it all affordable for parents?” 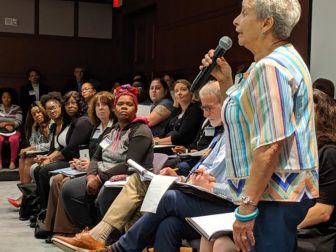 Suzanne Rutner, director of Northwest Children’s Center, talks about the difficulty she’s had finding teachers for her center.

“I spent all summer recruiting teachers and we started the school year still short. We have classrooms we can’t open because we don’t have enough teachers,” Marini said, adding that she offers a salary that is competitive but still not as high as what public schools pay early childhood teachers.

“If you can make $68,000 as a kindergarten teacher and you have summers and spring break off, why would you work eight or nine hours a day, 52 weeks a year?”

Suzanne Rutner, director of the Northwest Children’s Center in Cromwell, said she has been looking for a full time “quality” teacher since July 1 and now is looking for two.

“I have advertised. I’m on list serves. I’ve called colleges. I’ve talked to family and friends,” she said. “I would like to say that we we pay very well.”

She said she pays her teachers $19.70 an hour and her assistant teachers $14 and $15 dollars an hour and has a strong benefits package, but has been unable to fill the position.

“We want to increase the the amount we can pay, but it’s a conundrum,” Rutner said, “because we also have to ask our parents to give us higher tuition, so walking that fine line is tricky.”