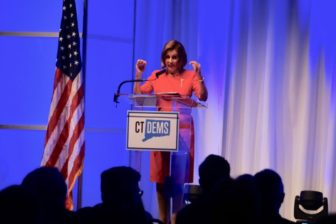 U.S. House Speaker Nancy Pelosi during her last visit to Connecticut in June.

House Speaker Nancy Pelosi will be in New Haven on Saturday to help Rep. Rosa DeLauro promote equal pay for women and raise money for the Democratic Congressional Campaign Committee.

The DCCC did not respond to a request for details about the fundraiser, but DeLauro campaign manager Sarah Locke said “there will be a short fundraiser over the weekend in New Haven to raise (money) for the DCCC.” The event, to be held early Saturday afternoon, will be jointly hosted by DeLauro and Pelosi to raise money for congressional candidates that need fundraising help from the national party.

DeLauro, D-3rd District, and Pelosi will also jointly host an event at Gateway Community College Saturday morning aimed at promoting equal pay for women, part of the Democratic leader’s campaign to promote legislation approved by the U.S. House that has stalled in the Senate.

The U.S. House in March approved DeLauro’s Paycheck Fairness Act, legislation that would increase penalties for violations of equal pay laws and forbid employers from contractually barring their workers from disclosing their wages.

That was the third time the Paycheck Fairness Act was approved by the U.S. House, but the legislation has for years failed to garner a vote in the Senate.

“They both have been working for equal pay for over two decades,” said DeLauro spokesman Will Serio about the Connecticut lawmaker and Pelosi.

At the event at Gateway Community College Saturday morning, Pelosi is expected to blame Senate Majority Leader Mitch McConnell for keeping the Paycheck Fairness Act off the Senate floor.

The Democratic leader, as well as DeLauro, will also likely face questions about their opposition to the impeachment of President Donald Trump during a question and answer period at the event.

The trip to Connecticut on Saturday would be the second time Pelosi visits the state. In June, the speaker, who raises money for both state and national Democrats, was the keynote speaker at the Connecticut Democratic Party’s chief money raising event, the John Bailey Dinner, where she was introduced by DeLauro.

The House Judiciary Committee this week approved a resolution that laid out the ground rules for impeachment hearings.

But Pelosi avoided saying an impeachment was underway, saying instead that House Democrats were “on the same path” as before, collecting information through a number of probes of the Trump administration and the Trump campaign.

Pelosi and DeLauro have a close personal relationship. Pelosi has picked DeLauro for key leadership roles in the U.S. House, notably co-chairman of the Democratic Steering Committee, a top job on the House Appropriations Committee, and a member of a negotiating team trying to reach a deal on a new U.S.-Mexico-Canada trade agreement.

“I think they have a close relationship working on appropriations and trade,” Serio said.