So far, Larson and Lamont don’t intersect on highways 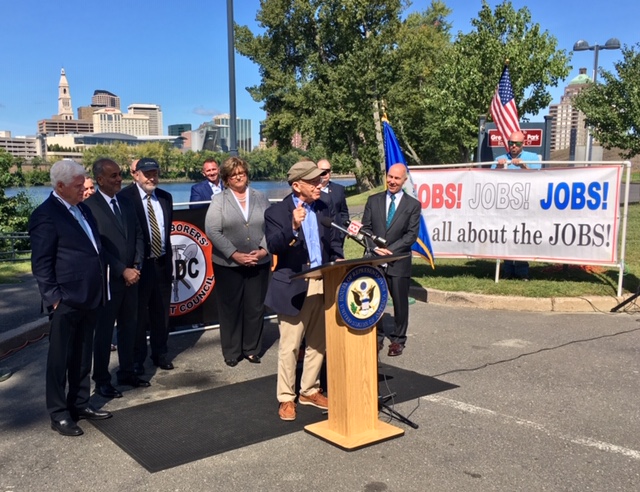 Another pitch for U.S. Rep. John Larson’s tunnel idea, this time at Great River Park in East Hartford. Larson is at left, Peter DeFazio is at podium and Don Shubert of the construction industry is at right.

East Hartford — U.S. Rep. John B. Larson, D-1st District, joked Friday about his “tunnel vision.” For three years, he has been promoting a multi-billion dollar concept for burying the I-84/91 interchange in Hartford. And that, according to a colleague, makes him unique in Congress.

Larson, 71, a congressman for 20 years, is not simply seeking federal funding. He is working outside the state Department of Transportation on his own infrastructure vision, one that would compete with plans being developed by the administration of Gov. Ned Lamont.

“John is uniquely persistent and vocal and visionary,” said U.S. Rep. Peter DeFazio, D-Oregon, the chairman of the House Transportation and Infrastructure Committee. Asked if he could name another colleague playing the role of infrastructure auteur, he simply replied, “No.”

Larson and DeFazio held a press conference Friday in Great River Park to promote Larson’s tunnel, an event organized around three political and charitable fundraising events. Larson held a nearly identical news conference at the park in 2017 with DeFazio’s predecessor.

House Speaker Nancy Pelosi, D-Calif., arrived at midday for a luncheon fundraiser for the Democratic Congressional Campaign Committee and planned to stay for Larson’s annual charitable party: A bocce tournament at a Knights of Columbus hall in the congressman’s hometown of East Hartford, where locals mingle with Connecticut and national pols. 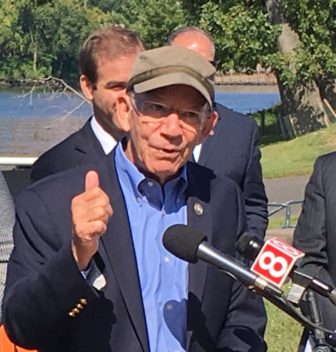 DeFazio’s re-election campaign was the beneficiary of a breakfast fundraiser geared to a construction trade group in Connecticut that is always happy to support whomever is chairman of the Transportation and Infrastructure Committee.

“For us, the chairman of T&I is the most important member of Congress,” said Don Shubert, the president of the Connecticut Construction Industries Association.

Notably absent from the news conference at Great River Park was any representative of the Lamont administration, which has told Larson that his tunnel plan will not be an element of a 10-year transportation plan in development by the governor. Lamont’s predecessor, Gov. Dannel P. Malloy, also never endorsed the idea.

No one has a precise cost of Larson’s plan, since it has been sketched out only in schematics, not detailed drawings. But the congressman uses a ballpark figure of $10 billion, which could be as much as half of what Lamont intends to propose to spend on a statewide plan.

Hartford Mayor Luke Bronin, who attended the press conference, said major elements of Larson’s are attractive, namely correcting what he called “those two great planning sins of the last century” — cutting Hartford in half with I-84 and separating the downtown from the Connecticut River with I-91.

DeFazio said the interstate highway system is the neglected legacy of the post-war Eisenhower administration.

“And in some places like here we made big mistakes when we built the interstate system,” DeFazio said. “We have to rebuild it, and when we rebuild it, we need to correct the mistakes of the past and build in resiliences for the future with the extreme weather events that are coming with climate change.”

Larson said the I-84/91 reconstruction should be a design/build project — a process in which his idea would be one of many to be evaluated.

“If we go with design/build, what they are going to have to do is take all the proposals and say, ‘OK, does this work out?’ And that’s a job for the engineers, not me. My job is to get the money and get enough money so that if we’ve got the green light, we go with what’s going to deliver the biggest bang for us,” Larson said. “And I still think that’s tunneling.”

Riverfront Recapture has reconnected the city to the river with decks over the highway, but Larson’s plan is to place I-91 in a tunnel, making way for a new pedestrian boulevard.

It also would place I-84 in a tunnel in a new route south of downtown, opening acres of developable property. The highway currently passes through Hartford on a viaduct, which needs replacement, and below grade in a “canyon’ that separates the downtown from the North End.

One of the reasons for the administration’s lack of enthusiasm is cost.

States typically have to contribute at least 20 percent to federally funded infrastructure projects. Even if Larson, a member of the House Ways and Means Committee, can work with DeFazio to make the tunnel project a national infrastructure priority, Connecticut could have to pay $2 billion or more.

“I understand everybody’s skepticism, but how do I ask for money to repeat the mistakes of the last 50 years?” Larson said.

Lamont and Larson are not exactly at odds. The Democratic governor and congressman are allies, and Larson invited Lamont to a cocktail party in Hartford, where the governor mingled Thursday night with DeFazio and other members of Congress in town for Larson’s bocce tournament.

In an emailed statement that read like a diplomatic communique, the governor’s communications director, Max Reiss, downplayed the differences in the transportation priorities of Lamont and Larson.

“The administration is incredibly thankful to have a partner in Washington like Rep. John Larson. He is a steadfast supporter of improving the infrastructure and accessibility in the Greater Hartford area, which is something we share,” Reiss said. “The administration will continue to work with the Congressman and other federal partners on how the state can help with this vision with assistance from the Federal Government.”

The question of whether Larson’s grand vision is viable is moot until President Donald Trump and the Senate Republican majority agree with House Democrats on a major infrastructure spending plan. Trump briefly agreed to spend nearly $2 trillion, then backed off.

DeFazio said the president recently invited House Democrats to talk again about infrastructure. But Trump is mercurial, if nothing else.

“OK, we’ll go there again, but it has to be about funding. I don’t know if that’s going to happen or not. Day to day, you don’t know with this guy. But we can’t get through the Senate without him,” DeFazio said.

“He wants to build stuff,” DeFazio said of Trump. “I think the reality of his re-election is setting in. I get more and more worried as his numbers go down that people on my side will say, ‘Wait a minute, this will help him.’ I’ve been saying, ‘Look, we have plenty of things to go after him on.’ Infrastructure is for the country.” 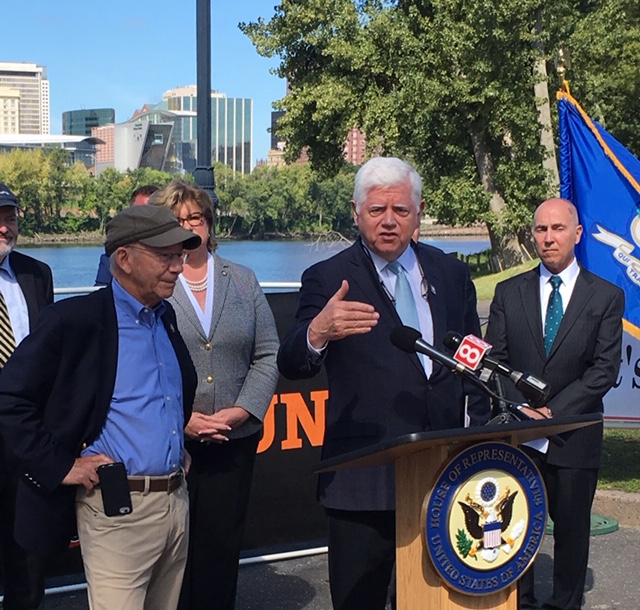 2 thoughts on “So far, Larson and Lamont don’t intersect on highways”