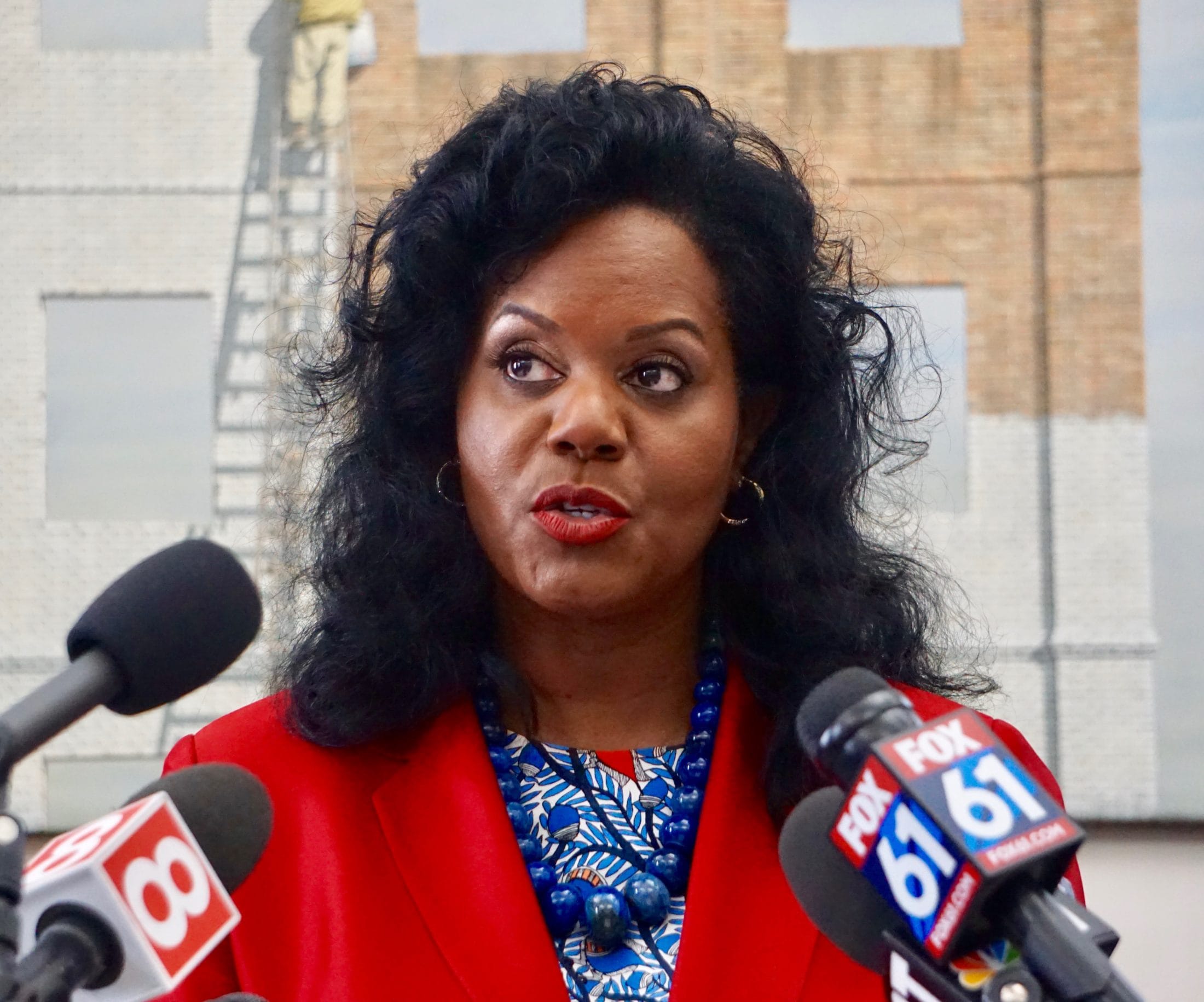 Renée Coleman-Mitchell, the commissioner of public health, unequivocally urged legislators Monday to repeal Connecticut’s religious exemption from required vaccinations for children entering school, a move some legislative leaders called overdue but welcome as they press ahead with an effort to erase the provision.

Coleman-Mitchell previously said it wasn’t her job to weigh in on pending legislation, but she reversed herself and pledged to testify in support of the measure when it’s introduced during the session that begins in February.

The commissioner and Gov. Ned Lamont recommended the exemption be eliminated effective Oct. 21, 2021 to give parents time to prepare for the change. Vaccinations are required for all students entering public and private schools, but home-schoolers are not covered.

The proposal, which was first reported last week by CT Mirror, was formally announced at a press conference in the governor’s office with legislative leaders, physicians and religious leaders. No major religion prohibits or advises against immunizations, but an increasing number of parents opposed to vaccinations are using it.

The proposed legislation would not force children to be immunized, but it would bar unvaccinated children from enrolling in Connecticut’s public and private schools. Coleman-Mitchell and other state officials cited concern for children with compromised immune systems who cannot be vaccinated for medical reasons.

Her remarks come a week after some lawmakers complained about a lack of responsiveness from her office. Democratic leaders sent a letter to Coleman-Mitchell in June seeking her opinion on whether to repeal the religious exemption. They also publicly called for her input several times, but months passed without an answer.

In August, Coleman-Mitchell told reporters: “I am not able, nor should I weigh in on anything that’s public legislation that comes about as a result of any of the work we do. That’s not in the purview of my role.”

A spokesman for the commissioner said the same thing at a vaccine awareness event earlier last month.

On Monday, Coleman-Mitchell downplayed her reversal and said her office simply needed time to research the issue. 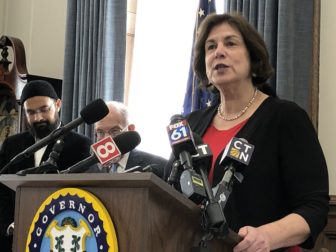 “I take this role and responsibility very seriously,” she said. “Legislators months ago asked me questions regarding immunizations. They also asked me if we should repeal the religious exemption.”

“The answers to these questions deserve thoughtful consideration from all sides,” Coleman-Mitchell said. “I truly appreciate our legislative leaders for their patience while my team and I have deliberated.”

Lawmakers promised to introduce a bill this winter that will be subject to a public hearing and make its way through the normal legislative process. An attempt to repeal the exemption outside the regular committee process was shelved.

If successful, Connecticut would join several other states that recently have voted to remove non-medical exemptions. New York, Maine and Washington this year all abolished religious or philosophical exemptions.

“The opponents of vaccination say their rights as parents are being infringed upon,” said Senate President Pro Tem Martin Looney, D-New Haven. “That’s certainly not true because children are not chattel. They’re not possessions of their parents.

“The parents have an obligation to care for their children. That’s why we have circumstances where the government steps in to protect children who are not being properly protected.”

Two clergy members said there were no prohibitions in their faiths on vaccinations. To the contrary, a rabbi from Bloomfield and an imam from Avon talked about the duty of shielding those who are vulnerable.

“I speak on behalf of the overwhelming majority of my community,” said Rabbi Debra Cantor of B’nai Tikvoh-Sholom. “Jewish law is clear. Those who are healthy must get vaccinated. … You may not separate yourself from the larger community. You may not endanger those who are vulnerable.” 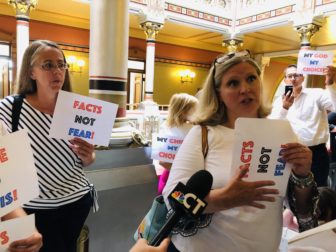 Proponents of the religious exemption gathered outside the governor’s office to protest the announcement.

“When it comes to children,” added Imam Safwan Shaiah of the Farmington Valley American Muslim Center, “when it comes to parents who look out for their loved ones, there is no exemption from the sanctity of life. All of us are here to protect each other and especially each other’s children.”

The next step in the run-up to raising legislation is the disclosure of updated school-by-school vaccination data.

The governor last month overruled the health commissioner after she told reporters she would not release school-by-school figures, as she had in May for a prior school year. Coleman-Mitchell now says she plans to publish the most recent statistics – from the 2018-19 year – on the health department’s website in October.

Statewide data released in August show the number of students who claimed the religious exemption increased by 25 percent between the 2017-18 and 2018-19 school years – the largest single-year jump in people choosing the exemption since the department began tracking immunization data a decade ago.

Additionally, the percentage of kindergarteners who were vaccinated against measles, mumps and rubella decreased between those school years, to 95.9 percent, down from 96.5 percent.

“We’ve been hearing from many parents of immunocompromised children who are terrified at the prospect of sending their children to school in a situation where they may not be safe,” Looney said. “That is why the aggregate data of 95 percent or so is of no real help and no real comfort to those families. They need to know exactly what the immunization level is in the schools their children attend.”

The medical and scientific communities overwhelmingly vouch for the safety and efficacy of childhood vaccinations, and peer-reviewed studies consistently find no link to autism, a frequent concern raised by parents wary of vaccines.

Proponents of the religious exemption gathered outside the governor’s office Monday, where state leaders held their press conference. Waving signs and shouting, they accused lawmakers of having inappropriate ties to the pharmaceutical industry and questioned the urgency of rolling back the exemption.

“There is no emergency,” said Barbara Rudini of Trumbull. “We don’t believe there’s any true concern for immunocompromised children at this time.” 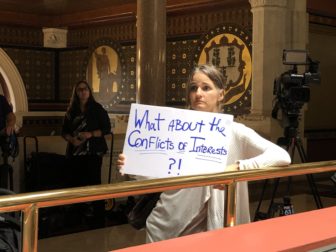 Megan Belval of Avon called the push by lawmakers a “nonsensical removal of our constitutional rights.”

“This is all backwards,” she said. “There is no health emergency. Has anyone died from measles? … This is horrible that our legislators who work for us are getting away with this. It is wrong. They will be on the wrong side of history.”

House Majority Leader Matt Ritter, D-Hartford, a strong supporter of eliminating all but medical exemptions, said the opponents are passionate and will create some “rough seas” for lawmakers next year.

Legislators face re-election in 2020, but Lamont said he was unwilling to postpone action on the issue. Republican leaders were invited but did not attend Monday’s announcement.

3 thoughts on “DPH commissioner finds her voice on immunizations”