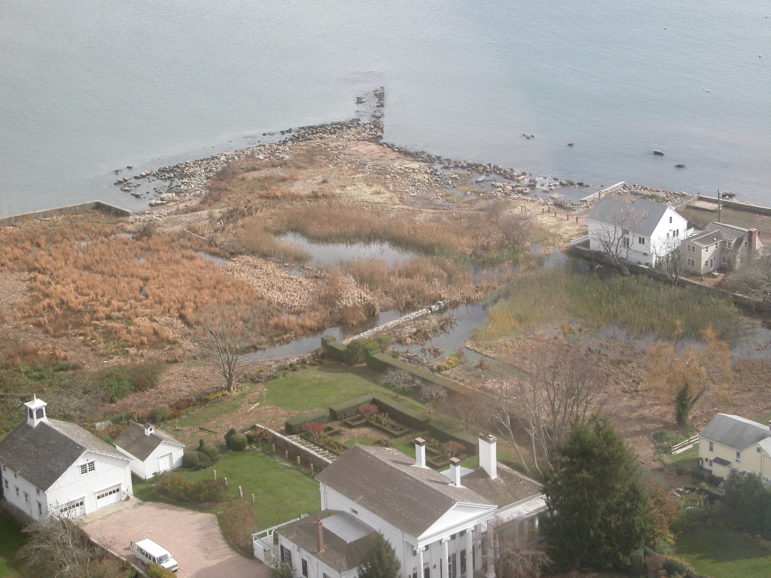 The Dodge Paddock/Beal preserve after Superstorm Sandy ripped through the coastline.

Editor’s Note: This is the second of six stories exploring how Connecticut is grappling with the effects of climate change, one small solution at a time.

If you want to understand the extent and power of what sea level rise in Long Island Sound can do, have a look at the less than four acres that is the Dodge Paddock/Beal Preserve in Stonington.

If you want to understand how to adapt to sea level rise, look at the exact same land.

Back around 1980, when most of the two parcels came into possession of the Avalonia Land Conservancy, which owns both now, it was a coastal meadow that required regular mowing, said Beth Sullivan, a volunteer with Avalonia.

But by the late 1990s and early 2000s — at least partly as a result of sea level rise — the property was getting so much wetter it could no longer be mowed. Phragmites, the invasive grass and bane of the shoreline, was running wild.

“There were trails that allowed people to go on a loop walk,” Sullivan said. “You couldn’t do that anymore.”

Not without waterproof boots, anyway.

All that water brought more mosquitoes – a health hazard.  But just as the Department of Energy and Environmental Protection was figuring out how to drain the water, Superstorm Sandy hit.

“Sandy in 2012 is what broke it down completely,” Sullivan said. 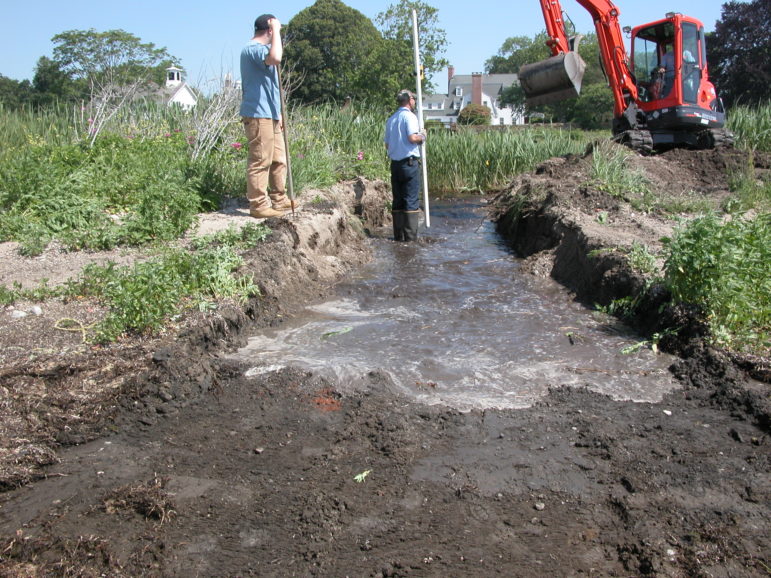 Workers from DEEP had to dig a swale through the berm to release water from Superstorm Sandy.

An existing drainage pipe was destroyed, a seawall was breached, and a huge berm of sand and gravel was pushed up onto the land. DEEP had to dig a swale through the berm just to release the water.

Avalonia decided the best option would be to restore some of the land so nature could do the rest. What nature eventually did was create far more salt marsh than had existed there before – not much of a surprise given the increase in tidal flooding.

Salt marshes are nature’s way of absorbing water and shoreline changes – holding and releasing water to accommodate flooding and moving inland as areas are inundated from the sea level rise underway now.

Sullivan remembers watching the plants come in the years after Sandy dumped all that salty water. “The plants growing in were salt marsh plants,” she said.

Avalonia helped it along with assistance from Mystic Aquarium, guidance from Juliana Barrett – an educator with Sea Grant and UConn — and a couple of grants totaling about $100,000, which it matched with dollars and elbow grease.

Beginning in 2016, volunteers planted thousands of plugs of spartina marsh grass – critical to the ecosystem now loaded with salt – along with other salt-tolerant plants. 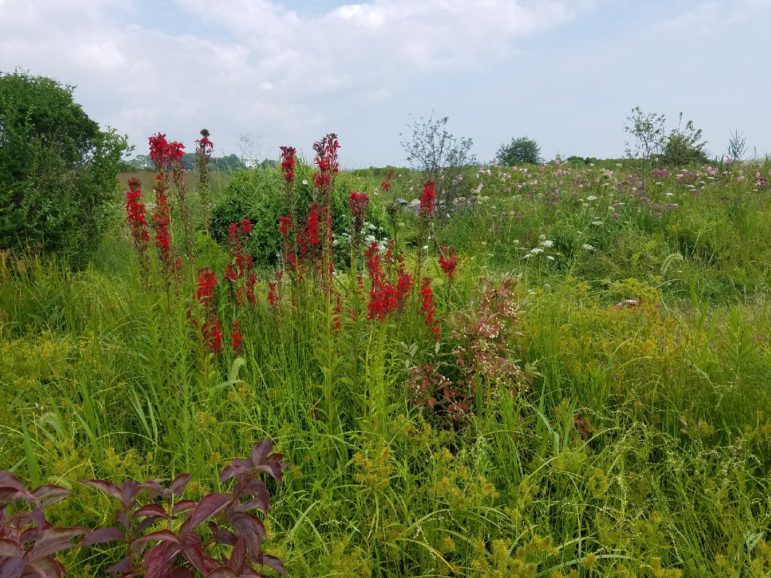 The flooded area of the Dodge Paddock preserve in Stonington was transformed this summer into a field with a variety of native plants.

Barrett said the situation and ultimate solution at Dodge Paddock/Beal shows that sea level rise is really happening. Her recommendation: “Where possible, work with nature not against it.”

This spring, she helped Sullivan and her volunteers plant additional native plants that are now labeled so people can see what plants can withstand salt and help with future marsh restorations. They’ll also be monitoring soil data over time.

Even so – she admits people still grouse about the old walking path, now wet and muddy more days than not.

“The mud is mud because of sea level rise, water table rise, and flooding. I cannot make it not muddy where you used to walk,” Sullivan said. “It will never go back to being a ballpark and a mowed lawn.”