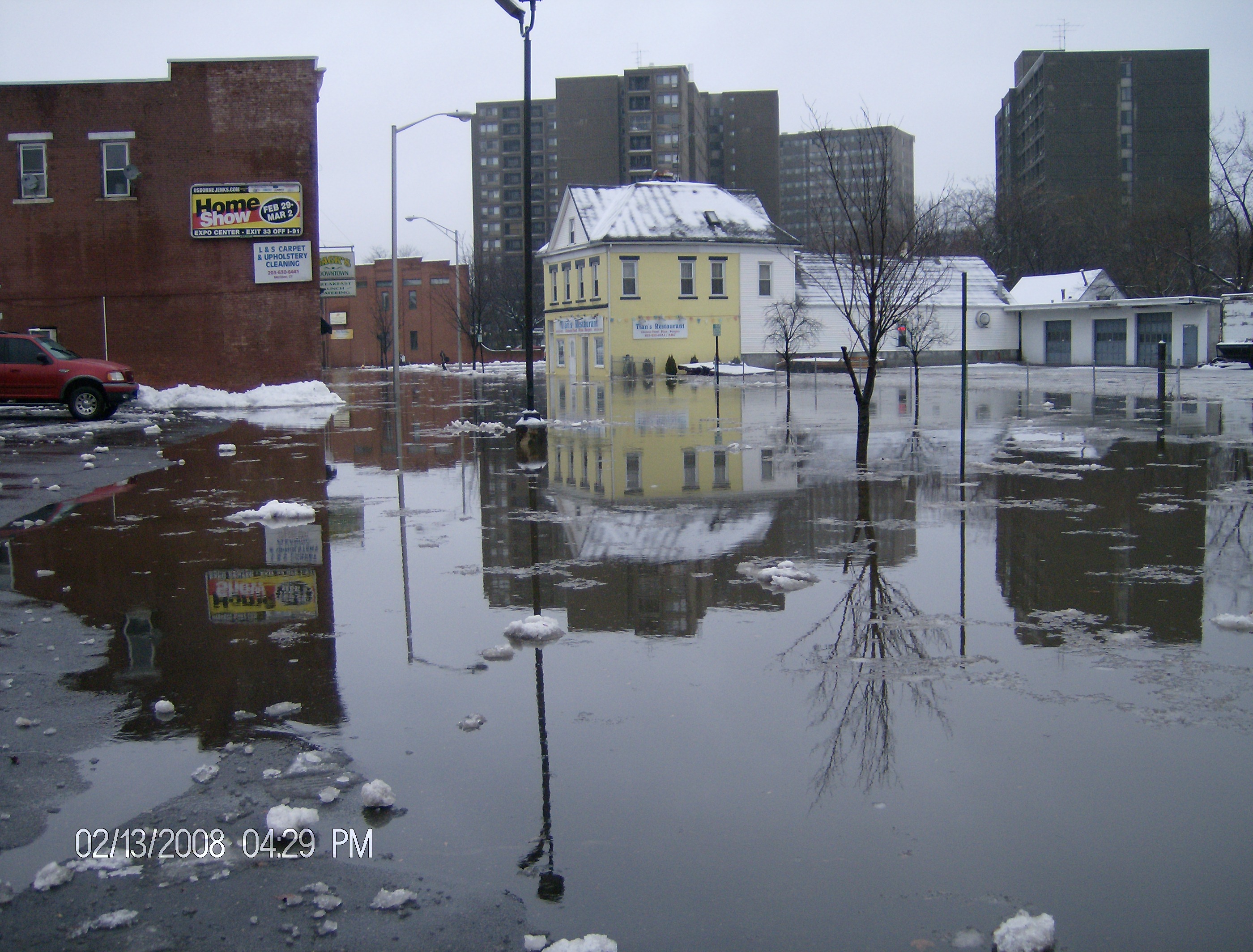 Floodwaters coursed through downtown Meriden streets in 2008 before the flood mitigation project.

Editor’s Note: This is the third of six stories exploring how Connecticut is grappling with the effects of climate change, one small solution at a time.

With Harbor Brook running through its low-lying downtown, generations of Meriden residents have lived with water in their roads and basements after big storms and heavy winter runoff. One reason is because part of the brook – which is a lot closer to the size of a river — was buried underground and routed into a concrete-lined channel, which doesn’t drain like a natural waterway.

Worse yet, the area housed a silver manufacturing company that eventually turned into a brownfield and contaminated the floodwaters.

“With culverts, undersized bridges and a retaining wall – the water had nowhere to go but out,” said Howard Weissberg, the city’s director of public works. “Every major storm event resulted in flooding.”

But since 2016, Meriden has had far fewer water worries thanks to an innovative flood control concept called Meriden Green. City planners, landscape architects and others who do climate resilience work in Connecticut think it should be a model for every community.

The core of the project has turned the brownfield area and the river that runs through it – which is now above ground – into a 14-acre park that doubles as a detention basin for water in flood events. The remediation is designed to spur economic development and housing in the area, which had become undesirable if not unusable. 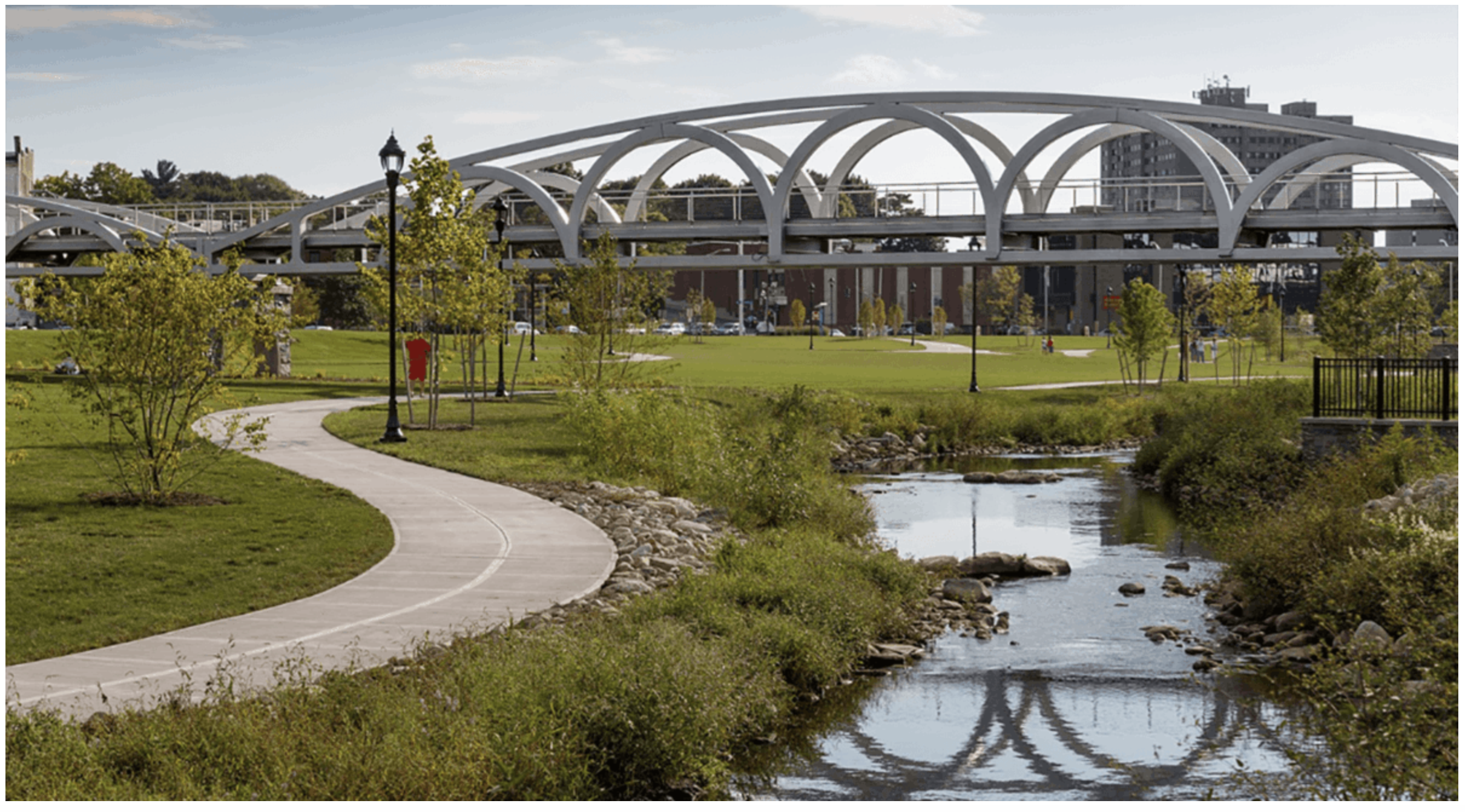 Meriden Green with Harbor Brook is now at ground level and no longer in a concrete channel.

In 2007, the city received nearly $3 million in state and federal grants to study what to do with the site, which at that point was home to a failed mall.

“We knew we had a big problem on our hands. It was now or never,” said Juliet Burdelski, a city planner by training who served as Meriden  economic development director until this year. “We hadn’t had a major flood in a while, but the clock was ticking.”

Plans were in the works when Tropical Storm Irene came through in 2011, followed by Superstorm Sandy a year later. “It verified what we were doing,” Burdelski said.

The system began working even as it was being constructed, collecting and draining the water the way it was intended. 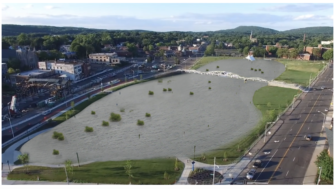 “There was confusion in the public – ‘oh it’s flooding,’ Burdelski said. “No, it’s not – its detaining the water.”

Meriden Green, which cost about $14 million to construct, now contains a completely freed Harbor Brook that properly drains. The brownfield relics have been removed. There are walking and biking paths and an amphitheater. There are a couple of other detention ponds, one up, the other downstream of the green.

New and rehabbed historic buildings are in progress or available for housing – including affordable units — and commercial space, all accessible to the new commuter rail station.

The flood control work, which will total $60-$70 million – isn’t quite finished. When it is, the flooding mitigation will have removed 220 commercial and residential properties from the floodplain, which will eliminate the need for prohibitively pricey flood insurance.

Weissberg said he recently was talking to a young couple who were paying $300 a month for flood insurance. When he told them about the floodplain changes around downtown housing, he said their response was, “Great, where do I sign?” 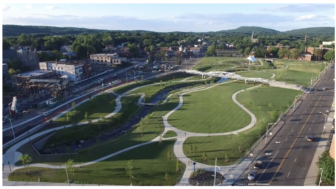 Meriden Green under normal circumstances. The center part is also design to act as a detention basin for floodwaters.

The lesson for other community leaders – and many have come to look at Meriden’s work – is that flood control is not political and can be useful and attractive. That’s been proven any number of times since the Meriden Green portion has been in place.

But Weissberg said he has to keep reminding people that while Meriden Green may look like just a park, it’s not.

“The park needs to function as a flood control structure first,” he said.