Three words. Big argument on what they mean. 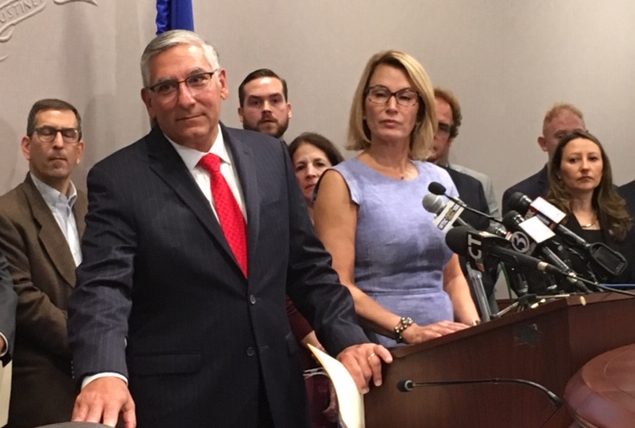 Republicans and Democrats dug in Wednesday on whether Connecticut law clearly defines what is a meal subject to the sales tax. At issue is the impact of two words in the new budget, “grocery store,” on a longstanding interpretation by state tax collectors of one word, “meal.”

GOP leaders pressed for a special legislative session to correct what they insist is a badly written law that is about to make certain groceries subject to the sales tax for the first time, while Democrats say the Republican minority is playing politics.

A provision of the budget adopted in June does two things: Effective on Oct. 1, it increases the sales tax on meals by one percentage point, from 6.35 percent to 7.35 percent; and it explicitly lumps in grocery stores with restaurants and caterers when it comes to the taxation of meals.

The definition of meal is unchanged and requires a mere 25 words in state law: “ ‘Meal’ means food products which are furnished, prepared or served in such a form and in such portions that they are ready for immediate consumption.”

The law then offers 28 words of additional guidance: “A meal as defined in this subsection includes food products which are sold on a ‘take out’ or ‘to go’ basis and which are actually packaged or wrapped.”

The intent of the new law is to raise the tax on meals, whether sold at a restaurant or grocery store, Gov. Ned Lamont has said. The goal is finding new revenue, while underscoring the need to treat sellers of meals equitably.

Since 2002, the Department of Revenue Services has collected the sales tax on certain foods deemed to be meals at grocery stores. For example, a sandwich purchased at a deli counter or a cup of coffee at a store snack bar long has been taxable.

With the inclusion of “grocery store” in the list of eating establishments covered by the sales tax on meals, the DRS has issued a five-page policy statement that advises grocery retailers that some bulk items are now taxable under certain circumstances.

Whole loaves of bread and whole cakes and pies still are considered non-taxable bulk items, while whole cooked chickens, racks of ribs or trays of pasta are considered food items for immediate consumption and are subject to the sales tax.

Many foods packaged in small sizes now would be taxable for the first time: ice cream, less than a pint; lettuce or other salad greens, less than 8 ounces; doughnuts, muffins and other pastries, five or fewer; prepackaged bags of five ounces or less of chips, popcorn, nuts or trail mix.

Lamont says the DRS overreached in that assessment of what is taxable, and new guidance to grocery retailers will be issued shortly.

“This commissioner did what was right,” Fasano said. “This commissioner read it the way it should be read, and there is no argument about that. That’s not what we meant. Let’s go into special session and fix this.”

The Republicans are circulating a petition among lawmakers to call themselves into special session. To be successful, they need a majority of members in both chambers to sign on.

Klarides suggested the Democrats are being disingenuous, acting “shocked and appalled by what they wrote.”

What they wrote was the imposition of a one-percent increase in the sales tax:

“With respect to the sale of meals… sold by an eating establishment, caterer or grocery store; and spirituous, malt or vinous liquors, soft drinks, sodas or beverages such as are ordinarily dispensed at bars and soda fountains, or in connection therewith.”

The new budget provision referenced the definition of “meal” that already is in state law and did not revise it.

Democrats say that means that the Lamont administration is free to amend the public policy statement recently issued by DRS.

“Our members have been very clear on what the intent of the budget is and our position on DRS’ policy guidance,” said House Speaker Joe Aresimowicz, D-Berlin. “Based on the remarks from Gov. Lamont and his administration, we expect that they are going to move quickly to fix this misinterpretation.

“Should this issue not be resolved efficiently, then we will take the necessary steps in the legislature to ensure that our legislative intent is followed.”