The president of the Connecticut State Colleges and Universities system is growing “increasingly concerned” about whether funding will be available in time to start offering debt-free community college in the fall of 2020 as called for in legislation passed earlier this year.

In a letter to state legislative leaders, Mark Ojakian, president of CSCU, wrote  this week that his staff is developing guidelines to enact debt-free college but that he has growing concerns  “about the viability of its funding source as well as the timing of acquiring that funding.”

“If we are going to be successful, we need a guaranteed revenue source sooner rather than later,” Ojakian told the  Board of Regents for Higher Education at a meeting Thursday, to ensure that there is time to do “comprehensive marketing.”

Last week, the Board of Regents sent a formal request to Gov. Ned Lamont asking that an additional $20 million be included in the governor’s Fiscal Year 2020-21 budget adjustments schedule to fund debt-free community college.  The $20 million includes $2 million to plan and execute a marketing campaign to drive enrollment, $1.4 million for additional advisors and $16.6 million for student grants.

The legislation calls for the governor to consult with the Connecticut Lottery Corporation to determine the feasibility of using revenue from an iLottery as a funding source for debt-free college.

However, as Ojakian pointed out at the meeting, the iLottery has yet to be approved by the legislature.

“Further, should this enabling legislation pass next May,” Ojakian wrote in his letter to legislative leaders, “there will not be adequate time to begin a marketing campaign and collection of revenue to fund the scholarships in time for the fall 2020 semester.”

The legislation also requires that the the governor and the legislature allocate alternative resources for the program if the iLottery funds are not available or adequate.

A spokesman for the CSCU system said the request for $20 million was sent to the governor because that is how much will be needed to fund the program, whether it is done through the iLottery or some other source.

Chris McClure, spokesman for the Office of Policy and Management said, “We will continue to work with President Ojakian, his staff, and other stakeholders, to explore feasible options.”

As this proposal exceeds previous estimates of the cost of the initiative, as well as the proposed revenue source to support the initiative,” McClure said, “we must evaluate overall state revenue and spending elements and determine priorities within our limited available resources.”

Several months ago, an estimate from the Office of Fiscal Analysis said that debt-free college for all first year, full time students would cost $6.1 million in Fiscal Year 2021.

Sen. Will Haskell, D-Westport, co-chairman of the legislature’s higher education committee and a key proponent of  debt-free college, said he is not “particularly concerned that the iLottery will be insufficient once it is authorized. I would say I’m optimistic that it will be authorized in a timely manner.”

If the iLottery doesn’t come through, he said other funds will be found. “We can’t break this promise to students,” he said. “That’s just not an option.” 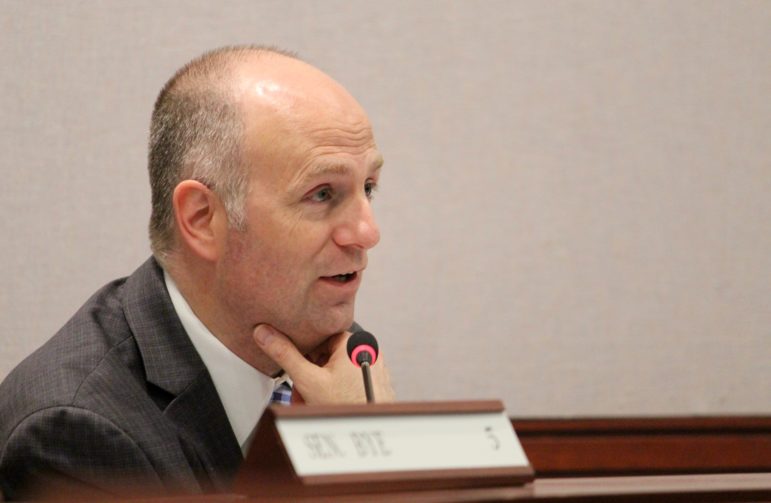 Another strong supporter of the debt-free college, Rep. Gregg Haddad, D-Mansfield, also co-chairman of the higher education committee, said that he was aware when the debt-free college legislation passed that the iLottery might not be in full operation soon enough to provide adequate revenues to fund the program.

“My assumption is that if the lottery didn’t produce enough revenue right from the ‘get go’ that [the governor] would determine in that case that it was feasible [to use the iLottery] but not adequate,” Haddad said, “and would have to propose some level of funding to bridge the gap.”

He said it could be the state would have to provide partial funding for a year or two until the iLottery is bringing in sufficient funds.

However, Haddad said, “I think everybody agrees that the goal that was set out is an important one and I have every expectation that my colleagues and the governor will meet our responsibilities.”

Haddad said that he and Haskell plan next month to start a tour of the state’s 12 community colleges to promote the debt-free college program.

Tara Chozet, director of public relations for the Connecticut Lottery, said that it would probably take a few months to get the iLottery up and running after it receives the necessary approvals from the legislature, the Department of Consumer Protection, and any other legal hurdles that might come up. She said it would be expected to transfer about $5 million to the general fund in the first year and $54 million over five years.

The debt-free program, if implemented, will be a “last dollar” offer providing first-time, full-time students at the community colleges with any additional money needed after they have exhausted government and private grant programs.

All students, regardless of their incomes, would be eligible for the program.

About 60 percent of the full-time students at the 12 colleges already are effectively attending for free with their financial aid and other assistance covering all tuition and fees.