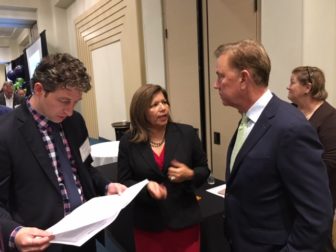 Gov. Ned Lamont with House Commissioner Seila Mosquera-Bruno and David Kooris of the Department of Economic and Community Development.

Cromwell — Gov. Ned Lamont made his first appearance Thursday before advocates and developers of affordable housing, an audience fearful of becoming squeezed by a “debt diet” that has tightened the funding spigot thrown open by his predecessor, Gov. Dannel P. Malloy.

Engaged in a standoff with the legislature over how to fund a 10-year transportation infrastructure plan, Lamont offered no hard promises of additional funding for housing, while assuring them Connecticut would continue progress in fighting chronic homelessness.

“We’re with you, and we’re going to keep fighting,” Lamont said.

Addressing the annual conference of the Affordable Housing Alliance, Lamont said transportation and housing were central to economic growth in a state that has lagged the nation in recovering jobs lost in the Great Recession of 2008.

Nothing has demanded as much attention as transportation funding in his first year in office, and the governor said good transit and highways were essential if Connecticut is to fully exploit its proximity to the “major international eco-system” that is New York.

“We’ve got to be able to get there,” Lamont said. “We’ve let that slip a little bit.”

One of the workshops at the conference focused on how the state’s inadequate transit system is a barrier to affordable housing development. Transportation Commissioner Joseph Giulietti and David Kooris, the deputy commissioner of economic development, were on the panel.

Connecticut was certified as eliminating chronic homelessness among veterans during the Malloy administration, and the most recent point-in-time census of homeless found 3,033 living on the streets or in shelters on a single night in January this year, the lowest number since the annual counts began in 2007.

That progress came as the state invested more than $1 billion in affordable housing since 2011, and government and non-profit agencies worked to better coordinate the availability of transitional shelter beds, affordable housing and a wide range of supportive services aimed at the “rapid re-housing” of people who lose their homes.

Lamont, who recently returned from a family wedding in California, told of his shock at the extent of homelessness he saw on the streets of San Francisco, but he said that the punitive approach threatened by President Donald J. Trump in recent days was not constructive.

The governor indicated he understood that curbing homelessness requires a network of providers. Lamont said he can vividly recall a conversation he had with a young man in New Haven during the campaign last year. Once homeless, the man was in his own apartment on his way to his first day at a new job.

“And this is what you do every day,” Lamont said, his voice soft. “These are the small differences that makes a difference. This is what they’ve got to do in California and other places. Put the billy club away. Go talk to these people.”

But he told reporters later that he intended to keep a lid on borrowing until he knows if the diminished special transportation fund will have to be supplemented by general-obligation bonding, as Republicans proposed in “Prioritize Progress,” an alternative to tolls.

The governor’s message was not all his audience wished to hear, but there was an appreciation that the Lamont administration considers housing a priority and wants to engage developers and other providers of housing services. 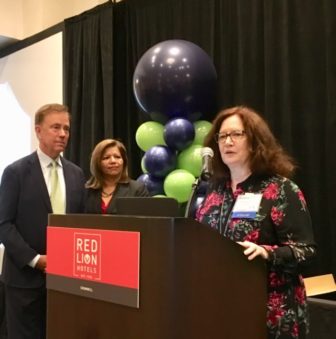 “We heard today that he wants to partner with us,” said Florence Villano, the executive director of the Affordable Housing Alliance. “It was good to hear that he understands that at the end of the day, your address defines who you are and how your life goes. And if you don’t have a decent, safe and affordable place to live, the rest of your life is impacted — and not in a very positive way.”

But money remains a central issue.

The new administration cut the department’s capital spending request from $252 million to $4.5 million in its first year. While previous bonding allocations remain in the approval pipeline, much of it is committed and developers say they need to see the flow of funding will continue for them to explore projects that can take years to reach fruition.

“It’s very complicated. There are layers of funding that need to be put together. It doesn’t happen in a day. Some of these projects take years, most of them at least two or three years and some start long before that and finally get to the funding stage,” Villano said. “If you have a piece of property or you have your eye on a piece of property that you want to develop, are you going to spend two or three years putting it together if you don’t think there is going to be funding at the end of that?”

Seila Mosquera-Bruno, who directed a non-profit developer of affordable housing in New Haven before becoming Lamont’s housing commissioner in February, said the administration was finding funds other than general-obligation bonds for affordable housing, including federal Community Development Block Grants.

The commissioner said she was working on getting “our house in order,” making changes that would streamline the approval process for funding.

Miguel Rivera, the director of housing and community development at the Department of Housing, used humor to reinforce the message that the agency was trying to be a better partner.

At a workshop on funding opportunities, Rivera showed an image from “Jerry Maguire,” the Tom Cruise movie about a sports agent on the make. The image was a meme from the internet, Maguire’s pitch to would-be clients: “Help me help you!”

From the audience, a woman replied with a more memorable line from the movie.

“Show me the money!”