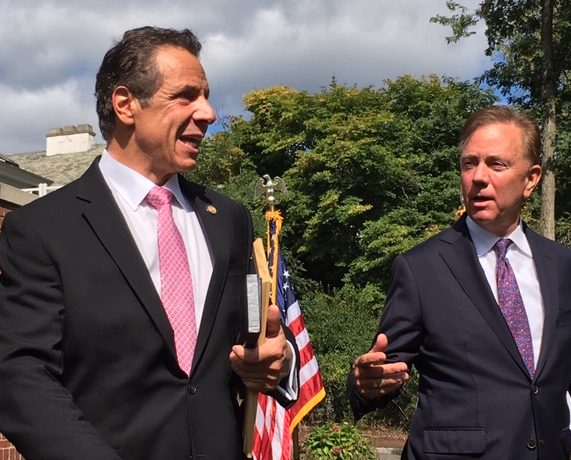 Govs. Andrew M. Cuomo and Ned Lamont outside the Executive Residence in Hartford.

Gov. Ned Lamont is exploring a ban on flavored vaping products as part of a multi-state effort to regulate e-cigarettes and recreational marijuana use.

“I don’t know what I can do by executive order, but I’m going to be very strong going forward,” Lamont said of the prospects of a ban on flavored e-cigarettes.

If an executive order isn’t feasible legally, the governor said he could ask legislators to enact a ban in special session this fall, or during the regular 2020 session.

Massachusetts Gov. Charlie Baker declared a public health emergency this week and ordered a four-month ban on the sale of all vaping products.

The U.S. Centers for Disease Control and Prevention has reported 530 cases of people who’ve developed severe lung illnesses after using vaping products and is expected to announce more cases next week.

Lamont joined Cuomo in a mid-day press conference outside the Connecticut governor’s residence, and both executives said the issue demands a regional response.

“It makes no sense to pass one set of rules in New York when they can just drive across the border to Connecticut and have a different set of rules and vice versa,” Cuomo said.

The New York governor also said a comprehensive approach does not mean all states must enact identical rules and regulations.

Lamont said that if Connecticut is going to work with its neighbors to develop a comprehensive approach to vaping, it will have to change its approach to cessation programs.

Since 2000, Connecticut has received more than $2 billion as part of a multi-state legal settlement with the nation’s five largest tobacco manufacturers.

But only about $200 million has gone into the Tobacco and Health Trust, a special fund set up by legislators to fund anti-tobacco efforts. And lawmakers ultimately raided more than $113 million of that $200 million to help with budget-balancing efforts.

By 2018, legislators had suspended indefinitely any contributions to the trust program.

Connecticut also is tied with New York for the second-highest cigarette tax in the nation at $4.35 per pack. This brought $366 million into Connecticut’s coffers last fiscal year.

The Centers for Disease Control and Prevention says Connecticut needs to spend $32 million annually on cessation programs. Between 2000 and the suspension of the trust’s funding, Connecticut had spent less than $30 million in total from this settlement on cessation efforts.

If Connecticut is going to work with New York — and possibly other states — to shield youth from tobacco and vaping products, it will have to increase funding for cessation, Lamont said.

“I know that over the last 10 years we’ve been siphoning off some of the money that’s supposed to go to tobacco cessation to other things,” he said. “That’s going to stop.”

Bryte Johnson, Connecticut director of government relations for the American Cancer Society Cancer Action Network, said a ban on all flavored tobacco products cannot be the only part of a regional policy to stem tobacco and e-cigarette use.

“We must also look at preventing youth initiation in the first place, and helping current tobacco users quit,” Johnson said. “This is why it’s so critical that the state properly fund its proven tobacco control and prevention programs. We all have a part to play in helping tobacco users quit and preventing youth from ever picking up this deadly addiction, and comprehensive policy changes – including fully funded tobacco control and prevention programs – are a critical part of winning the war against Big Tobacco.”

Lamont could face one hurdle this fall, though, should he seek a special session on vaping issues.

Sen. Cathy Osten, D-Sprague, co-chairwoman of the Appropriations Committee, said devoting more funds for cessation efforts is “a great thing,” but said she isn’t ready to consider this, or any other issue, until Lamont and the legislature complete negotiations on a new state bond package.

The governor and fellow Democrats in the legislature’s majority have been at odds for months over how much Connecticut should borrow over the next two fiscal years for transportation infrastructure work and other capital projects.

“I’m not on board for doing anything else until we finish this,” Osten said.

The administration remains in talks with lawmakers on the bonding issue, but Max Reiss, the governor’s communications director, said “Governor Lamont is not going to turn this into a political football. He’s not going to play politics with people’s health and well-being.”

Lamont and Cuomo said they also envision a regional approach toward regulating any recreational marijuana sales.

Both Connecticut’s and New York’s legislature considered legalization this past year, but neither acted. Still, officials from both states have said the debate likely will be revisited, possibly as early as in 2020.

Marijuana can be smoked, vaped or consumed in a variety of products. And Cuomo said this “poses the same constellation of issues” as e-cigarettes.

Certain marijuana products, such as those similar to gummi candy, might appeal more to children, yet still — depending on how it is processed — could be high in THC, or tetrahydrocannabinol content. THC is the principal psychoactive component of cannabis.

Cuomo added that he and Lamont have agreed to meet again on Oct. 17 to continue development of multi-state proposals for regulation of vaping and marijuana products.