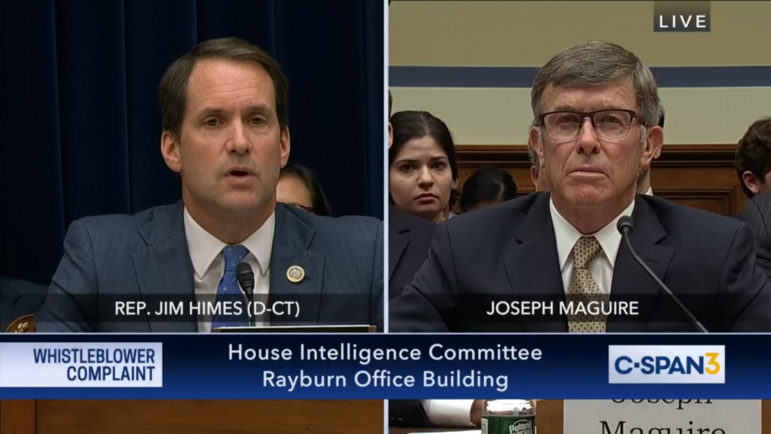 Rep. Jim Himes asked the national intelligence director about his handling of the whistleblower complaint about the president.

Washington – Rep. Jim Himes on Thursday asked the nation’s top intelligence official if he consulted with President Donald Trump about a whistleblower complaint that could lead to the impeachment of the president, but the Connecticut lawmaker did not receive a clear answer.

“Did you speak to the president about the complaint?” Himes, 4th District, asked during a high-profile hearing of the House Intelligence Committee on the complaint that Trump pressured the Ukrainian president to investigate former Vice President Joseph Biden and his son, Hunter.

“But, just so we can be clear for the record, you are not denying that you spoke to the President about this complaint?” the lawmaker asked again.

Maguire said that he could not “divulge privileged conversations that I have as the Director of National Intelligence with the president.”

Maguire also testified that it was that same executive privilege that kept him from providing members of the congressional intelligence committee with the whistleblower’s complaint last week, a denial that incensed Democrats and pressed House Speaker Nancy Pelosi to launch a House impeachment inquiry of Trump.

That impeachment inquiry is backed by the seven members of Connecticut’s congressional delegation, all Democrats, and, as of last night, a majority of U.S. House members.

Over three hours of testimony, Democrats hammered Maguire for saying he could not turn over the whistleblower’s complaint until he consulted with officials at the Justice Department and the White House. Lawmakers said it was improper to take the complaint to subjects of its allegations and argued the federal law explicitly demands that the DNI “shall” transmit whistleblower complaints to the intelligence oversight committees.

“I just thought it would be prudent to have another opinion,” Maguire said.

Committee Chairman Adam Schiff, D-Calif., said the way the complaint was handled would have a chilling effect on other federal whistleblowers “if the subject of a complaint can stop a complaint from getting to Congress.

On Thursday, the whistleblower complaint that has roiled Congress and the White House was made public.

The complaint said White House officials expressed alarm after they witnessed Trump “abuse his office for personal gain” during a phone call with Ukrainian President Volodomyr Zelensky on July 25.

“This interference includes, among other things, pressuring a foreign country to investigate one of the president’s main domestic political rivals. The president’s personal attorney, Mr. Rudy Giuliani, is a central figure in this effort. Attorney General Barr appears to be involved as well,” the complaint says.

The whistleblower also said White House officials who listened to the call were “deeply disturbed” by Trump’s requests that Zelensky investigate the Bidens and revisit claims related to the 2016 election. 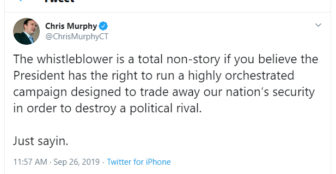 The whistleblower said about a dozen White House officials were on the call and  tried to “lock down” records of the phone call. He said the transcript was “loaded into a separate electronic system that is used to store and handle classified information of an especially sensitive nature.”

Trump continued Thursday to say he has done nothing wrong.

“A whistleblower with second hand information? Another Fake News Story! See what was said on the very nice, no pressure, call. Another Witch Hunt!,” the president tweeted.

Connecticut’s Democratic senators, however, said the unknown whistleblower’s complaint is yet more evidence of wrongdoing.

“This whistleblower complaint is a still-smoking gun – containing stark, stunning evidence of ongoing criminality and cover-up,” said Sen. Richard Blumenthal. “The complaint outlines in powerful detail a concerted, premeditated campaign of corruption and criminal conduct by President Trump and members of the administration.”

Blumenthal also said the White House tried to hide President Trump’s illegal activity “by misclassifying call transcripts and moving the evidence to a separate server” and that the president’s actions have undermined government efforts to deter and counter foreign interference in U.S. elections.

“Put simply: members of the Trump administration knew they were doing something deeply wrong, so they tried to conceal it – and now, they’ve been caught red-handed,” Blumenthal said.

Sen. Chris Murphy said “the president of the United States engaged in a massively corrupt act and he admitted to it.”

“President Trump urged a foreign government to investigate his political rivals and directly encouraged them to coordinate with his campaign operatives—all in plain sight,” Murphy said.

Like Trump and many lawmakers from both sides of the aisle, Murphy took to Twitter to debate the scandal.

“The whistleblower is a total non-story if you believe the president has the right to run a highly orchestrated campaign designed to trade away our nation’s security in order to destroy a political rival. Just sayin,” Murphy tweeted on Thursday.

Republicans on the intelligence panel on Thursday defended the president, dismissing the significance of the complaint and the president’s phone call to Zelensky.

Rep. Devin Nunes of California, the top ranking Republican on the intelligence panel, derided the whistleblower’s complaint as “fake news” and accused Democrats and journalists of a conspiracy to manufacture baseless allegations against the president.

Nunes also called the complaint and press coverage of it an “information warfare operation” against the president.

Himes called the GOP line of questioning “fantabulistic conspiracy theories” that are politically motivated to shield the president.

After the hearing, Himes said in a statement that he “entered today’s Intelligence Committee hearing looking for answers about the role that the White House, Justice Department, and president’s personal lawyer played in the President’s alleged solicitation of election interference.”

“Unfortunately, I left the hearing with more questions than answers, muddled by murky claims involving executive privilege and shifting blame,” Himes said. “But let this much be clear to the American people: It goes against every notion of justice and transparency that a whistleblower complaint would be taken to the subject of that complaint, in this case the White House, for its review and approval.  It is a perverse twisting of the process.”